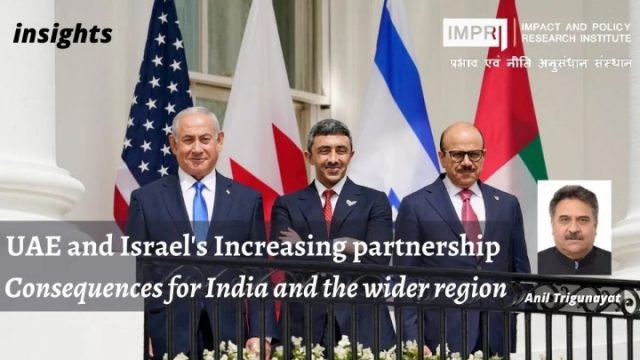 Rarely does one see such a hectic and focused diplomatic engagement as is between UAE and its new partner Israel. A little over a year ago the famous Abraham Accords were signed with UAE becoming the first Gulf country to normalize diplomatic relations with the Jewish state. Bahrain, Morocco, and Sudan followed and others are managing the interactions and security ties with Israel in camera or without formal engagements.

Decades ago Egypt and Jordan had led the path in a different context by signing Peace treaties with Israel when the situation with regard to Palestine looked tractable. However, wayward his diplomatic style may have been former US Trump and his son-in-law and senior Adviser Jared Kushner could take credit for remaining engaged with the Middle east until the end when the landmark Abraham Accords (encompassing the Abrahamic religions) signed and even the rift and blockade between Qatar and Quartet lifted. It has become a game-changer.

New Israeli President Herzog was in the UAE on the first-ever official visit (January 30) to meet with Crown Prince Sheikh Mohammed bin Zayed Al Nahyan in Abu Dhabi to discuss bilateral and regional developments as the host country was busy deflecting and intercepting the spate of missiles from Houthis of Yemen who are accused of being Iran backed and supported.

He also visited the Dubai Expo 2020 where Israel has been participating and displaying its expertise in a big way. Sheikh Mohammed bin Rashid Al Maktoum, Vice President and Prime Minister of the UAE and Ruler of Dubai also hosted President Herzog in Dubai and held detailed discussions.

This has only been one of the many important visits including that of Prime Minister Naftali Bennet in December and Yair Lapid the Foreign Minister. Nearly every week an Israeli or Emirati delegation has been visiting each other to cement the ties and identify newer opportunities in defense, security, trade, investment, and tourism.

No wonder in one year over 2,50,000 Israelis has visited the Emirates. Even on the trade and investment, the track record is pretty good as the institutionalization of relationships undergoes a qualitative change. President Herzog averred “Already our trade has exceeded over $1 billion, more than 120 agreements were signed, and a $100 million (research and development) fund was established recently”.

However, while cyber security cooperation and standard technology transfer and counter-terrorism is moving apace, some reports indicate that on the advice of Israeli security agencies and possibly that of the US establishment

(suspended the sale of F35s to UAE which then had to go in for the French Rafael fighters) defense and advanced weaponry like its famous Iron Dome air defense system (served well during the recent Israel-Hamas war) or David’s Sling weapon systems, despite the UAE and Saudi Arabia facing the onslaught of Houthi drone and missile attacks.

However, President Herzog assured the Emirate of fullest security support against the terror attacks including those perpetrated by Houthis even though Iran was mentioned by name. Earlier, Israeli Prime Minister Naftali Bennett in a telephonic discussion with the Crown Prince condemned the attacks.

He announced that all the necessary support would be provided to UAE to counter such terrorist attacks. Apparently, Bennett also ordered the Israeli military to be ready for this purpose.UAE is carving itself as a model of tolerance and co-existence of all religions and faiths.

It organizes a World Tolerance Summit annually. Apart from hosting Pope and providing land for a Hindu temple during PM Modi’s visit, the UAE authorities had agreed to build a Synagogue as an integral part of the interfaith compound.

“I wish him well and I am grateful for his courage and bold leadership, carving out a peace agreement with Israel and sending a message to the entire region that peace is the only alternative for the peoples of the region.

“However, as expected the Iranian Foreign Ministry spokesman Khatib Zadeh condemned the visit calling it as “Invasion, expansionism and crisis-making are part of the nature of Israel’s policy”. He described the normalization of relations with Israel as a source of “rift-making in the Islamic and Arab worlds”. Arch-rivals and historic Palestine — Israel conflict will continue to dent the smooth sailing.

First Published in CNBC TV 18 as UAE and Israel’s burgeoning partnership; Implications for India and wider region on 3rd February 2022