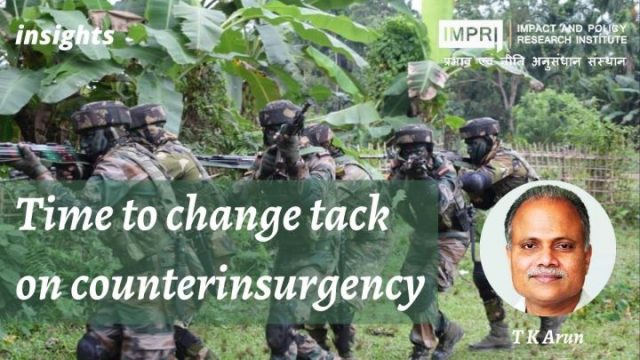 The Armed Forces (Special Powers) Act (AFSPA) must be scrapped, and counterinsurgency operations entrusted to the local police, who, in turn, must be retrained and re-equipped for the purpose. Democratic politics must give ordinary people a visible stake in peace and integration. This is not a novel idea but one whose crying need is once again underlined by the killing of 14 civilians and a soldier in Nagaland last week.

If an insurgency that has been active as long as India has been independent could not be quelled by the use of force over decades, should not the government change tack, and take another approach? Doing exactly the same thing over and over again, expecting different results, we know, is one definition of insanity. Why does government policy turn insane in Nagaland, the rest of the Northeast, and in Kashmir, where state violence begets and feeds alienation, and chases the goal of integration farther away?

Sure, there have been talks, attempts to find solutions and accommodate the majority of the disgruntled into a framework they could accept, if not quite celebrate. There would be a minority that refuses to go along and actively seeks to sabotage any such agreement to end conflict. They must necessarily be tackled by force. However, only those saboteurs articulating the will of a tiny group should be targeted by the state. Yet, time and again, the forces of the state assault ordinary civilians, create fresh outrage and the peace process collapses.

In his book of rich reportage from the ground, Despite the State, M Rajshekhar describes the operation of the Armed Forces Special Powers Act in Manipur, how it becomes not just a shield for arbitrary use of force by security personnel but also a means of subjugation of ethnic minorities by the dominant elite of the region.

The tools the state hands over to security forces and those who control them to suppress insurgency morph into permanent instruments of control and unaccountable exercise of power. People develop a vested interest in continuing to use them and are happy to keep an insurgency going, since that is the precondition for continued availability of those extraordinary powers.

Would scrapping AFSPA automatically end insurgency in the Northeast or Kashmir? Absolutely not. However, in the absence of AFSPA, there would be no ‘ketchup colonels’ who pick up civilians, kill them in cold blood, pass off their dead bodies as those of infiltrating militants from across the border and seek medals and promotions. There would be no burning of villages by security forces to teach errant villagers a lesson, no rape and rapine that create permanent hostility.

The one insurgency that India has successfully stamped out is the Khalistani one in Punjab. High-profile deployment of the army and paramilitary created much damage to the Sikh psyche, without ending the militancy. Finally, it was the Punjab Police, led by KPS Gill, given arms, authority and funds by the Centre that finished it off.

The point is not to hold up the manner in which the Punjab Police and Mr Gill carried out that task as a faultless exercise in precise counterinsurgency. There were gross and probably avoidable violation of human rights and excesses. The point is to draw the right lessons from that successful counterinsurgency operation: local forces, with local intelligence, clear understanding of the psyche of both militants and the local populace, and, vitally, a stake in the local community and society in which they carry out necessary violent acts succeeded where central forces could not.

Khalistan lives on in the imagination of some isolated geriatrics abroad, who, in the age of social media, are able to broadcast their ambitions to the world. But their baying produces few howls of support in Punjab, where democracy gives people the assurance that they can shape their destiny within the framework of the Indian nation, to build and protect which, the people of Punjab, Sikhs in particular, have shed more than their fair share of blood.

Half-hearted acceptance of the systemic vested interest non-local agents develop in an insurgency has produced commissions of inquiry into excesses by the security forces, which ultimately come to nothing. But the overall framework of combating insurgency continues. And keeps insurgency alive.

Can state level polities be trusted to counter the insurgency in their territory? Distrust and deployment of ‘reliable’ central agencies have not succeeded. It is time to give local authorities and local forces the lead. The Centre must offer support, and not just when insurgency spreads across states, as in Manipur and Nagaland.

The Northeast is far more integrated into the rest of India than in the years immediately after Independence, when insurgency took root. Young people study and work in India’s large cities, find acceptance and friendship, even if that experience is marred by the Hindi-Hindu-Hindustan variety of chauvinism that colors the attitude of many, who cannot, thanks to that jingoism, distinguish between difference and aberrance. Politics that feeds such chauvinism fuels the grievance that underlies the insurgency.

Democratic politics that accepts the authenticity of the people in India’s frontier states in their specific differences from the majority must dare to trust local governments and local institutions to win over hearts and put down incalcitrant troublemakers. Local politics must turn democratic, to ensure that those elected to office are held to account, and do not give in to the temptation to benefit from the various ways in which perpetual insurgency offers those put in charge of combating it.

AFSPA is necessary because of the deployment of central security forces. Both must be removed from the arena of counterinsurgency, and local politics and its institutions, including those that use force, must be strengthened and enabled to succeed.

This article Time to change tack on counterinsurgency first appeared in The Federal on 7th December, 2021.