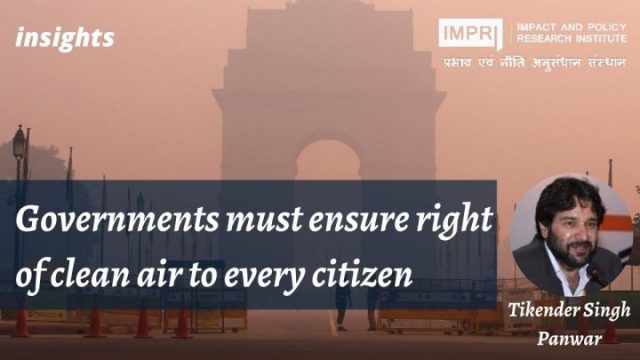 ‘Back in the severe zone, Delhi air worst in country; ‘No need for 28-member without teeth, says Supreme Court’; ‘Local sources largely to blame for pollution’; and ‘Schools shut again as air quality turns severe – Decision comes after SC rap’ were some of the headlines that dominated the national newspapers in the capital in the first week of December.

Delhi’s Air Quality Index (AQI) was 429 on December 2, meaning the air was too polluted to venture out. But do labourers, street vendors and daily wagers, part of the informal sector, constituting nearly 80% of Delhi’s workforce, have an option? Unlike people working from home and who can afford air purifiers, these workers must go out for livelihood.

The situation is not limited to Delhi; five other Indian cities figure in the list of the 10 most polluted cities in the world. Urban development and pollution are intrinsically linked. Most Indian cities are in ramping up their infrastructure by reducing the space for pedestrians and cyclists.

Air pollution affects several body organs. Dr Anant Mohan, head of the pulmonary medicine department, All India Institute of Medical Sciences, Delhi, says, “The respiratory tract is most affected. Nose irritation, inflammation and infection of the sinuses, sore throat, shortness of breath, cough with phlegm are short-term effects. The long-term impact could be permanent damage to the lungs and shortened life.”

Exposure to polluted air may affect the growth of lungs in children, Mohan said adding, “such cases have risen by 20%-25% with the increase of polluted air.”

Despite the efforts of the National Green Tribunal (NGT), the Delhi High Court and the Delhi Pollution Control Committee to control pollution, the situation has turned from bad to worse. The NGT had directed the ministry of environment to modify the National Clean Air Programme, 2020, which aims to achieve a 20%-30% reduction in particulate matter concentrations by 2024 keeping 2017 as the base year for the comparison of concentration, but action is awaited.

Governments can and should reorient their policies to ensure clean air for every citizen. Both Leipzig (Germany) and Beijing (China) have done excellent work in shifting the reliance on automobiles by strengthening their public transport systems. Since 66% of the pollutants emanate from automobiles, this concern should be addressed immediately.

Leipzig, where I did a fellowship on urban mobility, has a very high percentage of the population using bicycles and public transport. The city, which has an AQI of 9, plans to make public transport free of cost to dissuade people from using private vehicles.

In one of the presentations, a professor told us that the eight-lane road passing through the city was being reduced to six with the remaining two reserved for cyclists. But there is a paradox: despite 25% of its residents commuting on bicycles, the city sustains its economic growth by manufacturing one of the costliest cars, Porsche.

I asked the professor, “If you are squeezing your roads and handing over the space to pedestrians and cyclists, then for whom are you manufacturing these cars? Prompt was the reply, “For you!” Nothing can be more apt to understand why India is pushing for creating more infrastructure for motorised transport while squeezing the space for pedestrians.

During a training programme in Beijing to understand its urbanisation process a few years after the Olympics, we often asked how the Chinese capital controls its pollution? The city focussed on three areas: urbanisation, restricting the use of private vehicles and simultaneously increasing public transport and the responsibility of governance and decision-making.

Beijing practised massive mixed-land use spatial planning, which ensured more space for public transport. The urbanisation plans were drawn in a comprehensive manner, meaning Metro links were already operational before the completion of housing complexes. The city plans to almost double its 550 km Metro line—Delhi has 380 km—to 1,000 km. Beijing’s bus fleet is nearly 30,000 as against Delhi’s 5,000. In China, public transport is used in 72% of commuting compared to India’s 18%.

Another major stumbling block is the multiplicity of governance, which doesn’t allow the Delhi government to function independently. Recent legislation has further curtailed the role of the elected government and strengthened the lieutenant-governor.

Another major flaw in Delhi is the dominant role of the Delhi Development Authority (DDA), a parastatal body directly under the Union government, in planning. Beijing’s approach to urbanisation by planning the city’s development with an integrated approach is completely missing in Delhi.

There is frequent mismatch between the DDA’s land use plan and the infrastructure laid out by the Delhi government with regular digging for construction of flyovers and underpasses.

Governments cannot be callous in ensuring clean air to their citizens. Many people feel that it is becoming impossible to live in Delhi.

“Hell is a city, much like London—
A populous and a smoky city;
There are all sort of people undone,
And there is little or no fun done;

Small justice shown, and still less pity”, wrote the famous English poet Percy Bysshe Shelley in his poem Hell almost two centuries ago. What Shelly had witnessed then, we are perhaps witnessing now. But this has to end for a better sustainable future for all.