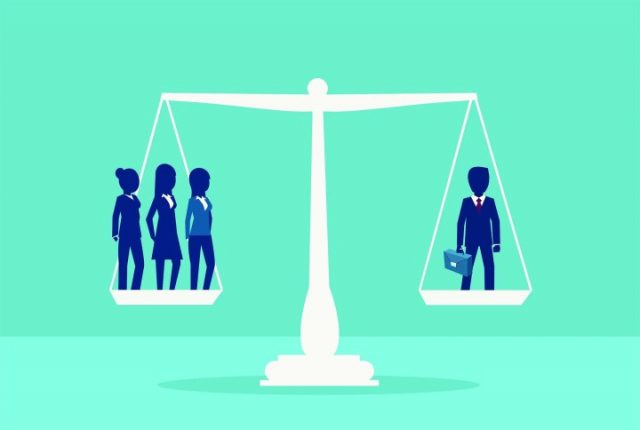 Under the series, The State of Gender Equality– #Gender Gaps, Gender Impact Studies Center (GISC), IMPRI Impact and Policy Research Institute, New Delhi organized #WebPolicyTalk on the topic The State of Discrimination: Sub-National Comparison of Legal Barriers to Women’s Right to Choose Work in India with Bhuvana Anand on July 1, 2022. Ms Bhuvana Anand is the Co-Founder and Director at Trayas. The session was chaired by Prof Vibhuti Patel, a Visiting Professor at IMPRI & Former Professor at Tata Institute of Social Sciences (TISS), Mumbai.

Prof Vibhuti Patel discussed the relevancy and urgency of the discussion of gender issues as most of the discussions only focused on macro realities. She had given a layout to discussions through her precious views. She criticized the poor representation of women in the economy and lower status in society and reiterated that discrimination against women in the workforce is informed by systems and structures of patriarchy and male domination in practice legitimized by the rules both written as well as unwritten rules at the time under the garb of safety or outright denial without any explanation.

Women are not allowed opportunities for skill training and become the first targets of retrenchment when mechanization automation rationalization takes place. Prof Patel believes that the women’s rights movement for over four decades brings out very succinctly how these gender norms perpetuate male domination and female subordination in the economy. With a poem verse, Prof Patel directed the participants to think again about the attitude people keep toward women. Further, she welcomed Ms Bhuvana Ananda to share her views.

Ms Bhuvana had given a brief review on the evolution of the state of discrimination report and then she shared the key findings. The report shows that men’s labour force participation is three times higher than women’s. Women’s participation has declined over time, which means that they aren’t staying in the job course for long periods of time despite the fact that the education levels among women are rising & fertility levels are falling. Ms Anand identified several supply-side factors which are responsible for lower participation rates. It includes marriage, household income as families are perhaps getting more prosperous so they don’t want both partners to earn, childcare responsibilities and the general family that may be more likely for low and declining demand for female workers.

Therefore,  the state of the discrimination report had focused on one element of demand-side factors i.e., employer behaviours, employer stereotypes,  the costs potentially that are coming up from protective legislation, or lack of awareness about the value edition that women provide. The report has tried to compare 23 states with some parameters. Ms Bhuwana believes that keeping women away from the labour force is practically expensive. The McKinsey report suggests that approximately 700 billion to the economy by 2025 will drastically increase women’s labour force participation and all of this feels like a good set of reasons to focus on this problem. She attempts to describe the measurement approach taken in the report to highlight a few things.

One is to think of states as autonomous actors or as actors who can certainly have a role big role to play in determining the faiths of individuals in this country and the second is to understand the rule of law and regulation in India just to demonstrate how impossibly hard it is and what kind of effort going in and the third is to about how to make something distillable and usable by creating you know some kind of buzz around it or some kind of numbers that are valuable and aspirational for different state actors. She further discussed India’s wide state of discrimination and state performance on four types of legal restrictions on women including working at night, working in jobs deemed hazardous, working in jobs deemed arduous, and working in jobs deemed morally inappropriate. Further, she discussed the laws that treat women as exceptions. She recommended that institutions need to rethink legislation. Prof Vibhuti Patel thanked her for her insightful views. She presented her views on the situation in 1982 when economists interested in women’s issues groups had fought against the language used in the labour department ministry.

Dr Yamini Atmavilas‘s notion is that all of us as feminist economists and social researchers have continuously sort of underscored but it needs to be said again, unfortunately. Norms are not something that is just in the private domain, they’re not just about something that happens within the household and the community, they are in the markets. The laws seem to be positioning women as workers and have certain definitions of them and they seem to constrain and take a protectionist view and be very exclusionary. So, what we end up with is very critical. Changing laws can be an incredible change in norms and society itself. As we sort of start to see changes in legislation then society and norms also change.

Further, Dr Anisha Sharma said that due to various norms driven around, the tendency pushes women to work in a very limited sector which pushes them away to acquire skills in areas where they can get jobs that are relatively more productive and that actually pay more. Hence, there is a need to expose not only women but also their families to job opportunities that open up after learning any skill such as data entry or computers. Such exposure makes the women enthusiastic to acquire skills and learn something. There is a need to invest in skills and diversify the sectors. Laws should be made compatible to meet these needs as well.

Responding to Dr Meenakshi’s question on the lack of awareness of employers due to paternalistic patronization, Dr Yamini said that there is a need to think about where one should intervene so that it will be beneficial for all. If we want to make entrepreneurs part of the change, there is a need to understand the cost of appointing women. State comparisons are also a must to understand the support to women to raise them, a broad framework where all employers must negotiate to work out cost benefits and numbers relevant. Further, the Panel addressed various queries of participants and enriched the event.

Acknowledgement: Priya Suman is a research intern at IMPRI.

Youtube Video for The State of Discrimination: Sub-National Comparison of Legal Barriers to Women’s Right to Choose Work in India on IMPRI #WebPolicyTalk