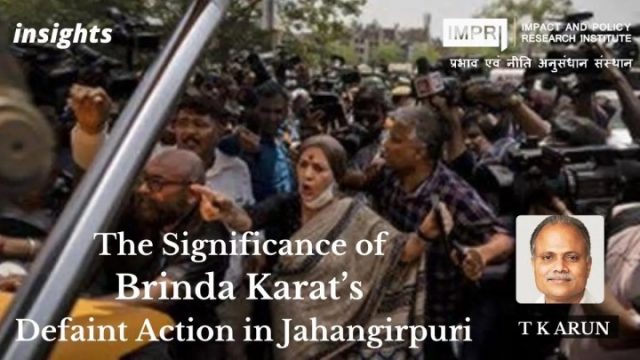 Her action demonstrates to others, who claim to oppose the BJP and its sectarian politics, what it takes to carry out meaningful political intervention

When Communist leader Brinda Karat stood in front of a bulldozer, in the blistering sun on April 20, waving a Supreme Court order and asking the machine operator and those conducting the demolition drive at Delhi’s Jahangirpuri to stop, many saw in her defiance physical courage and the courage of political conviction. Their eyes did not deceive them. But to interpret her action as one of individual courage is to occlude its true significance.

Brinda Karat’s interruption of a demolition drive that the Supreme Court had that morning stayed should be understood, primarily, as quintessential political action. Politics is mediating between the state and the people. Here was the state tearing down structures belonging, primarily, to Muslims, in a locality that had seen recent communal clashes, for which the police had rounded up 17 people, 15 of them Muslims, in blatant disregard of widely available video footage of a so-called religious procession, in which saffron-clad young men were brandishing swords, baseball bats and even firearms. To represent the interests of the people targeted by this partisan state action, politics had to stop that demolition. Brinda Karat performed that function.

A statement condemning the demolition would have come after the deed had been done.
So would the jaded responses of our political class to such atrocities: a dharna, a speech, a march and a call for a general strike weeks later that would be observed more in the breach. An appeal to the Municipal Corporation carrying out the demolition did not have the time to take effect, in the unlikely event of there being any readiness to hear such a petition. The only action that could stop the demolition was physical intercedence by political activists. Brinda Karat provided that.

She had the backing of an order from the highest court of the land. This meant that the judicial system was prepared to give the owners of the property slated for demolition a fair hearing. Its order was binding on the executive branch of the government.

Brinda Karat’s bold stance in front of the bulldozer (strictly speaking a backhoe loader, and not a bulldozer) thus represented democracy at work: timely political action mobilizing different organs of the state to offer a section of the people, who have reason to believe they are being victimized by the state, relief from such oppression.

This gives people faith in democratic politics, and hope in the institutional mechanism of regulating state power. The consequence of killing such faith and hope is to drive people to action beyond the pale of constitutional protest.

Brinda Karat belongs to a tiny political party, the Communist Party of India (Marxist). That a godless party’s leader should come to the defense of Muslims sends out another message: political succor comes not from religious mobilization but from democratic solidarity. That, too, should strengthen the incentive for the victims of communal politics to rally around democracy, rather than burrow further into a ghetto of isolation and resentment.

These aspects of Karat’s blocking of the Jahangirpuri demolition transcend the specifics of the act. Her party is not going to suddenly rise above whatever shortcomings had made it a marginal player in India’s polity. The direct beneficiaries of her intervention are unlikely to waster their votes on a candidate of the CPI(M) in the next election when voting for another party’s candidate is clearly more likely to get the BJP defeated in their constituency.

But her action demonstrates to others, who claim to oppose the BJP and its sectarian politics, what it takes to carry out a meaningful political intervention. If leaders who have come to believe that their earnest tweets in the morning represent the totality of their political responsibility can appreciate the value of political action, Brinda Karat would once again have illustrated why the Left in India throws a punch far above its actual weight.