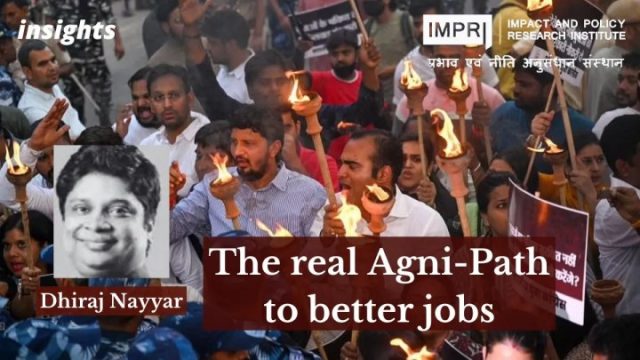 The era of the permanent job is fading away. But the time has not yet arrived of (sufficient) high-wage good jobs. That is the bind that India finds itself in. The paradox is that while at least some people are willing to agitate about the former, there is little appetite to publicly support the kind of policy reform that will create the latter. The fact is that the creation of a small labour aristocracy cannot be enough to fulfill the aspirations of all Indians. It’s time to let go of the past and embrace the future.

It is curious to note the stiff opposition to the Government’s eminently sensible Agnipath scheme for recruitment into the armed forces. Critics say that it will create fewer permanent jobs in the armed forces. The truth is that for soldiers below the officer cadre there are no “permanent” jobs.

Retirement arrives when soldiers are in their mid-30s. What is a fact is that there will be fewer “pensionable” jobs as 75% of recruits will be retired within four years. That said, the discharged recruits will leave with a cheque of Rs 11.7 lakh, with a stint in the Army/Air Force/Navy on their CV. The probability of “retired” 25-year-olds finding new career opportunities is much higher than retired 35-year-olds (the current system). The latter may have a pension, but that is not enough to care for a young family.

Perhaps the real fear is that Agnipath type schemes may be rolled out for other Government employment in the future. That ought to happen, in spirit if not letter. All civil service recruits could be guaranteed a 10 year tenure after which only the most meritorious 25% continue in service. Such a system would apply not just to the elite services but across the board in the civilian bureaucracy, including the almost zero productivity Group D jobs.

It would be the best way to cut down on the size of bureaucracy, reduce the average age, increase the energy of the bureaucracy and also enable the most competent persons to occupy higher positions at a relatively young age and for longer periods.

A government job is coveted in India not just for its permanence but also for the vast benefits that come with it, including free healthcare and subsidized housing. At the lower levels of Government, the wages and benefits are much higher than a comparable job in the private sector. Hence, there is a mad rush to apply for vacant government positions, as will happen for the 10 lakh positions the Government has promised to fill up in the next 18 months.

Whether or not the Government extends the logic of Agnipath to the civilian bureaucracy, what is amply clear is that Government jobs cannot possibly meet even a small fraction of the requirements of the 8-10 million of new entrants into the workforce every year. Job creation has to take place in the organised private sector. But there is no great public support for measures to enable the private sector to do so.

The farm laws which would have raised agricultural productivity and opened new markets for farmers, thus improving their incomes (and creating better jobs for landless farmers) were stalled by a vocal minority. Earlier, in 2015, the Modi Government was forced on to the back foot on amending land acquisition laws which would have made it easier for industry to acquire land for building large factories.

The very mention of hire and fire in the context of labour laws sends the entire polity into a tizzy. Other growth and job enhancing measures like privatisation also receive lukewarm support. So, everyone wants good jobs which pay well but are unwilling to vocally support an ecosystem that will create those jobs in large numbers.

Instead, everyone complains about an unemployment problem, which is strictly not true. In India, people cannot afford to be unemployed. What we have is under-employment or poor quality jobs. That isn’t surprising, given that 40% of the workforce is in agriculture, producing just 14% of GDP and that 80% of the workforce is engaged in the unorganised, informal sector, which is characterised by low wages and no benefits. The highly skilled get good jobs, but they have to work very hard to keep them. A tiny labour aristocracy gets the comfort of well-paid permanent jobs with little accountability. Needless to say, that aristocracy would like to perpetuate itself.

The silent majority who are neither highly skilled nor likely to get a government job must see this reality and begin to bat in a T20 fashion for an ecosystem which enables the creation of good, well-paid jobs for all. Naturally, there will be few jobs in the private sector which have the comfort and security of government jobs, but in an ecosystem where plenty of decent jobs are available, there is a different sense of comfort and security. At any rate, it is better than being stuck doing low paid jobs in agriculture and the unorganised sector.

This article was first published in Sunday Guardian Live as The real Agni-Path to better jobs on 25 June 2022.