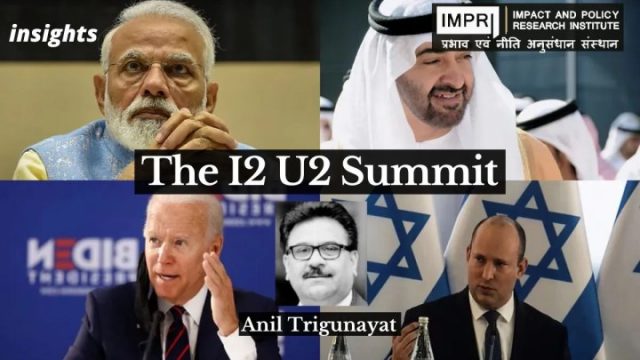 On July 14 , while President Biden was in Israel on the first leg of his much discussed desert Safari ending in Jeddah conferring with the regional leaders to strengthen the Abrahamic security bridges, he virtually hosted a summit of his counterparts from India, Israel, and UAE now referred to as I2U2 .

The much talked about grouping was launched in October 2021 during the consequential visit of Indian External Affairs Minister Dr S Jaishankar to Israel. This was referred to by the Israelis as the International Forum for Economic Cooperation and by more sanguine ones as the West Asian QUAD drawing an analogy from the other QUAD of the Indo-Pacific. Sherpa level meetings from the member countries kept working on identifying the practical areas of cooperation while accounting for the regional and global challenges. Since then, the unexpected happened in the form of ongoing Russia-Ukraine War.

Like in the QUAD one had quick Summit level meetings since Biden came to occupy White House, this I2U2 Summit lends a greater sense of purpose and opportunity by harnessing synergies, economies, technologies and markets in the ever so dramatically changing equations in the region and unforeseen challenges and crises of food and energy as a result of the Russia-Ukraine War spanning along the debilitating impact of the Covid pandemic. The idea and effort is also to extend and capitalize on mutual strengths through the region encompassing South Asia, West Asia and North America .

Prime Minister Narendra Modi called the I2U2 summit as positive, progressive, and practical which can become a cooperation and welfare model for others too. As for India it is a natural extension of its already closer partnerships with the other three countries. UAE and Israel are India’s strategic partners with Abu Dhabi being her 3rd largest trading partner and a major opportunity multiplier in the region while Israel is a trusted technology partner.

Despite New Delhi’s principled strategic autonomy stance, the USA remains her Comprehensive Global Strategic partner and the topmost trading, investment and technology cohort. India also does not find this group to be involved in China containment objectives as nearly all four (despite Sino-US power competition) have significant dealing with Beijing across the spectrum and hoping for its changed behaviour in so far as aggression and transgression are concerned.

USA understands and appreciates even if it does not agree with India’s position. Jake Sullivan the US NSA recently reiterated that ‘India also has very longstanding ties with Middle East and relationships not just with the Gulf countries but a relationship over the years with Israel. So as the US can play a critical and central role in helping deepen Israel’s integration into the region, India has a role to play in that as well’.

The I2U2 grouping seeks to encourage joint investments in six mutually identified areas like water, energy, transportation, space, health and food security. P2P partnerships will help modernize the infrastructure with low carbon footprint with the adaptation of green technologies. Given the pandemic challenges and stark realities on the ground it seeks to address challenges in public health and harnessing of green, emerging and critical technologies through joint efforts.

Of the six areas food and energy security have acquired a new regional and global challenge with the ongoing Eurasian war and weaponization of financial instruments, food and energy that has sent the price sky rocketing and availability of food and energy downwards in the region and elsewhere which is evident through disquiet and demonstrations all over. Indian Foreign Secretary Vinay Kwatra at a briefing averred the I2U2 I2U2 mandate to “improve public health and access to vaccines, advance physical connectivity between the countries in the Middle East region, jointly create new solutions for waste treatment, explore joint financing opportunities, connect our start-ups to I2U2 investments and also look at opportunities in the space of FinTech.”

While the Gulf countries in the region may tide over with comparative ease given their petro dollars other countries in the region may not be that lucky with their street. India plays a major role in their food security while it is the 2nd largest buyer of their oil and gas and fertilizers. India has also recently signed the Comprehensive Economic Partnership Agreement (CEPA) with UAE while similar agreement is likely to be concluded with Israel in near future which had also signed a Comprehensive Free Trade Agreement with UAE.

New Delhi is also hoping to have some sort of a trade deal with US. These institutional arrangements will create a sustainable inter-regional framework for trade, investment, services and technology. Hence India needs to play on the front foot which is needed to encash mutually advantageous opportunities in an exponential manner.

While Saudi Arabia has committed to invest over $ 100 bn in Indian opportunity and the UAE another $75 bn with Qatar, Oman and Kuwait following suit, during the I2U2 Summit indicating the primacy of the problem, UAE announced an investment of US$2bn in the food processing sector.

The first project relates to the food corridor. Under this project, the UAE intends to invest roughly US$ 2 billion to develop a series of Integrated Food corridors across India, which would deploy climate smart technologies to reduce food wastage and spoilage, conserve fresh water at the same time, and also employ renewable energy sources. In this endeavour, the US and Israeli private sectors would lend their expertise as partners in this project, and would also look at offering innovative solutions that contribute to the overall sustainability of the project. India welcomed the project and will provide appropriate facilitation towards its successful operation.

The project has four key connects to the people on the ground. One of them of course, is maximization of the crop yields, two, enhancement of Indian farmers’ incomes, three, contributing overall to the food security in South Asia, and in this case, as an extension also in the Middle East, Kwatra added. India also expressed its intention to join the Agriculture Innovative Mission for Climate Initiative (AIM).

Likewise, the Joint statement refers to a proposed hybrid renewable project in Dwarka, Gujarat, consisting of 300 MW of wind and solar capacity complemented by a battery energy storage system. The US Trade and Development Agency (USTDA) has already funded a feasibility study for this project, which is roughly the quantum of US$ 330 million.

UAE based companies are exploring opportunities to serve as knowledge and investment partners on the project. Israel and the US intend to work with the UAE and India to highlight private sector participation. For the US it is a reiteration of its continued engagement in the region where it is seeking reenergise and revitalize its partnerships and alliances and for others another opportunity to closely integrate and work together in the sub regional, regional and continental frameworks through quadrilateral and trilateral formats especially in Africa .

Hence, one could see some significant way forward with concrete outcomes but as there is a spate of Free Trade Agreements and several new groupings like the RCEP(China led Regional Comprehensive Economic Partnership), US led Indo Pacific Economic Framework , Blue Pacific enterprise, BRICS, QUAD etc. one would have to see how these criss-crossing groupings will eventually perform. Meanwhile, as the leaders affirmed that these are only the first steps in a long-term strategic partnership to promote initiatives and investments that improve the movement of people and goods across hemispheres and increase sustainability and resilience through collaborative science and technology partnerships. Will I2U2 lead to ‘Me too’ in the region remains to be seen.

This article was first published in Vivekananda International Foundation as The I2U2: A Matrix of Some Consequence on 18 July 2022.