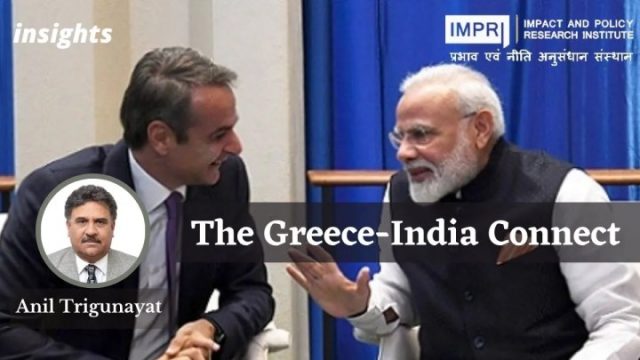 India is the flavour this month. A spate of high-level important visits like the 14th India-Japan Summit, US-Australia Virtual Summit, Austrian Minister for International and European Affairs UK Foreign Secretary Liz Truss and the US delegation led by Victoria Nuland (of Georgia and Ukraine fame) to try and wean away New Delhi from its current position at the international fora and the UNSC on the Russia-Ukraine crisis. In the least, they sure would seek if India can impress upon Putin to deescalate.

A possible visit of Chinese Foreign Minister Wang Yi to try and reset bilateral ties is reportedly on the cards. However, strategically important, even if less publicized, is the Indian quest for an Aegean and Mediterranean connection.

Greek Foreign Minister is slated to come on a return visit to New Delhi this week. Earlier in June last year, External Affairs Minister S Jaishankar had visited Athens on one of the first in recent times. All these visits will have one point of discussion for sure and that is India’s position on the Russia-Ukraine crisis. Japan, Australia, UK and Greece are in the same opposing and Russia bashing flock. China and India have their own nuanced position that is also being formulated within the context of a well-cultivated relationship within BRICS, SCO and RIC trilateral where Russia is a driver.

Since India has a much trusted and special and privileged strategic partnership with Russia hence India’s stand on the Ukraine crisis somehow is being perceived not in the context of India’s principled position, by the West. At the recent QUAD virtual summit PM, Narendra Modi had explained the position with much greater conviction to his counterparts. For India, the QUAD context remains relevant. India and Greece have a historic and civilizational connection going back to over 2500 years not only connected with Alexander the Great’s expedition in 326BC.

Chanakya, in Chandragupta’s Court records in Arthashastra about Yavan Ambassador in the Kings’ court, named Megasthenes. Gandhara art is believed to be a fusion of Indian and Greek influences. Both sides share similar views on regional and global issues of mutual interest in the context of new geopolitical and geo-economic realities, including the Indo-Pacific. The convergence of each other’s vision for a free, open, inclusive and cooperative Indo-Pacific ensuring connectivity and growth for all in the region also provides a new drive to the bilateral relations in a regional context.

During the visit of Dr Jaishankar, Greece joined the International Solar Alliance (ISA) family which is an Indian initiative to realize the energy goals set by the respective governments to make renewable energy a significant part of the energy supply as we fight climate change together. We have had significant high-level visits and the relationship has been expanded to include strategic elements including defence cooperation as the global order undergoes a change and new equations and challenges are emerging including in the Mediterranean.

Athens and New Delhi are mindful of one another’s security and core concerns. Greece supported India at the NSG, WASSENAAR, MTCR arrangements as well as supported various UN candidatures and at the Australia Group. India also supports Greece on the Cyprus issue. Although Greek and Turkish Defence Ministers met at the NATO Defence Ministers Meeting in Brussels last week to try to work out a positive way forward Athens realizes that India can be a good and reliable partner as their mutual strategic interests coincide.

Hence a continuous exchange of high-level visits becomes an instrument of driving up the collaborative matrix. The last one among many was the visit of the Indian President in 2018. Trade and investment are an important dimension and despite the pandemic bilateral trade has continued to grow and even doubled crossing $1 billion in the last nine months.

Make in India and Atmanirbhar Bharat also are of great interest to Greek investors and India Participated as ‘Honoured Country’ in the 84th Thessaloniki International Fair (TIF), the largest annual commercial exposition of Greece, and also the largest in Southeast Europe and the Balkans from September 7-15, 2019. High powered Indian business delegation was led by then Minister of State for Commerce Hardeep Singh Puri.

The “New India” Pavilion was inaugurated by the Prime Minister of the Hellenic Republic, Mr Kyriakos Mitsotakis who made a public statement that invitation to India to participate as “Honored Country” was not by chance, but it represented Greece’s conscious policy decision to forge a robust economic, trade, and investment partnership with an economic power like India. The 8th meeting of the Joint Commission (JEC) is slated in April which will address all the key issues relating to trade, investment, tourism, and aviation.

Fortunately, over time the two countries have created institutional mechanisms and agreements that facilitate bilateral trade and investment. Although the Indian Chief of Army Staff (COAS) was also expected to visit Greece, due to the COVID-19 pandemic they held a virtual meet. Greece has had a tough time within the EU and had to be bailed out. At one time one could hear of GREXIT like the BREXIT. But it has picked up steam and despite the pandemic, it is doing very well turning around the economy.

Major MNCs have begun to reinvest. New opportunities for strategic purposes are also being flagged. Ports in the north and south are being developed as energy hubs and for regional trade and transportation links. It is an opportune time for us to strengthen our relations with Greece at this juncture for mutual benefit. There are proposals even to create a twinning partnership between Indian and Greek ports.

A successful venture is between GMR Airports Ltd. and its joint venture partner, GEK-Terna, a leading Greek infrastructure company, who were awarded a contract, for an €850 million construction project of a new airport at Kasteli in Crete Island that marks the first-ever entry of a major Indian company in Greece in recent years. Many more are in the pipeline.

Greek Prime Minister calls India a world power and wants a more vigorous partnership with it. Surely the visit of the Greek Foreign Minister Nikos Dendias and his interactions in India will propel the newer opportunities both in the strategic bilateral and EU-wide context with which India is negotiating a separate Free Trade Agreement.

First published on CNBC titled as View: The Greek Connect, on 22 March 2022

Read more on the Russia-Ukraine conflict by Anil Trigunyat, Fall out of Russia Ukraine War- An Alternative Financial Architecture waiting in the Pipeline, in IMPRI Insights