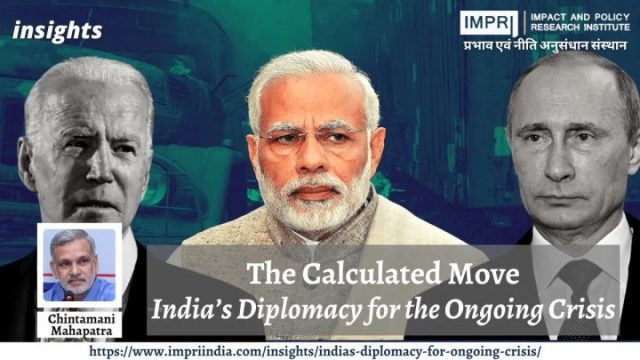 The international community has been intensely scrutinising India’s response to the Russian invasion of Ukraine. The United States has desired India to play a constructive role by influencing President Vladimir Putin to put an end to his military intervention in Ukraine. President Volodymyr Zelensky of Ukraine has urged India to help restore normalcy by engaging in talks with Putin. While Russia has asked nothing of India, it has showered praise on India for its balanced role in view of its abstention from the UN Security Council Resolutions: One condemning the Russian military action, and the other calling for an emergency meeting of the UN General Assembly to discuss the Ukrainian crisis.

Interestingly, China and Pakistan appear to be on the same page with India on the Ukrainian issue. China, like India, abstained from the UN Security Council Resolutions sponsored by the Western powers. And Pakistani Prime Minister Imran Khan landed in Moscow for a bilateral meeting with President Putin on the day the Russian invasion took place and was not in a position to criticise Moscow. Even after his return to Islamabad, Imran Khan has not drastically altered his view.

On the surface, it appears that the three nuclear weapon powers of Asia are sympathetic towards the Russian action against Ukraine. China has been at odds with the United States for the last several years and accuses Washington of following containment of China policy. It has also developed closer strategic, trade and energy ties with Russia and seeks a coordinated approach with Moscow to resist unilateral US policies in the current global order.

Pakistan’s recent efforts have been to build closer ties with Russia to counterbalance the Indo-Russian strategic partnership and to seek Moscow’s cooperation in Afghan affairs post-US troops withdrawal from Afghanistan. By seeking closer relations with Russia, Islamabad aims to moderate consistent Moscow’s backing to India on Kashmir and other issues in South Asia.

India, on the other hand, has had deeper strategic relations with Russia for decades. While the origins of it go back to the Cold War days, India has continued to maintain defence and security ties with Russia even after the collapse of the Soviet Union. The United States always objected to India’s closer security relations with the former Soviet Union during the Cold War, but never expressed concern about Indo-Russian security ties until very recently. Washington actually ticked off Russia as a security threat for decades after the end of the Cold War.

The changed American threat perception of Russia has been the result of the Russian policy of expansionism, as reflected in its intervention in Georgia in 2008, the annexation of Crimea in 2014 and even its assertive role in Syrian affairs. The enactment of CAATSA or Countering America’s Adversaries through Sanctions Act is the consequence of the changing American perception of Russia and its role in international affairs. CAATSA has been hanging over India as a Sword of Damocles for purchasing S-400 missiles from Russia.

Nonetheless, India, Pakistan and China have their own strategic calculations and there has never been a synchronised response to developments in Ukraine. The Western countries have little to feel good about China’s abstention from UN Resolutions and in any case, have not much leverage to influence Chinese behaviour. Moreover, the Sino-Russian strategic partnership to counter the US and its allies is too well known. Pakistan’s policy, on the other hand, draws no attention in Western capitals. Islamabad would do what Beijing says or does in such cases.

Significantly, the world is carefully watching India’s approach to the Ukrainian issue. First of all, this is the result of India’s emergence as a credible player in global affairs. Second, India’s deft diplomacy has succeeded in cultivating a deep and wide strategic partnership with the United States despite New Delhi’s friendship and cooperation with countries, such as Russia and Iran. Third, the US perhaps expects India to use its diplomatic skill to resolve the Ukrainian issue in view of Prime Minister Narendra Modi’s personality and friendly bond with President Vladimir Putin. In fact, there are not many world leaders whom US President Joe Biden can look up to for such a role.

There is no doubt that the Ukrainian crisis has put India’s diplomacy under intense scrutiny. But there is another side to India’s dilemma and difficulties. The United States and its allies have put India on the test to ascertain whether India will be on board to maintain and manage the current global order along with them. Is India trying to just balance its ties with the US and Russia? Is India trying to distance itself from taking a clear and concrete position on Russian military intervention in Ukraine? Is India just trying to walk a diplomatic tightrope?

In reality, India is trying to do nothing of the above. India does not have a treaty alliance with the United States to commit itself to a united position. Nor is India an alliance partner of Russia. There is no declared Cold War between the power blocs either. Traditionally, India is opposed to the formation of military blocs. It is also opposed to the violation of the territorial integrity of any country by another country. India has maintained good and cooperative relations with the US, Russia, Ukraine and the EU member countries.

In such a complex development as the Ukrainian one, what India is doing is carrying out its responsibility to protect its national interests, such as ensuring the safety and security of its nationals in Ukraine, safeguarding its cordial ties with Washington, Moscow, Kiev, and other European capitals. The best way to do so would be to refrain from taking sides, urge the parties to the conflict to resort to dialogue and diplomacy and peacefully resolve the crisis.

To do that, India has supported the Russo-Ukrainian initiative to hold unconditional dialogue, expressed its opposition to violence and loss of human lives, sent humanitarian assistance to Ukraine, has not condemned the Russian military action but has called for an immediate end of hostilities. It has gone along with the Western sanctions, as reflected in the decision of the State Bank of India to refrain from handling trade with Russian entities that are under Western sanctions; and announcement by Indian oil corporation not to accept cargoes of Russian crude oil and Kazakh CPC Blend cargoes on a free-on-board basis. Of course, these steps are taken not to take sides, but to protect India’s vital economic interests. One of the top priorities of the Government of India has been to bring back safely thousands of Indians, most of the students, from Ukraine.

India has appropriately followed an autonomous path in its diplomatic response to the Ukraine issue. But could India have done more? A global player needs to do more than just protect its national interests. It has to offer more for maintenance of order, peace and stability in world affairs. Could India have opposed the expansion of Russian military activities beyond the two provinces in Donbas? Could India have asked for a halt to further NATO expansion? Could India have demanded the imposition of Western sanctions on Russia in ways that would not hurt the economies of developing countries?

First published in the Firstpost, Why is India’s approach to the Ukraine crisis under spotlight?, on March 4, 2022.

Watch Chintamani Mahapatra at IMPRI #WebPolicyTalk delivering a special lecture on From Asia-Pacific to Indo-Pacific: Issues and Challenges.