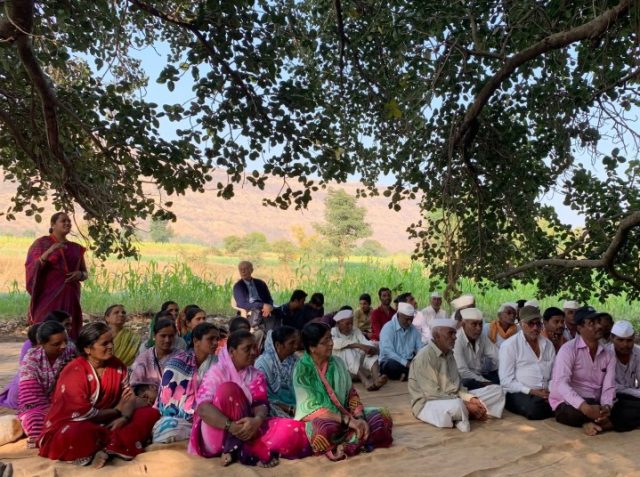 The debate over environmental degradation has acquired substantial traction in recent years. Governments, civil communities and international organisations are all working to mitigate the environmental costs of economic expansion and growth. These reforms have also brought to light the concept of environmental governance in emerging towns, which refers to political changes aimed at influencing environmental activities and outcomes. It is under this backdrop that the #IMPRI Centre for Habitat, Urban and Regional Studies (CHURS), IMPRI Impact and Policy Research Institute, New Delhi hosted a talk on Small Cities and Environmental Governance in Gujarat and West Bengal: Need for External Intervention or Capacity Building? as a part of #WebPolicyTalk series- The State of Cities – #CityConversations on January 28, 2022.

The talk was chaired by Dr Soumyadip Chattopadhyay, an Associate Professor, Visva-Bharati, Santiniketan and a Visiting Senior Fellow, IMPRI, New Delhi. The speaker for the event was Prof René Véron, a Professor at the University of Lausanne, Switzerland. Other discussants in the panel were Prof Gopa Samantha, Professor of Geography at the University of Burdwan, West Bengal, Dr Sally Cawood, Global Challenges Fellow, Department of Urban Studies and Planning (USP), University of Sheffield, England, Sameer Unhale, Joint Commissioner – Department of Municipal Administration, Government of Maharashtra.

Dr Soumyadip commenced the session by stressing the excessive talks and debates that we have been surrounded in the recent past concerning environmental degradation. Very little research has been carried out on the socio-political and economic dynamics of the smaller cities, and the development of these smaller cities is very important in ensuring sustainable urbanization in India. Many problems such as weak finances, poor governance, and deficit infrastructure are more severe in the small cities of India. Dr Soumyadip highlighted the various issues to be discussed further in the discussion such as a participatory framework for environmental governance in small cities, infrastructural arrangements etc.

Prof Rene Veron made a brief talk on “Need for External Intervention or Capacity Building?” for small city environmental governance in West Bengal and Gujarat. The talk was organised on the four F’s of decentralised urban governance in India:

Prof Veron stated in his presentation that urban decentralisation in India is inadequate and ineffective. Prof Veron gave his thoughts on the four F’s described above based on his examination of the literature. In addition, he provided a nuanced image of decentralised urban and environmental governance in four ULBs – Bardahman Municipality, Medinipur Municipality in West Bengal, and Navsari Municipality and Amreli Municipality in Gujarat. The population in these municipalities ranges from one to four lacs, with growth rates ranging from 9.7 to 17.0 per cent. He also discusses the urban planning process in these states and compares the performance of municipalities based on numerous characteristics and indicators such as the number of parastatal agencies, municipal workforce, technical and managerial expertise, and so on. He also shared various projects undertaken, and the approach considered by the municipalities. Finally, coming end to the presentation he gave his concluding remarks.

Prof Veron was followed by Prof. Gopa Samantha, who spoke about environmental governance in West Bengal, Jharkhand and Bihar. She discussed the changes she noticed in the government, public participation and other areas in West Bengal. Previously, in the Kolkata Municipal Corporation, Ward meetings were held by the corporation and ward committees, where citizens engaged and gathered to find a common solution to a problem with the involvement of authorities. However, since the change of government a couple of years ago, no such meetings have taken place in any municipalities. Prof Gopa Samantha also discussed municipal taxes, water taxes, and the Chandernagore Municipal Corporation. She discussed the politics that exist between the state government and the ULBs, which can either strengthen or undermine the ULBs in terms of financial sustainability, governance and infrastructure development. She highlighted the issue with ongoing centrally financed initiatives such as Atal Mission for Rejuvenation and Urban Transformation (AMRUT) and Jawaharlal Nehru National Urban Renewal Mission (JNNURM), as well as state government tied funds, which are another issue for ULBs.

Dr Sally has spent the last ten years working in the fields of urban poverty, water and sanitation in Bangladesh, as well as Tamil Nadu, Karnataka and New Delhi in India. Dr Sally emphasized the financing deficits for ULBs in communities ranging from rural villages to major cities. She also discussed decentralization, participation, and the privatization of municipal governments and infrastructure. There are various issues and challenges in urban management in terms of urban infrastructure for Solid Waste Management, water supply and sanitation which Dr Sally researched and discussed.

Sameer Unhale offered his considerable administrative experience by discussing the history of municipalities in the Indian constitution from 1815 to the present. Following the 74th CAA, environmental protection became an obligatory function of ULBs in India under the 12th schedule. In Maharashtra, it is a statutory function of ULBs to produce an annual Environmental Status report, which is one step toward environmental consciousness. He also discussed the Environmental Protection Act (1986), which aided in the containment and control of pollution at all levels, as well as other legislative acts and sections of the Indian Constitution. Further, he added to the conversation, how the Swachh Bharat Mission (SBM) focused on people’s participation. The setting up of Biodiversity committees in Class A towns of Maharashtra where ULBs maintain a record of various flora and fauna found within their municipal limits along with other responsibilities can be a big step that can be replicated in small towns.

Dr Soumyadip further asked the speaker Prof Veron and Dr Sally to respond to the various queries and observations raised during the discussion. Both the speaker and the discussants presented some interesting perspectives, insights, and opinions on a variety of topics, as well as expressed some significant concerns.

India must strike a balance and prioritize its initiatives. Governments should also take a more holistic approach to policymaking and not consider the environment in isolation. Furthermore, we should start thinking about the future of small cities along with their climate action plan because everyone is affected by the environment, but we are not questioning all of the actors that are contributing to the devastation. As a result, greater education and policies are required.

Acknowledgement: Utkarsh Dwivedi is a research intern at IMPRI.

Youtube Video for Small Cities and Environmental Governance in Gujarat and West Bengal: Need for External Intervention or Capacity Building? on IMPRI #WebPolicyTalk