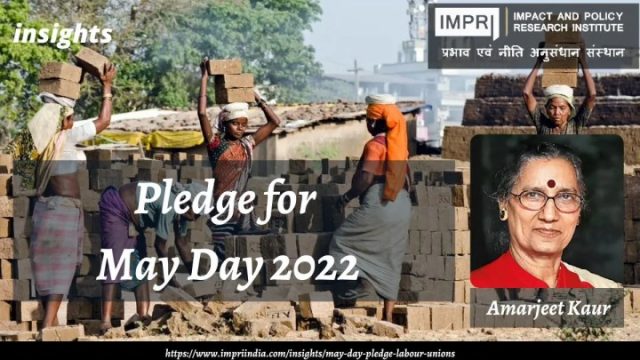 May Day reminds us of the history of the great sacrifices of the workers throughout the world in bringing to focus the extreme exploitation of the working class, that they were treated like animals, with no fixed working hours, no justified return of their hard labour, no occupational safety at workplaces and nothing for social security.

The struggle behind May Day

The day reminds us of the great struggle for the dignity of labour, and that the workers’ rights are human rights. In a way, the discourse of human rights is set in human history by the labour movement. This naturally gave the working class the role of leading the aspirations of downtrodden, vulnerable sections, the have-nots of the society.

Beginning from the second half of the 19th century the workers started asserting in the various parts of the world for fixed working hours. In India, this voice was first time raised in 1866 twenty years before the famous Chicago workers’ strike action which led to severe oppression of workers arrest of their eight top trade union leaders, four of them hanged to death, one died during trial and three were given sentences for life imprisonment. The message of that agitation spread across the world was immense and the trade union movement grew at a fast pace facing all odds.

In India, the first strike of Indian workers to draw attention to their exploitative conditions during British rule is registered in history in 1827.

Here it would be appropriate to mention that it was the struggle of workers to fight back against exploitation by the ruling classes and the imperialist power, the resistance of the tribals of India who were being thrown out of jungles by the rulers to exploit the resources of forests, the struggles of farmers against grab of their lands under various draconian laws being framed by the British masters, all that set the environment for political opposition to the foreign rule on our motherland.

The uprisings in 1857, termed as the first war of independence had these factors as the most significant in the background. There was extreme oppression to suppress the resistance.

This is worth mentioning here that within four years of this tyranny by the colonial masters, the working class started reassertion and we find in historical records the strike agitations having again begun from 1861 from Kolkata and then spreading to other industrial areas in the country.

Five years onward from there in 1866, the voice for fixed working hours was raised. Till then the unionization had not yet begun in the proper sense of the word. It was more of some welfare measures being suggested by some of the leaders who were organising labour, sometimes on community bases from outside for getting some relief for them. It was from the 1870s onwards that sector-based unions were begun to be organised.

The trade unions set the examples of a mass movement for the freedom movement of our country. From the beginning of the 20th century, the battle lines were sharper for fixed hours, wages, workplace safety and compensation and for social security. Hundreds of strikes are registered during the period before the foundation of AITUC on 31st October 1920.

May Day observations in India began after that only, with AITUC unions in some areas of present-day Tamil Nadu being the first and then this was spread steadily all over India.

The working class got legal status with the promulgation of the Trade Union Act 1926 after a long battle, right to compensation and maintenance through an Act in 1923, changes in Factory Act was brought about with workers actions several times.

The historic action of throwing leaflets in the National Assembly (present-day Parliament House) by the revolutionaries- Bhagat Singh and Batukeshwar Dutt in opposition to three laws including the Trade Disputes Act which the unions had called draconian. The Industrial code by Modi Govt. reminds of that today. The Payment of Wages Act was achieved in 1938.

The labour movement determinedly fought for its rights as well as participated in the freedom movement to strive to lead it to a successful conclusion in the period pre-formation of its first national centre named AITUC in 1920, on spontaneity on the call of the freedom platform and after AITUC founded, then as an organised movement under the banner of AITUC.

The second session of AITUC in Jharia had adopted a resolution demanding complete independence and to strive for that it determinedly pursued with the political leadership of the freedom movement. It not only demanded a constituent assembly rejecting the self-rule formula presented by the colonial rulers but also submitted a charter of demands seeking inclusion in the Constitution being prepared.

Post-independence the working class played its role in nation-building with the public sector achieving the desired role of its time.

Simultaneously on every step, it had to struggle on the streets for achieving its rights through various legislations in Parliament and State legislation with the support of the communists and other labour friendly legislatures.

There was continuous opposition to the workers’ demands from the reactionaries in the British Era as well as post-independence of the country. The forces opposed to labour rights were also opposed to the self-reliant economic path for India and they tried to create obstacles at every step. History is witness to it.

Where do we stand today when the forces which were the antithesis to self-reliant economic development and believed in the free-market economy as practised by the western Capitalist powers, especially the USA are at the helms of affairs in the Govt. at the Centre led by Mr Narendra Modi who is day and night busy working to the advantage of a coterie even within the Corporate sector and of course to the advantage of international finance capital. The results are there for all to see.

The economy is in shambles, inflation highest in the last decade recently recorded at more than 12 points, unemployment rate rising with every passing day, presently at about 12 per cent leading to frustration for the youth of the country, the women labour force participation gone down from about 30 per cent in 2006 to 15 per cent in the beginning of 2022, the job loss continues with many establishments closing down, technology also taking away jobs, the
jobs absorption after the opening of lockdown is on conditions of cutting down on wages and related benefits etc.

To contain the resistance from the working class under their organised unions, the agenda of labour codification and labour law reforms is pursued aggressively to stifle the voices of opposition from the working masses. It is known that the three labour Codes were passed in the Parliament without discussions when the whole opposition was on walkout and without the laid procedures of the Indian labour conference for that.

The opposition to govt. policies are dubbed as anti-national act and people are harassed by various agencies at its command. The Sedition law, UAPA, CBI, ED, NIA, NSA etc are extensively used to book the cases and put the opponents behind the bars to languish in jails for long.

On the other side, the RSS BJP led regimes in the centre and the states through its various outfits and vigilante groups while getting all the protection from the power hierarchy, pursued an agenda of religious polarization under various slogans and actions around that, like Ghar wapasi, Gau Raksha, Love jihad, CAA, now hijab ban etc.

Mr Modi did not condemn the open calls of the genocide of Muslims in Dharam Sansad in Uttrakhand, or in the later gatherings by the very same people. Not only that some BJP Legislatures including ministers in the Centre and states have been giving provocative communal statements in violation of rule of law and the constitution, but the Prime Minister is keeping silent as if nodding to their actions.

The riots are being conspired and engineered and then bulldozer politics is being made new normal with the target on poor basties. The daily earners and informal economy workers are the targets. The organised vigilante groups from outside are brought to disturb the peacefully living people of various faith and belief.

In a planned manner agenda was set and a campaign was conducted accordingly by the trio PM, CM of UP and the Home minister to win the UP election by any means vitiating the atmosphere everywhere and using the major media which is in their control. Kashmir files are released and endorsement from PM himself set the ball rolling for tax-free to make the people watch the film furthering the poisonous division brought as a strategy to win the next set of state elections and then continue venom with an eye on 2024.

The working class has a tremendous task before it in these challenging times. To continue building the broadest possible unity for the national cause to safeguard our natural resources and national assets, to defend our labour rights, to save the harmonious living of our people, to reject the agenda of hatred.

This “May day” in this background imposes great responsibilities to be shouldered by the unionists. No time to rest. March has to go on until the tyrants are tamed and defeated through the desire and actions of the masses.

This article was first published in Arabian Post as May 1 This Year Has Special Significance For Indian Working Class.

YouTube Video for The Future of Labour Codes: Impact and Way Forward from Trade Union Perspectives