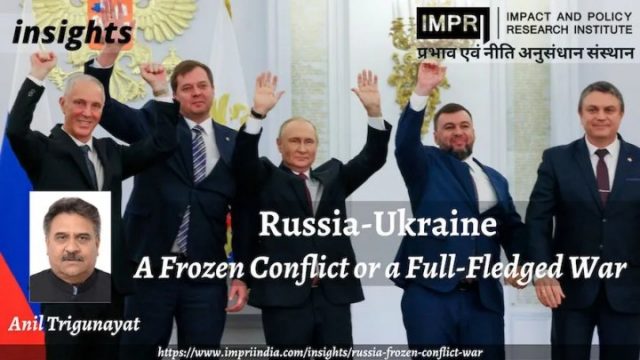 This annexation, unlike Crimea in 2014, was essentially targeted for the domestic audience to showcase the achievements and nefarious designs of the US as reports of Russians dodging and fleeing the country against the fear of mobilisation since they did not consider it their war.

On September 30, Russia scripted another leaf in the history of international law by annexing four Ukrainian regions of Donetsk, Luhansk, Zaporizhia and Kherson pursuant to a referendum held between September 27 and September 30 even as it did not control the complete territories. Russia is the biggest country in the world and Ukraine the second largest in Europe hence mere annexation of 15 percent of Ukraine made no sense.

Moscow had earlier recognised Donetsk and Luhansk as autonomous Republics and sent forces to protect them pursuant to the February so-called ‘Special Military Operations”. While President Putin, in an impressive ceremony at the Kremlin with the appointed Administrators of the aforementioned four regions, proclaimed that “People have made their choice’ further adding that those citizens and regions of Russia will be protected with every means at his disposal which was construed as the pretext to use even the nuclear weapons or so-called tactical weapons to deter the already deteriorating situation on the borders.

Russian forces reportedly faced some reverses and losses of territory which led Putin to call for partial mobilisation of the reserves so that the acquired territories and borders could be watched and kept from the emboldened Ukrainian forces. How that will play out remains to be seen.

Meanwhile, President Zelensky of Ukraine, while wanting even more lethal armaments and weapons is pushing for an expeditious membership of NATO.

The war had begun mainly due to this very demand of Putin to Biden securing guarantees that NATO borders will not be further expanded eastwards. But that is what seems to be the case. Acquisition of these four regions has brought the borders in direct conflict zone and the hope of having a buffer in between is over as chances of further escalation increase.

Knowing that NATO entry was unlikely, two months into the war, Zelensky had even agreed to drop his demand in Turkey-mediated talks but the west/US prodded him to go till Russia is defeated. A prolonged war has achieved at least one objective of increased European dependency on the USA and a closer Transatlantic Alliance. For how long is the question since Putin is counting on the economic and energy-induced difficulties and forbidding costs the ordinary European will face during the upcoming winters and the popular dissatisfaction might force those governments to view the problem from a local lens than the US’s geoeconomic prism.

This annexation, unlike Crimea in 2014, was essentially targeted for the domestic audience to showcase the achievements and nefarious designs of the US as reports of Russians dodging and fleeing the country against the fear of mobilisation since they did not consider it their war. In his speech, Putin was voluminous in his denigration of the US and the West which are trying to do everything so that the neo-colonial system is preserved with Russia becoming a colony of their slaves which he will never allow. Promises by them not to expand NATO further East turned into dirty deception, he added.

Russophobia and neo-liberal culture is said to be pervading their mindset. These are some of the justifications advanced for further military action with all means possible, while Putin asked the Kyiv regime to immediately ceasefire and return to negotiating table. Russia is ready for talks. Zelensky obviously is in a fix and does not want to deal with Putin whom he called the choicest names.

The Western response was more of the same condemning and rejecting the annexation as illegal while placing more sanctions on the already most sanctioned country in the world. It is part and preparation of Putin’s plan. For Putin, this will be his last-ditch effort to regain some sort of victory or face-saving for which further escalation could be a given.

Even Serbia and Kazakhstan, two of the close friends of Russia, refused to support the annexation for their own domestic reasons. The USA by default has gained some more foothold in Central Asia which is already the butt of Eurasian and Chinese competition. UN Secretary-General Antonio Guterres lamented “any decision to proceed would have no legal value and deserves to be condemned. It cannot be reconciled with the international legal framework” as Russia justified it as self-determination in accordance with the UN Charter. Whatever its strategic justification to annex these areas, Moscow‘s narrative will remain wanting in the international discourse.

UNSC meeting and the US-sponsored resolution against the Russian action proceeded as expected once again exposing the limitations of the UNSC and UN in general. Russia vetoed the resolution calling the annexation illegal and a threat to international peace and security demanding unconditional reversal. While 10 countries supported the UNSCR China, Brazil, India and Gabon abstained essentially to reduce the chances of a furthermore dangerous escalation.

India, in keeping with the totality of the situation and its clear and consistent policy of promoting peace and dialogue and urgent cessation of hostilities and securing her national interests, said that “The global order is anchored on the principles of the UN Charter, international law and respect for sovereignty and territorial integrity of all states. Escalation of rhetoric or tension is in no one’s interest urging that It is important that pathways are found for a return to the negotiating table“.

In Samarkand, PM Modi had been openly categorical in his meeting with President Putin that “the Era of War is over” and democracy, diplomacy and dialogue were the only way forward. Any further escalation of this war, which is directly impinging on all the countries including emerging economies like India whose predicament may not last forever, will demand a more proactive approach to stop the conflagration before it is too late. The Mexican leadership has in fact reiterated the formation of a group with the Pope, PM Modi and UNSG to take the peace initiative.

As the things stand, the situation will worsen before it osmoses into either a frozen conflict or a full-fledged war. Hope the worst fears don’t come true.

This article was first published in CNBC TV 18 as The challenges of the Russian annexation October 2, 2022.