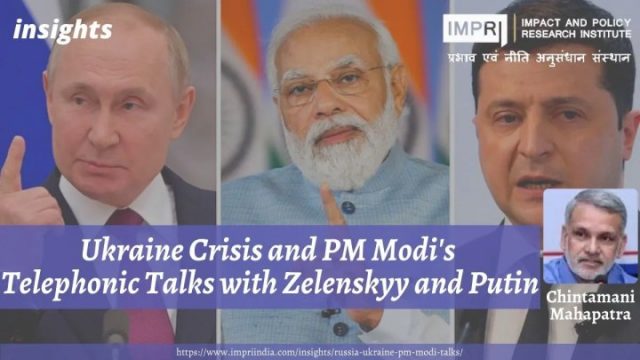 The entire world seems to be concerned over the ongoing warfare in Ukraine. Some regions would bear the brunt of the war from closer proximity than others. Some countries appear to be more anxious than others over the consequences of the war in Ukraine.

India is relatively far from Ukraine in terms of its geography but is evidently more anxious over the impact of this war on India per se than many other countries. The reason is not difficult to fathom. And this is flawlessly revealed in Prime Minister Narendra Modi’s conversations with the leaders of Russia, Ukraine, France, Poland; fellow heads of government of Quad, and the President of the European Council.

In all these conversations, Prime Minister Modi has given precedence to the safety and security of above 20,000 Indian citizens, most of them young students, who have been badly trapped in the current violence in Ukraine. As Russia’s war machine is unleashed in several cities in Ukraine causing destruction of property and loss of human lives, innocent Indian nationals have been fleeing for their lives.

India has absolutely no role in the events and factors that have led to this war. India has rather sought to maintain cooperative relations with Russia, Ukraine, NATO member countries, and the United States. Yet India has been one of the worst victims of this war.

While the Western world, especially the United States and its European allies seem to be raising eyebrows over India’s voting pattern in the United Nations and the UN Human Rights Commission, they seem quite oblivious of the potential consequences of this war over thousands of stranded Indian citizens in the war zones. Bullets and bombs in Ukraine do not distinguish between foreigners and individuals who are parties to the war. India can still bear the economic cost of this war to a certain extent, but the concern over the threat to the lives of thousands of Indian citizens has rightfully occupied the uppermost part of the Indian prime minister’s brain.

While quite a few foreign policy analysts appear to be surprised over India’s hesitation to condemn the Russian aggression in the UN Security Council and UN General Assembly resolutions, none of them has appreciated that despite the possible adverse consequences Prime Minister Narendra Modi has boldly and repeatedly expressed concern over the violation of international law, disrespect to the principle of state sovereignty and breach of territorial integrity that have resulted from the current war in Ukraine.

It is true that he did not call the Ukrainian and Russian leaders just to impress upon them principles of international law and norms. The telephone call was meant to seek the support of the warring parties for the safer evacuation of stranded Indians in violence-prone cities of Ukraine. However, Modi did emphasize the need to urgently cease violence and resort to diplomatic negotiations to resolve differences.

The United States and some NATO members expect India to be fully on-board in the current crisis and maintain a strategic distance from Russia. The Cold War-time mentality that “either with us or against us” appears to have re-emerged now.

Read another piece on India and the Ukraine Crisis by Chintamani Mahapatra titled The Calculated Move: India’s diplomacy for the Ongoing Crisis in IMPRI Insights

Read another piece on Russia and Geopolitics by Chintamani Mahapatra titled Can Russia become a global geopolitical player again? in IMPRI Insights