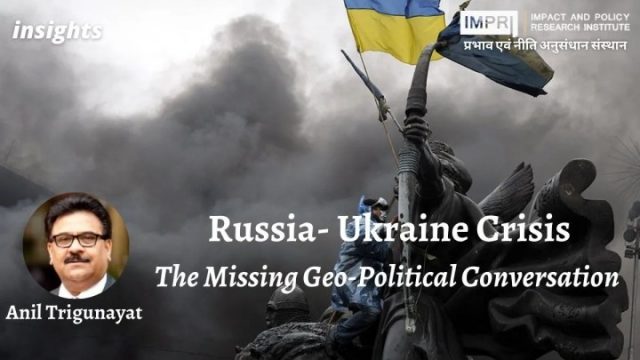 “Will he invade or he won’t” is the perennial question in the minds of Russia—Ukraine crisis watchers as the USA insists and gives timelines for Russian invasion while Putin and his entourage continue to maintain that Moscow is not interested to attack Kyiv if the Minsk Agreements are adhered to and NATO expansion is halted.

But Minsk agreements were rendered invalid as President Putin chose to follow the appeal of his Parliament (Duma) and recognised the two breakaway Republics of Donetsk and Luhansk after informing his German and French counterparts who have been working hard to somehow avert the escalation and arrive at modus vivendi. French President had even worked out a Summit between Putin and Biden but that has been shelved and so is the meeting between Secretary Blinken and Russian Foreign Minister Segei Lavrov on February 24 that was to prepare the contours of stability and indivisible European security for the meeting of their Principals.

West and the UNSC obviously condemned the Russian act of recognition and sending its forces in Ukraine arguably as ‘peace keepers’ that was exactly on the same lines as in 2008 after the Georgia war when South Ossetia and Abkhazia was recognised by Russia as independent entities. New definitions for the UN lexicon are being created. R2P (Ready to Pounce) and regime change have been the agenda of all major powers with a mastery of America and its European partners. Unilateralism appears to be the preferred option.

West reacted by putting sanctions on the breakaway republics and on Russian banksincluding denial of access to Russian companies while more are being contemplated. Russia has been used to hardships and the existing sanctions have shaved off nearly 2 percent of its GDP. But when do the superpowers count their pennies when geopolitics is the priority.

Ever since the fall of the Berlin wall and the disintegration of the Soviet Union, Russia has been vainly and naively expecting the halt of the eastward expansion of the NATO and European Unionor the Transatlantic project. It jolly well knew that whatever understandings it had reached with the Americans, or the Europeans will fritter away over time and several countries from Eastern Europe and the Baltics for historical reasons and grievances would be the first to jump the ship as soon as Kremlin’s iron grip is released.

Comrade Gorbachev and his Perestroika and Glasnost provided that opportunity further expanded by a non-comrade Yeltsin. But then Putin happened. Being trained in the art of espionage and allied adventures and having a sharp analytical mind he knew very well that effort to get closer to the USA will only lead to further humiliation unless one was willing to play the second or third or fourth fiddle.

Deep state in the US and Security outfits ‘The Siloviki’ in Russia only understand the language of brute power, one-upmanship and clandestine designs to undermine the other as mutual distrust holds sway. Real politics, geopolitics, geo-economics, pretense of power and its display and quest for secured spheres of influence and alliance patterns are time tested strategic paradigms and tools that dictate the super-power dynamic.

History and culture are what Putin believes connects them to Ukraine apart from it being a security perimeter and a red line. His July 2020 open letter laboriously appeals to the identity and interdependence with Ukraine. Even during his justification to recognise the two republics, he outlined the historical mistakes of Lenin, Stalin and the Communist Party as well as his predecessor and the ongoing designs of the West and NATO as far as Ukraine was concerned.

He said ‘Ukraine is not just a neighbouring country for us but an inalienable part of our history, culture, a spiritual space …but Ukraine has outperformed its western masters by inventing sanctions against its own citizens, companies, television channels, other media outlets and even members of parliament’. He denounced the March 2021 Military Strategy of Kyiv which sets the goal of involving foreign countries in a conflict with our country ‘with the assistance of the international community on favourite terms for Ukraine including foreign military support in the geopolitical confrontation with the Russian Federation’ he quoted.

At the UNSC, Moscow has laid down several conditions and proposals many of which will obviously be difficult to concede but then Russia has been successful in attracting the attention of the western ‘partners’ knowing fully well that consequences of any war would be disastrous for itself, the Ukrainians and the Europeans and the world at large as a new Cold War 2.0, after a short hot war, would follow. Oil prices are already rising. Uninterrupted gas supplies to Europe and much-touted Nord Stream 2 are in danger of disruption. Ukraine‘s sovereignty is in question too.

We might witness greater role of the new non-Nato ally Qatar, to supply gas to Europe, which will be hosting the Gas Exporting Countries’ meet where Russia is a big player. The Iran nuclear deal (JCPOA) is likely to be expedited so that Iran picks up oil and gas supplies to Europe, if the situation further deteriorates in Europe.

Russia gains nothing more by further invasion as it already has control of strategic black seaport of Crimea and two breakaway parts of Eastern Ukraine in Donetsk and Lugansk identifying with Moscow which might provide the buffer to Russia should the situation eventually goes south like the Georgia Play Book. But if the war indeed takes place everyone will be a loser perhaps except for China which has recalibrated its approach towards dialogue and rapprochement at the Munich Security conference enunciated by FM Wang Yi and is supporting dialogue and diplomacy.

Biden suffering from an image deficit via Afghanistan and British PM suffering from Party Gate might not reap the dividend domestically, which they so badly need, due to the unpredictability. Transatlantic unity somewhat stronger still is at stake as Europeans look to their own interests. New Delhi is walking a fine line hoping the dialogue and diplomacy will find some solution sooner than later where it may not be forced to make a choice between its Privileged and Strategic partner Russia and Comprehensive Global Partner the US of A.

First Published in CNBC as View: The Ukraine Fiasco and Georgian Play Book on February 23, 2022

Also Read by the Author on IMPRI Insights

The Algerian Connect – India upgrades its relationship with the African nation, published on September 24, 2021.

UAE and Israel’s Increasing partnership; Consequences for India and the wider region, published on February 7, 2022.