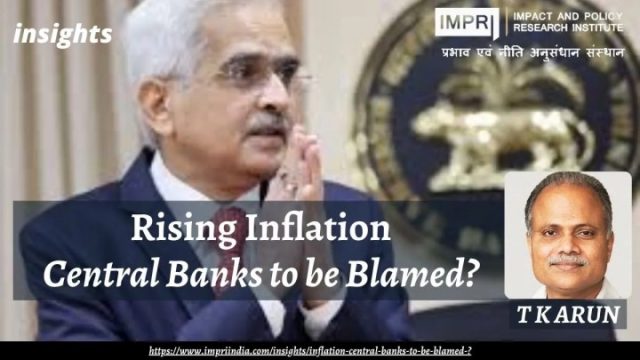 The pandemic, supply disruptions, the Ukraine war, inflation and monetary tightening are hurting a lot of businesses. One cottage industry that deserves to go under but seems to thrive in these conditions is crafting polished wooden crosses on which to nail central bankers of the world for their alleged crime of inflicting inflation on humanity at large.

Central bankers deserve not blame but tonnes of praise and gratitude for their response to the pandemic. They created trillions of dollars of additional liquidity to cushion the fall of economies, as these collapsed under lockdowns. Without that ocean of liquidity to break their fall and let them stay afloat, economies would have crash-landed, piling penury on top of pestilence.

Of course, critics easily dismiss this defence. Central bankers should have stopped pumping liquidity way earlier than they did, they say: instead, they continued with soft interest rates and bond buying to keep interest rates low, and now the common man pays the price, or rather, higher prices.

This criticism is part fatuous, part opportunistic. Economists like Lawrence Summers had been one of the earliest critics of expansionary policies. He is happy to see those who refused to heed his advice now feel polished wood on the skin of their back, behind, calves and arms. After all, inflation is a reality.

Where the inflation came from

But the inflation that has taken hold is derived from supply shocks, wholly unanticipated supply disruptions, not from excess demand. Depending on what causes inflation, monetary policy has different roles to play.

If inflation is caused by excess demand, because people have too easy an access to finance or the government is borrowing hand over fist to compete, in the marketplace, for the very same resources that private economic agents seek, in pursuit of their investment plans, then the solution is, indeed, monetary tightening. On the other hand, if inflation is caused by supply disruptions, a sudden tightening of liquidity can make things only worse.

If there is a drought and food prices go up, or the global oil cartel decides to push up the price of crude, the resultant spurt in prices cannot be addressed by raising interest rates. These prices should be allowed to work their way through the system, to force people to make adjustments in their consumption pattern, finding substitutes where possible, making efficiency gains or curtailing consumption. It is only after this has happened that monetary tightening has a role.

The goal now is to minimise transmission of the first-order price rises to the rest of the economy, creating generalised inflation. Squeezing demand in general would achieve that goal. Squeezing demand at a time when only the prices of specific goods have gone up is to choke growth and depress incomes. We should be thankful the world’s central bankers did not choke off demand prematurely. The sensible course of action was to err on the side of letting people have some minimal income, instead of tightening belts further on acutely concave abdomens.

To fight a forest fire, often the best tactic is to burn off a stretch of forest around the fire before the blaze reaches it. You can adopt such a tactic to fight inflation, too. The trouble is, what you destroy, in one case, would be some trees and shrubs, and, in the other, life and livelihoods of people.

In the good old days when human sacrifice was entirely acceptable, indeed, considered the only decent thing to do to stave divine wrath off the general populace, they used crude methods of stabbing or slitting blood vessels, instead of pre-emptive monetary tightening. Now that we have more anaemic and surer ways of getting the same result, human sacrifice has gone out of fashion. Ecce homo

The inflation that now roils the world is derived from supply disruptions. First came the third wave of the pandemic, which, as well as the recovery from which, staggered unevenly across the world. When people in one part of the world were in a position to demand more goods and services, the places where these things were produced, in whole or, as is more likely in a world of elaborate, distributed division of labour, in part, were under lockdown. The result: inflation.

Some people saw the light while meditating on life at home during the pandemic, and retired prematurely and permanently from the workforce. Some others were eager to work, but could not afford childcare and so were stuck at home, looking after children whose schools were still closed. Yet others had aged relatives or immuno-compromised dependants at home, so they stayed at home. Net result, a shortage of workers. This, too, added to inflation, which had nothing to do with excess demand.

Disruption in global trade and cargo movement was another factor feeding prices.

Then came Xi Jinping’s Zero COVID strategy, which locked entire Chinese towns or districts down, if a lone case of the infection broke out somewhere in the region. This added to supply disruptions. Finally, we have the Ukraine war and the West’s aggressive defence of Ukraine’s right to join a military pact even if it compromised the national security of its neighbour. Boycott of things Russian and Ukraine’s mining of the Odessa port to keep Russians away have led to shortage of grain, edible oil, metals and fertiliser. War-induced uncertainty, rather than actual shortage, has pushed up the price of energy.

No central banker or economist could have foreseen these developments and raised rates in anticipation.

Growth and a little bit of inflation are a better mix for the subsistence-poor than price stability combined with depressed or static incomes. Fixed income earners of the middle class will prefer price stability, even if growth is zero or negative. If central banks adopt a policy that lets prices rise a bit but does not choke off growth, let us raise a cheer for them.

Central bankers are not to blame for inflation. Their policies have preserved some semblance of growth around the world. Give them credit, so that they keep providing some credit.

This article was first published in The Federal as Stop beating down on central bankers.

Read another piece by TK Arun on Covid-The Paradox of Zero Covid & Common Prosperity in China in IMPRI insights.