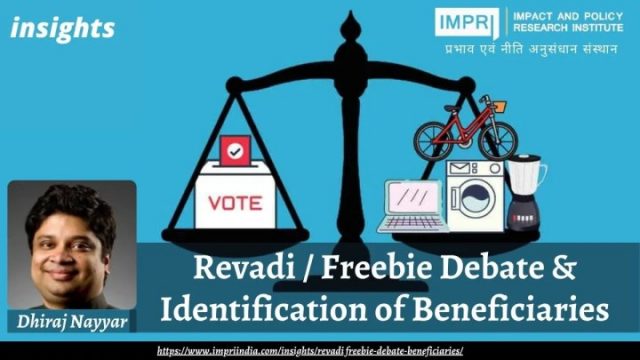 Freebies are an almost essential part of a political democracy, whether in India or abroad. But after watching economic crises unfold in the neighbourhood – primarily in Sri Lanka but also in Bangladesh and Pakistan – there is an unusual public scrutiny on freebies.

Narendra Modi warned against a ‘revadi’ (sweetmeat) culture in politics. The Supreme Court wants an apex body made up of the highest institutions of government to rein in freebies. In reality, freebies are a rather nebulous category. A more nuanced debate is required to sift out what is truly undesirable from what is tolerable, even necessary.

What is a ‘freebie’? In the context of government spending, a freebie may be defined by whether it earns a return or not, the latter being a freebie. For example, a dole or transfer payment given to certain individuals without any productive work in return. Or a consumption subsidy on fuel that earns no return.

This is in contrast to government spending that actually yields economic return – like capital spending on physical infrastructure. But even non-capital spending on activities such as education, health or sanitation are productive investments as they raise the quality of human capital, which is as important to the growth of the economy as the development of physical capital. So, strictly speaking, free education and healthcare are not freebies.

For the haves or have-nots? Is the government providing for free, or at a subsidised rate, something a majority of persons can afford to pay for? In an emerging economy like India, there may, indeed, be sections of the population that need doles/transfers for their consumption expenditures because of a lack of jobs or insufficient pay in jobs. For these individuals, it is not a freebie but sustenance.

However, if the same benefits are extended to people who earn enough, then it is certainly a freebie. Indiscriminate subsidies on fuel, which have now been phased out, were one such example. Across-the-board subsidy in higher education is another example. Cheap electricity is another.

But are they affordable? In India, most government spending is financed from just two sources: tax revenues and borrowing (because spending exceeds revenues). Non-tax revenues are less than 10% of the Union budget. So, if the government must spend more, it must either tax more now, or impose higher taxes in the future. It must weigh this against growth, because the best way to afford more government spending is to grow the size of the economy. Higher taxation is counterproductive to that quest.

An emerging economy will always be able to afford to spend less than advanced, rich countries. The latter can afford to give more doles/subsidies because they have much bigger revenues. Sri Lanka is learning it the hard way. India, on the other hand, has been restrained in its fiscal transfers even at the worst time of Covid keeping in mind the affordability factor. Remember, when a crisis comes, it is the poor who are hit the hardest as even limited fiscal transfers are cut back.

Way in which they’re given. Are freebies given in a way that distorts the efficiency and growth of the economy? Most governments are aware of the need to keep fiscal deficits within a reasonable limit. However, that leads to the temptation of giving off-budget freebies that can have grave consequences.

Consider the provision of free or subsidised electricity to households. State governments do not put this on the budget. They impose the costs on the electricity distribution companies. This practice has hobbled the entire power sector because discoms are bankrupt and are unable to pay generators for power. This leads to problems for them, which, in turn, leads to problems for banks that have lent to them. It also forces governments to charge higher rates from industry which affects competitiveness. It is a vicious cycle that is difficult to break.

Similarly, the minimum support price (MSP) in agriculture distorts the farm economy by incentivising the planting of crops that have MSPs at the cost of all others. Unsurprisingly, non-MSP produce (like vegetables) is where food inflation is highest because of supply shortages. Freebies such as these fester outside the public eye. It would be better for governments to give direct subsidies to the poor who cannot afford electricity, or income support to farmers who earn below a certain amount, neither of which would distort entire markets.

If an apex body does examine freebies, it should begin with the off-budget ones

This article was first published in The Economic Times as Freebie debate continues amid economic crises in India’s neighbourhood.

Read another piece by Dhiraj Nayyar- The Need for India to become a Rare Earths Powerhouse with Private Participation and Modern Mining Norms in IMPRI insights.

Read another piece by Dhiraj Nayyar The real Agni-Path to better jobs in IMPRI insights.