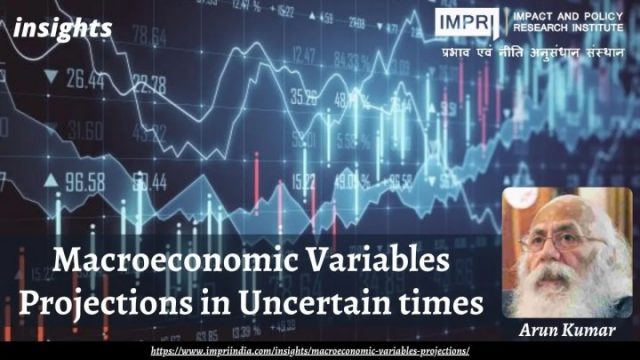 The Fed has raised its benchmark interest rate again by a whopping 0.75%. The Reserve Bank of India has also been forced to raise interest rates further but also take other steps. These decisions in the Monetary Policy Committee (MPC) meeting are based on what the members of the MPC see as the projections or the likely course of the economy in the months ahead. But, the trajectory of the world economy, and its likely impact on the Indian economy, is imponderable. So, Indian policymakers would face two crucial problems.

First, the main uncertainty is due to Russia’s war on Ukraine and the resultant economic sanctions on Russia, as well as the zero-COVID-19 policy in China that repeatedly implements lockdowns leading to global supply bottlenecks. Second, policy has to base itself on data. If it is deficient, it introduces additional uncertainty, making projections for the future difficult and causing policies to fail. This will compound the problem that results from the global uncertainty.

Since early 2020, the SARS-COV-2 virus has caused global uncertainty. Waves of COVID-19 have curtailed human activity with a consequent loss of production. Different countries have implemented lockdowns of varying severity leading to supply bottlenecks. In a globalised interdependent world, production was hit resulting in price rise (inflation) and loss of real incomes. This has resulted in decline in demand and, in a vicious cycle, a further slowing down of the economy. Predicting these declines has been difficult because forecasting when another wave would strike and how much disruption would occur has been difficult. As prices have risen globally and economies slowed down, many countries have faced stagflation.

The uncertainty due to the novel coronavirus has declined in spite of waves of attack persisting because the impact of new virus mutants of the virus is milder and there is also immunity due to vaccination. Countries are not implementing lockdowns so vigorously now, in turn reducing adverse economic impact.

However, China is an exception with its zero-COVID policy. It has been implementing strict lockdowns in the last six months, even when only a few cases of the disease have been detected. Since China is now the manufacturing hub of the world, any disruption impacts supplies globally and causes bottlenecks to persist.

There is another issue now. Monkeypox virus has suddenly emerged and spread rapidly in the last few months to more than 80 countries where it is not endemic. The World Health Organization seems to be confident that this threat can be dealt with more easily than COVID-19. Yet, there is heightened concern and uncertainty.

The war in Ukraine and western sanctions on Russia have caused huge uncertainty since February 2022 (when Russia invaded Ukraine) and displaced the disease-related uncertainty, i.e., COVID-19. The reason is that the war is a proxy war between two powerful capitalist blocs. Both are militarily and economically strong. While Russia has attacked Ukraine, the western powers are supplying arms to prolong the war and weaken Russia. Also, sanctions against Russia are being used to weaken it economically.

Neither side can afford to be seen to be losing. Thus, the conventional war may change to a different and more intense one. Thus, unless a solution is found soon, uncertainty will remain huge and possibly increase. There is needless continuing suffering of the people of Ukraine, with a bombardment of cities, and this could escalate.

The war and the sanctions have already affected the world economy and the Europeans in particular. The U.S. economy has entered a technical recession with two-quarters of GDP decline. Sri Lanka has been devastated, and many other developing economies such as Pakistan and Nepal are in trouble. As supplies of critical items supplied by Russia and Ukraine have been hit, prices have soared. Europe, the United States and India have experienced or are experiencing high inflation.

The biggest disruption is in energy supplies from Russia, impacting production. The availability of food, fertilizers, metals, etc., have been hit as Ukraine and Russia are important sources. Thus, already prevalent high inflation due to the pandemic has been aggravated by the war and sanctions. Since the end of the war and sanctions are uncertain, these problems are likely to persist.

Even if the war ends, a new Cold War between two big blocs has started, i.e., Russia and China on the one hand and the rich nations on the other. To weaken Russia, sanctions may be imposed on countries that carry out trade with it. Many Indian entities may face the heat since India has increased its imports from Russia, which undermines sanctions. China may also face sanctions since it has increased trade with Russia and is backing it. China has little option but to go with Russia since the western powers have been trying to isolate it, fearing its global rise.

In brief, the global economy would continue to be hit in the foreseeable future due to the war, sanctions and the new Cold war between two big economic blocs.

As if the uncertainty from global factors was not bad enough, Indian policymakers also face data-related issues. It is not only available with a big lag on most macroeconomic variables but for many variables, data are either not available or has huge errors.

Policymakers rely on high frequency data to proxy for actual data. For example, very little data are available for quarterly GDP data which is used to calculate the growth rate of the economy. First, except for agriculture, unorganised sector data is not available. Second, for the organised sector, very limited data are available. Third, projections from the previous year or proxies are used — both these introduce errors when there are repeated shocks to the economy, such as the pandemic and now the war.

Price data too are problematic. The services sector is under-represented. Prices of many services have risen and expenditures on them have increased dramatically, thus changing their weight in the consumption basket. For instance, health and education expenditures went up during the pandemic. Also, the impact of the black economy has not been factored in.

Further, the consumer price index is common for the upper classes and the poor. The former consume a small proportion of their income, so they hardly feel the pinch of inflation. The poor consume almost their entire income and have no cushion to increase expenditures commensurate with price rise. Thus, they have to reduce their consumption. Earlier, there was a different index for various categories of people, which reflected the differential impact of inflation on people. This gave a truer picture of the economy and peoples’ distress.

The unorganised sector, which employs 94% of the workforce, has been hit hard by a decline in incomes and a rise in prices in the last few years. It does not have the bargaining power to get its wages increased as prices rise and, therefore, loses purchasing power. The data does not reflect this and the unorganised sector becomes ‘invisibilised’.

Policymakers using such faulty data invisibilise them. If the economy is growing at 7.5% and inflation is under the Reserve Bank of India’s tolerance level of 6%, then policymakers assume all is well. Nothing specific needs to be done for the unorganised sector. But projections go wrong (as has happened in recent times) when policymakers have predicted an economic turnaround and lower inflation. Even faulty official data does not bear this out.

Indian policymakers face the unenviable task of predicting the course of the economy for the next few months and even the year (or years) ahead because of the shocks and faulty and inadequate data. The problem is compounded by international factors. Will the war on Ukraine end soon? And if not, will it intensify? Will sanctions be withdrawn? How intense will the new Cold War be? All this makes projections of macro variables — GDP, inflation, balance of payments, etc. — well nigh impossible and makes policymakers akin to a pilot navigating in dense fog with faulty equipment.

This article was first published at The Hindu as Macrovariable projections in uncertain times.

Read another article by Arun Kumar-Corruption vs Democracy: Which is Important Fight? in IMPRI Insights.

Read another article by Arun Kumar- Five Years of the Goods and Services Tax (GST): Game Changer? in IMPRI Insights.