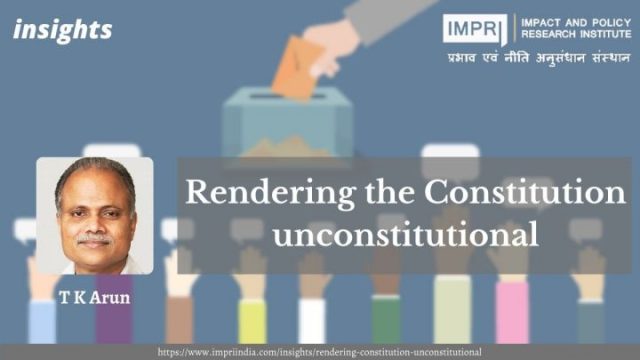 Fundamental rights and the separation of powers among the executive, the judiciary and the legislature are critical to democracy and cannot be sacrificed for the sake of development. Development is not some pyramid of ancient Egypt, to build which it was acceptable to sacrifice the freedom, toil and lives of slaves

Speaking on Constitution Day, November 26, Prime Minister Narendra Modi made a few observations that have the potential to render the Constitution unconstitutional. The PM’s pronouncements augur ill for democracy.

Modi’s focus was India’s development and how this was being hobbled, if not thwarted outright, by not just former colonial powers but also by colonised Indians, who use rights, such as that to free speech and legal recourse, to challenge development projects. He suggested that those who impede development should face the consequences. He also hinted that the separation of powers among the executive, judiciary and the legislature is all very well, but when it comes to development, such separation of powers should give way to working together.

Both pronouncements contain alarming portents for democracy and the viability of checks and balance among the organs of the state. It is a scary proposition that ‘development’ is some absolute destiny, in whose pursuit democratic rights can be sacrificed and the ability of the judiciary and the legislature to check the executive should be dispensed with.

The notion that there is some kind of development of the nation that is divorced from the wellbeing of the people fits in an oligarchy, not in a democracy. If a handful of companies prosper obscenely, carrying out ‘development’ for the nation, and some of the most disempowered citizens see their land being submerged, dug up for minerals or built over for roads and towns, while they themselves go down in history in celebrated case studies on how to not treat the project-displaced, and this is considered a tolerable, even virtuous, sacrifice to achieve development, that is undemocratic and unconstitutional.

Does this mean that the utilitarian notion that the greatest good for the greatest number justifies sacrifices on the part of a minority makes no sense whatsoever? A common device used to explicate the underlying logic is the example of a doctor who has five dying patients who need organ transplants and one patient, generally healthy, who has come in for a consult on a mole: the principle of the greatest good for the greatest number would justify killing the healthy man to harvest his organs, so that five people can now live.

If we find this pursuit of welfare maximisation revolting, it is because we implicitly understand that the rights to life and liberty are inalienable rights that cannot be taken away from someone for the greater good of a majority.

However, if the healthy man can be persuaded to donate a kidney or a slice of his liver, so that others can live, that sacrifice would be entirely in order. When development calls for certain individuals and groups to give up some things they cherish, their land, for example, they must be compensated and resettled and rehabilitated in a way that leaves them at least no worse off than they were when they were in possession of their land.

In India, this has rarely been done. The Narmada Bachao Andolan (NBA) deserves credit for bringing the matter to centrestage. While the NBA chose to reject even improved compensation offers, some of those who accepted those offers have done well — as has been documented by Swaminathan SA Aiyar and Neeraj Kaushal in the short film Damned but not damned.

Letting the vulnerable be

Humans have, over millennia, evolved from a hunter-gatherer primate into a climate-changing transformer of nature. Some tribal groups have moved so little along this evolutionary path that to displace them from their land might well be to end their lives. ‘Development’ should skirt their areas and leave them be.

Who is vulnerable? Whose land should not be taken away at all? Whose land can be taken away with compensation, and how much? Answering these questions could result in disputes. Finding just solutions to such disputes calls for the rights to speech and legal recourse, to interact with the judiciary’s ability to counter executive excess, and the legislature’s role of holding the executive to account.

To rule out such a possibility, because rights should not hinder our ‘development’, and because all organs of the state must be of a single mind, is to deny citizens justice, the very virtue to deliver which, along with liberty and equality, We, the People, gave ourselves a Constitution 72 years ago.

November 26 has been celebrated as Constitution Day since 2015. Why? Did no one ever care for the Constitution before 2015? Creating such a day enables those who had had no particular role in making the Constitution or its antecedents that produced the constituent assembly, to establish a connection with the Constitution, and to pay homage to Dr Ambedkar, who served as chairman of the drafting committee of the Constitution, in an oblique invocation of Dalit support.

The Prime Minister held a special session of Parliament, which much of the Opposition boycotted, for the greater glory of the Constitution — blissfully oblivious to the irony of the Supreme Court having to rein in the state the Prime Minister leads, every other day, as it goes boldly forth into unconstitutional territory, taking away critics’ liberty by arresting them under arbitrary charges and sections of the law that preclude easy bail. Such conduct renders the Constitution unconstitutional.

Can the Constitution be unconstitutional? Can a thing be itself and, simultaneously, not itself? Schrodinger’s cat, we know, was alive and dead at the same time. We don’t have to go to quantum superposition, the particle-wave duality of light or the strange case of Dr Jekyll and Mr Hyde, to illustrate the possibility.

Air is what we breathe to stay alive. However, in that time of winter, when crop stubble is burnt in neighbouring States, the high-decibel merrymaking of Diwali has gone up in smoke and the wind becomes still for a few days, to breathe in the air of Delhi is to self-administer slow poison. The lion is the king of the jungle, but not quite when he is in a zoo or, worse, a circus cage. The parrot is a free bird, which squawks what it pleases, but we all know what a caged parrot is.

The Constitution gives citizens the rights to liberty, equality, non-discrimination, free speech and the due process of the law to curtail liberty. Yet, this very Constitution permits the state to enact certain laws meant for special, emergent contingencies that endanger national security, which curtail those very rights.

Under the political leadership that created the Constitution Day, these special laws have been used against political opponents, civil liberty activists, journalists who presume to verify for themselves what ministers have announced in public, in State after State where the BJP runs the government. Charges of sedition, online trolling, defamation cases, raids by the Enforcement Directorate, CBI investigations pile up against the government’s critics.

Is there a cure for this malady? Indeed, there is a powerful cure and that is democracy. By democracy we do not mean periodic conduct of elections to choose representatives who form governments. Elections must be supplemented with respect for certain inalienable rights and other fundamental rights, facilitated by institutional arrangements such as the separation of powers among the organs of the state and the citizens’ right to dissent and agitate.

Read another piece on Farm Laws by T K Arun titled Should the Repeal of the Farm Laws Brought in by the Modi Government be Celebrated? in IMPRI Insights

Read another piece on Farm Laws by T K Arun titled Farm law repeal: Beyond the subduing of triumphalism in IMPRI Insights