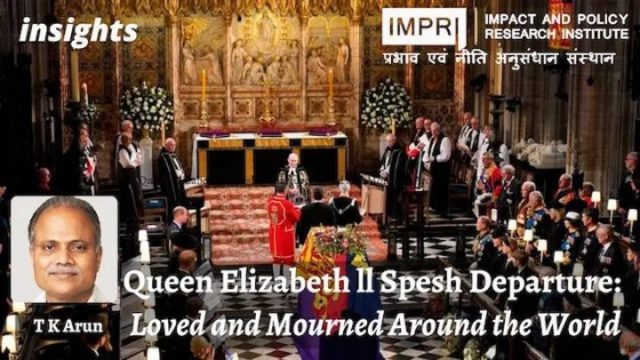 For people who lived through unsettling changes, the monarchy served as a beacon of continuity, and therefore, of reassuring stability; the same Queen bestowing the same beatific smile, from under a similarly unfashionable hat, swearing in prime ministers and comforting people

Over the 10 days since the death of Queen Elizabeth II of the United Kingdom, the number of people who took part, directly or vicariously, in the pageantry of choreographed mourning carefully mounted by the British state, would run to several million. A quarter of a million is supposed to have patiently queued to personally see the Queen lying in state at Westminster Hall.

People mourned from afar as well — not just in Commonwealth nations such as Canada and Australia that still have the British monarch as their head of state, but in other nations too — thanks in part to the popularity of Netflix serials on British nobility. How many other leaders across the globe would be mourned by so many, when they depart?

Before we venture an answer, let us try to understand why the queen was so important to the residents of the British Isles. They were not really her subjects in the sense in which the English were subjects of the Crown before Cromwell, the beheading of King Charles I, the ouster of the Stuarts and the Declaration of Rights presented to Queen Anne and her husband, King William of Orange, who took over from the Stuarts, conceding fundamental rights of the people to govern themselves via Parliament. The Queen was a figurehead, much as India’s President is, in terms of the extent of state power she wielded, although unarguably endowed with more charisma, institutional and personal.

Why did she matter then? She personified the collective identity of the British, in spite of their diversity — in terms of belonging to the different regions of England, Scotland, Wales and Northern Island, each with its own distinct language, tradition and culture. In this, she was like the English football team, whose victory in an international match would enthuse every Briton, even the Scots, who would much rather cheer the Scottish team. But she offered something more than personified collective identity, something which the football team cannot offer: continuity and a sense of reassuring stability amidst turbulent change.

The Queen wore the crown for all of 70 years, presiding over the British state and society as they experienced remarkable change, along with the rest of the world. Despite her favourite Prime Minister Winston Churchill’s best efforts, the unravelling of the empire that began with the end of World War II proceeded apace. Towards the end of her reign, even tiny Jamaica no longer desired her as the head of state, with the demand to turn a Republic gaining unstoppable momentum.

The average British woman in the early 1960s had 2.8 children during her lifetime (the Queen, with four children, was fittingly above the average). Today, that number is 1.75, below the replacement level of 2.1. When Elizabeth became queen, the sexual revolution and the Beatles had been unthinkable. Streams of immigrants from the former colonies added colour to the British population; over the years, Britain turned multicultural. From post-war poverty, Britain grew prosperous. New monied elites, who owed their success to their own efforts rather than to any accident of birth, cast the traditional aristocracy in the image of Bertie Wooster’s Drones Club.

Britain joined the European Union and then left it. Unions grew powerful and then were broken, under Margaret Thatcher. Britain’s manufacturing industries changed hands to foreigners, true-blue British strength rose in finance and the knowledge economy, with its universities churning out first rate thinkers and innovators. The internet and immigrants churned social mores and traditional hierarchies — the offspring of immigrants hold high political office.

Britain joined the European Union and then left it. Unions grew powerful and then were broken, under Margaret Thatcher. Britain’s manufacturing industries changed hands to foreigners, true-blue British strength rose in finance and the knowledge economy, with its universities churning out first rate thinkers and innovators. The internet and immigrants churned social mores and traditional hierarchies — the offspring of immigrants hold high political office.

In his novel The Glass Palace, Amitav Ghosh describes the fallout of the British deposing the King of Burma and sending him into exile in India. The people of Mandalay are heartbroken, they sob. And they loot the Glass Palace, the king’s residence. They cried over the loss of the symbol of their collective identity, a real tangible loss, as tangible as the goods there for the taking in the palace bereft of its royal residents.

The British royalty personifies the collective identity of the people of England, Scotland, Wales and Northern Island. The queen symbolised that royalty for seven decades. Her death was, therefore, deeply disturbing. The elaborate display of measured transition from the era of Queen Elizabeth the Second to that of a new constitutional monarch, organised by the British state, according to a plan thought out well in advance, is meant to let the monarchy continue its role, even when a particular monarch is no more.

In which other nation on earth does a leader represent the collective identity of a nation? Mahatma Gandhi did in India, excluding a tiny minority of bigots whose agent shot him dead. Nelson Mandela fit that role in South Africa, as did Fidel Castro in Cuba.

No constitutional monarch – many still outlive their utility in gilded indulgence and minor scandals in Europe and Asia — has the salience the Queen had in British life. The Thai king is now a figure of division and derision for younger Thais. The absolute monarchs of West Asia are feared, rather than loved.

The Emperor of Japan might come in a distant second, behind the late queen of Britain, cast in the same mould. However, there are two major differences. One, Japan remains a fairly homogeneous society, which does not need extra-cultural bonds of unity. Two, British soft power has rubbed the edge off anti-British sentiment in its former colonies, while Japan has bungled on this count and active dislike lingers on, long after Japan’s wartime atrocities in Manchuria and Korea. That means there would be a largish contingent of those who would express sentiments other than sorrow and indifference on intimations of mortality in Japan’s imperial establishment.

The Queen probably stands in a class of her own.

The article was also published in The Federal as No leader around the world will be mourned the way Queen Elizabeth was on September 21, 2022

Read another piece of article by TK Arun- Global Recession 2023 : A World Bank Indicates An Alarm for Taking Action in IMPRI insights

Read another piece of article by TK Arun- India Overtaking Britain Economy: A Source of Satisfaction – Not A Situation to Brag Much About in IMPRI insights

T K Arun, is a Senior Journalist and Renowned Columnist based in Delhi.