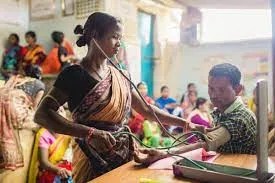 The widening disparity between the Public and Private health services is quite prominent and is visible around us, but the solution to this difference lies in the form of Public-Private Partnership to provide further insights upon the same, Center for Human Dignity and Development (CHDD), IMPRI (Impact and Policy Research Institute) Impact and Policy Research Institute, and Centre for development communication and studies (CDECS), Jaipur organized a talk on Private Sector Engagement and Public-Private Partnership in Health Service Delivery in India under #WebPolicyTalk as The State of Development Discourses – #CohesiveDevelopment.

The session was started by the moderator Prof Sunil Ray, Former Director, A. N. Sinha Institute of Social Studies, Patna, Advisor, CDECS, and IMPRI. He gave a brief introduction to the whole panel. He pointed to the numerous influencing factors like government and politics and the implications for the people. He cogently spoke of the bad condition of the primary health care centers found in the rural areas of the nation.

Prof A. Venkat Raman started the talk by locating for the audience the difference between Public-Private Partnership (PPP) and private sector engagement, but the similarities he believes would be helpful to empower the health sector. He then explained the basic structure of the health sector in both private and public sectors, in urban locations there will always be an increase in demand for private health services despite the ever-increasing prices, which is also vastly different in the rural and public areas.

India presently needs at least 2,000,00 doctors to perform at the world bank standards. India has a vast difference when it comes to hospital beds without setting any standard for the same, a report reflected India would need at least 2 million extra beds to meet the basic standards.

The sad condition of the community health center which looks after such a wide area and still lacks in the health system is particularly worrisome. He also talked about how people spend money on health care out of their pocket, even the poor, and how the government, through its various schemes, tries to compensate them but fails to do so.

He says health care is complex and a complex combination of both would be beneficial. He shed light on the treatment of primary health care by NGOs. Some management programs were divided among the people. He then explained various PPP health service models in India and how their system has proven to be an excellent example for the people of the area.

He mentions various other examples of PSE which are run in collaboration with various NGOs and help sustain and introduce various models which use various area-specific schemes which help introduce a greater health system. He went on to detail how in various western nations, where PPP health care markets have been growing and have matured, helped to have a good healthcare system.

The Perspective of the Discussants

Dr. Swati Sawant Rane highlighted the importance of health and wellbeing. She shared her experiences and showed how the physical and mental environment have an impact on the health system.

She also brought to light the commercialization of life and health care, rather the changes that come into daily life have changed the way of living. She brought up the issues in the current Public Health Policymaking where the people have been situated who have no experience in public health management and the same discrepancy extends to the private sector itself.

She talked about the hierarchy of pharma companies and how they are making these changes that are changing our lives and bringing up this as a threat in our life. She recommends reframing and redefining all the aspects of public health and that the structure should change and would be helpful for us. Along with that she also recommends the change in health policymaking and the important perspective of the health care workers from the bottom is especially important.

Dr. Narendra Gupta brought his perspective to the presentation and his biggest concern was the profit and how that should be figured out. He gave the example of Africa where there is almost no private sector-based health care system, the reason being a less income-based nation.

He then presented how some of the essential systems should be included in private on the public basis, but the private enterprises have and will deny it has not cost beneficial. He also points out the Money making and Politics behind the public health care system, and how it is shown in all the public and private hospitals where it was set up for the people’s benefit.

Prof A. Venkat Raman responded to the point of view that was brought up by the discussants and responded to the nature of the private sector of money-making and how this will corrupt our health care system. But then he replied how various industries in our nations are being handled by PPP and have shown some exponent growth rates for them.

Rather they had so many examples of nations where PPP based health care system is prominent and proved to be helpful towards the citizens, rather he also acknowledges that this system if diverse in our nation should be majorly exclusive to our nation based on the health policy created, he also totally agreed upon the changes that were suggested by some of the panelists for the change in health care policymaking system.

On the question of sustainable partnership, payment, and procurement, the major role has been played by the contract and the terms of contract have to be accepted and clear to both the parties. It is important to tackle the issues in government like corruption. Innovative technology could also provide unique solutions.

Speaking on Ayushmann Bharat, he spoke about the nature and the probability of  risk and how it should be taken collectively by the whole nation not just among the private and the public sector. This still hasn’t been done, if it happens, it could be turned into one of the biggest and the most important welfare schemes in the nation, which could change the Indian health sector.

The issue of primary health care and the stigma of forced family planning has been created among the rural population of the country. But the idea of the change of health and wellness centers in the whole nation could bring a change in the rural health care system which is much needed.

Dr. Swati brings light upon the importance of public health care in a nation like India and along with that the essential role played with it during the Covid Pandemic. Highlighting the issue of poor governance and its effects faced by a larger group of people, she recommended change in governance. Responding to this argument the speaker responded that the differential-based treatment of the private hospital or health sector is less about the big corporation, but rather more about the local privately owned hospitals and nursing homes.