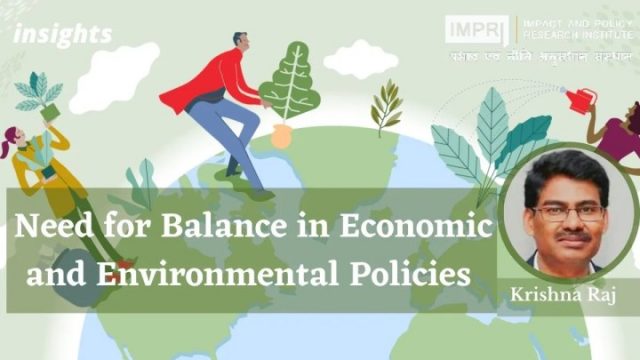 Air pollution is rising due to the failure of the State and the market forces to give importance to the environment. Its genesis lies in the failure of policies and implementation of less stringent laws & regulations to attract more investment from the developed world. The free market considers only the private cost of production. It fails to consider the social cost of pollution.

Post Covid-19, the intensifying of economic activities has commensurately led to a sharp rise in the environmental problems in view of weak environmental laws and governance. This is well observed in the World Air Quality Report 2021, published by Swiss non-profit organisation IQAir, for Particulate Matter (PM2.5).

The report states that India’s PM2.5 level has startlingly reverted to the pre-lockdown levels of 2019. India is in the fifth position with an average PM2.5 concentration of 58.1 microgram/m3. It shows the fast deteriorating and alarming environmental pollution in cities. Comparatively, China’s rank is 22 and the average PM2.5 concentration is 32.6 microgram/m3, reflecting improved air quality.

The report analyses the average annual PM2.5 concentration for capital cities and New Delhi is ranked number one, having the dubious distinction of being the world’s most polluted capital city. It exceeds the WHO PM2.5 standard by over 10 times. Further, India has 12 of the 15 most polluted cities in Central and South Asia. Alarmingly, the annual average PM2.5 concentration for major cities of India (Delhi 96.4, Kolkata 59, Mumbai 46.4, Hyderabad 39.4, Bengaluru 29, Chennai 25.2) has worsened in 2021 as against the 2020 ambient air quality standards, except in Chennai.

It is a known fact that air pollution with high concentrations of PM 2.5 is extremely harmful and is the second leading cause of sickness. PM 2.5 causes frequent lung infections, such as acute respiratory infection, chronic illnesses (asthma, bronchitis, cancer and heart diseases) and death. Realising the millions of death due to air pollution, the World Health Organisation (WHO) has revised the recommended annual PM2.5 concentration from 10 microgram/m3 to 5 microgram/m3.

However, India’s prescribed annual standard for PM2.5 is still high at 40 microgram/m3. The government, through its ambitious National Clean Air Programme (NCAP), aims to reduce PM2.5 concentration by 20 to 30 per cent by 2024. However, the growth and trends of air pollution clearly show the difficult path ahead in achieving the target.

The WAQR 2021 has identified vehicular emission, power generation, industrial waste, biomass combustion for cooking, the construction sector, and crop burning as the major sources of air pollution in India. However, in the absence of the source apportionment of pollution, the report has attributed that the transport sector, directly and indirectly, contributes to 20 to 35 per cent of the total urban PM2.5 concentrations. But it is difficult for the city planners to achieve the air quality standard targets of the NCAP without identifying the sources and share of pollution and pollutants.

The report estimates that the annual economic cost of air pollution is about $150 billion. The economic impact is already being increasingly felt in terms of both direct and indirect costs of environmental pollution in India.

A 2020 study estimated the economic cost of traffic congestion and air pollution in Bengaluru. The traffic congestion has not only reduced the average speed of traffic on major roads of the city to 10-12 kmph in peak hours, indicating a huge time delay cost but also an increase in cases of ailments from air pollution. The direct cost amounts to a loss of productive time of about 38 minutes per day and an annual income loss of Rs 40,668 per commuter.

The estimation at the individual level shows that for every hour stuck in traffic congestion, a two-wheeler commuter loses on an average Rs 181 per hour and a car user Rs 380 per hour, in addition to fuel wastage cost of Rs 16,618 per annum. Apart from the time loss due to traffic congestion, the direct cost of pollution-related illness is averaged at Rs 412 per month and an annual cost of Rs 4,944 per person. The indirect cost of sickness affecting productivity loss is an annual average of Rs 13,104 per person.

The evidence shows that the social cost of air pollution is high and it has larger welfare implications in cities in terms of health and productivity loss.

The reason for the growing trends of pollution in India is the failure of the State and the market forces to give importance to the environment. The genesis of pollution mainly lies in policy failure and the implementation of relatively less stringent laws and regulations to attract more investment from the developed world and make input costs less expensive for foreign industries.

The free market considers only the private cost of production. It fails to consider the social cost of the negative externality (pollution), which is imposed on society at large. Markets fail to reflect the social value of the environment and, consequently, society bears the cost of pollution in terms of health expenditure and wage loss due to sickness.

So, when both the State and the market forces have failed to protect the interests of the environment and society, the National Green Tribunal has stepped in with its intervention for the enforcement of environmental standards after witnessing an increasing violation of environmental laws and poor governance. The NGT has appropriately invoked the ‘Polluter Pays Principle in many cases in recent times under Section 20 of the National Green Tribunal Act, 2010, and made polluting units liable to pay environmental compensation (EC). In fact, the EC is not just to punish the polluting units but also gradually bring behavioural changes among the polluters to comply with environmental laws and standards.

In this light, the increasing level of intolerance in some quarters of the industry against the NGT is unwarranted. India’s economic growth and development can be sustained when natural capital (environment) and human (health) capital are secured.

Krishna Raj is a Professor at Institute for Social and Economic Change, Bengaluru