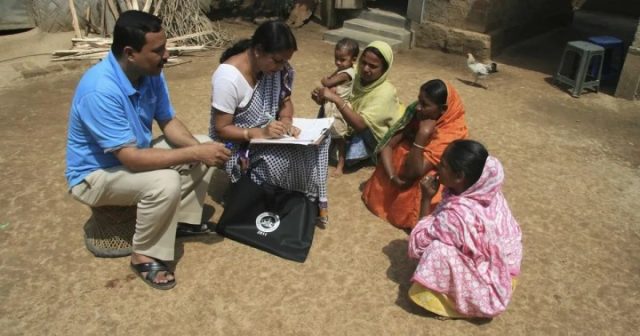 The discussion was started by Prof. Vibhuti Patel, who offered a highlight about the importance of the National Family Health Survey (NFHS) and its importance since its establishment. She discussed how the NFHS has been developed over the years with various concentrated issues and played an essential role in providing data. Talking about the recent findings of NFHS where women have outplayed men not only in terms of population but also in bank account ownership. However, the biggest issue of worry is the high trends in the increasing health issues among them.

Prof Sayeed Unisa brought light upon the NFHS by highlighting its importance and how it is an essential indicator of providing data for public health. Then she broke the basic conception of NFHS as a census followed by which she brought the differences between them and how it is done differently. She talked about various factors of NFHS over time like the sex ratio. She elaborated on the difference between the sex ratio from NFHS and the Census, and how it has developed in the nation among low infant mortality and better life expectancy for women.

She later continued to explain how various demographic facts like migration have helped to change the sex ratio of various states like Bihar, Uttar Pradesh and Chhattisgarh. She also talks about nutrition in which the underweight has decreased but the level of anaemia has increased under specific age groups. Talking about the education attainment by sex, it shows that still there is a disparity between the educational access to women, which would show its effects in longer periods. Employment and ownership ratio among the women have also shown exponent changes, which are conflictual in nature as lack of proper data but an optimistic assessment.

Prof Mala Ramanathan, talked about the mortality levels and how the disparity among them should not only be because of the COVID-19 pandemic but because of the various factors which have been involved within. She later goes on to talk about the difficulties faced by women during COVID-19 and how the data of this report have, up to a certain extent, comprehended the same.

She presents her views upon the declining fertility rates and how there is a huge difference among various states with respect to the NFHS 4. She also highlighted that the use of contraceptives has been very little all around the nation, which is a remarkable achievement to showcase. Over this time, various modern methods have taken over, which shows how the responsibility of both, men and women, has shown increased.

Ms Poonam Muttreja explains how the difference brought by the NFHS and various family issues, like gendered violence, gives shocking results. She also compared how many of these data have been corrupted and infected because of the men of the house. Rather she also claims various other surveys which tell completely different stories. As part of the public health organizations, they should now make contact with the police a compulsion in the name of gendered violence.

. She also tells how many of these indicators should be more elaborated and organized as the data is very dynamic which couldn’t always be comprehended easily. She elaborated on her first-hand experiences with legitimizing domestic violence, which was different altogether from the survey organized by her organization. She also talked about the men’s movement in a district to not practice domestic violence and help in childbearing. Further, on the increase in bank account ownership among women, she claimed that it might be because of the various welfare schemes which could be very helpful in various aspects.

Our next speaker, Mr Ravi Duggal elaborated upon the developments according to him the improvements in NFHS 5 and 4 is marginal and not radical. But he also acknowledges that if we move upon this pace of development, we won’t be able to meet the sustainable goals. Rather he highlights how the rural health infrastructure is weak and talks around primary healthcare is missing. He focused on the budget; no real-life developments were made for the COVID-19 situation, so no utilisations shall be expected.

He highlighted various aspects and results in the healthcare sector, where various indicators are disappointing; he believes that there is a factor behind which is very hidden. Moving on to the positive data, he said that tuberculosis data by the NFHS is very extremely gendered. While the disease is exponentially increasing among women, there is a huge drop among men. He highlighted how post-natal care, which is not disintegrated based on sex is interesting as it has various implications, like those various statics that could reflect important social issues.

Prof Unisa reflected upon the arguments made by Mr Duggal. She also comprehends the difficulties on the face-to-face interviews which should be acknowledged and brought to light, like the issues on violence would be very difficult among the people. Rather on her way forward, she believes that the NFHS should not only be the method to be used as a way of understanding and evaluation, rather it should be comprehended with the use of various other reports along with them. Prof Ramanthan believed the male responsibility of the home or the child should be increased, which is important. She did reflect how various changes are on the move in the society but still, it should be made more eminently public so it could not only be improved but are reflected upon a better.

Ms Muttreja believed that male sterilization and the stigma around, should be distorted and the rise of women sterilization and normalization should be happening. She also talks about implants and how medical technology should be adopted to reach for contraceptives. The issues on the later family planning should be done. She concluded by saying how a family is told to be an essential institution but then ignored on the public and policy levels. Mr Duggal believed that the gap, not only on reporting but also on the associability on treatment, is quite proficient along with the number of diseases still prevalent among men. The positive point is that there is a jump in the health insurance cover among both men and women. Prof. Vibuti Patel reflected her views and presented the important points brought in the discussion; the panel discussion ended with the common vote of thanks.

Youtube video for National Family Health Survey Round 5 (NFHS-5), 2019-2021 under a Gender Lens at IMPRI #WebPolicyTalk