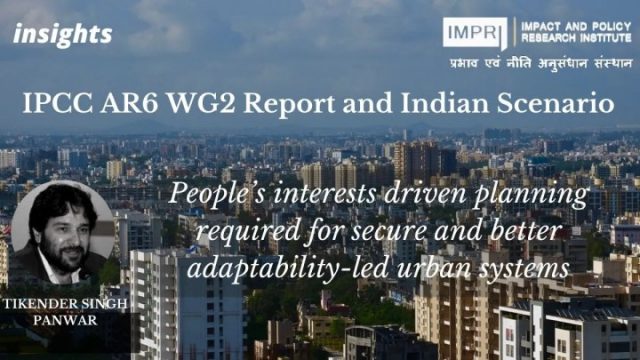 To imagine secure and better adaptability-led urban systems, one must focus on urban planning, driven by people’s interests.

“Oh, that house? It’s in the sea now- there!” a story on the PARI website describes the engulfing of a house and many other houses in Uppada village, East Godavari district of Andhra Pradesh. T Maramma’s joint family lived in that house until the early years of this century. The sea levels are rising, the impact of climate change is real!

Behold, it is not just the sea levels that threaten the thousands of kilometers of receding coastline in India and other continents. The mountains are also facing the same wrath of climate change; frequent flooding, receding of the snowline, increase in vector-borne diseases, etc., have become a common phenomenon.

The effort to keep atmospheric temperature not more than 1.5 degrees C above the pre-industrial levels is not heading very progressively. The largest contributor towards global warming-emission of carbon gases continues unabatedly, and the global response for sustainable development is rather tardy.

The latest IPCC (Intergovernmental Panel on Climate Change) was released on February 27, 2022. This is working group 2 (WG2) of the 6th Assessment Report(AR6). A large number of scientists across the world were engaged in writing this report.

The report is voluminous and runs into 3,676 pages. The report points out the interdependence of climate, ecosystems and biodiversity, and human societies. It also integrates knowledge across the natural, ecological, social, and economic sciences, which is a departure from earlier IPCC assessments.

This is good. The impacts and risks, as well as adaptation, are seen in concurrence to non-climatic global trends-biodiversity loss, overall unsustainable consumption of natural resources, land and ecosystem degradation, rapid urbanization, human geographic shifts, social and economic inequalities, and a pandemic. This is quite an ambitious work.

The WG 2 points out the increased frequency of intense extreme events and damages to nature and people beyond climate variability. The most vulnerable people and systems are observed to be disproportionately affected;

The rise in weather and climate extremes has led to some irreversible impacts as natural and human systems are pushed beyond their ability to adapt.

Another important observation is: “Current unsustainable development patterns are increasing exposure of ecosystems and people to climate hazards.”

So, the patterns of development are unsustainable and need a complete rethinking and reimagining to ensure a secure future linked to mitigation and adaptive strategies. Such a formulation has come for the first time.

The WG2 also lays immense emphasis on the cities. Why? The simple answer is that nearly 4.2 billion people, i.e., more people now live in cities worldwide. Cities are significant contributors to climate change. According to UN-Habitat, cities consume 78% of the world’s energy and produce more than 60% of greenhouse gas emissions.

Globally, urban populations have grown by more than 397 million between 2015-20, more than 90% of this growth occurring in Less Developed Regions. And the most rapid growth, according to the report, in urban vulnerability has been in unplanned and informal settlements and in small to urban medium urban centers in low-and middle-income nations where adaptive capacity is limited.

Therefore, any paradigm shift in meeting the challenges of climate change must consider cities as the core areas. Not just that, only 25 megacities of the world produce 52% of the carbon emissions, exhibited in a study of 169 cities.

The most welcome formulations of the report are that it goes beyond the prism of technocentric solutions and speaks about systemic changes. There are 183 pages of the report that deal with the urban conundrum.

The main areas that it touches upon are: planetary urbanization and climate risk; risk creation in cities, settlements, and infrastructure; dynamic interaction of urban systems with climate; infrastructure interdependencies; compound and cascading risks in urban areas; impacts and risks of urban adaptation;

Second, COVID-19 has had a substantial urban impact and generated new climate-vulnerable populations. Impacts on health, livelihoods, and well-being are felt disproportionately by economically and socially marginalized people.

Third, urban areas and their infrastructure are susceptible to compounding and cascading risks arising from extreme events and increasing urbanization. Losses become systemic.

Coastal cities across the globe find a special mention owing to their disproportionate impact on them. The report states their vulnerability is high because of exposure to multiple assets, economic activities, and large populations concentrated in narrow coastal zones. Early impacts of accelerating sea-level rise have been detected.

Adaptation and mitigation strategies are essential in the given circumstances. But what is required for immediate intervention is large-scale intervention to ensure minimal damage from the “Tsunami”, which is more than evident in the urban sector. The report also points out some of the adaptation plans made by the cities. According to the Sendai Framework – disaster risk reduction(DRR), preparing the disaster atlas of the city is the most definitive work. Most cities have not even measured their disaster risks, and those who have their documents prepared are seldom taken to practice.

What we find across the world is a complete mismatch between these adaptability processes. The problem is more acute in South Asian nations.

WHAT IS TO BE DONE?

There are many things—both immediate and long-drawn. For long-term mitigation challenges, the entire urban development process must be revisited. I recall this interaction with John Closs (Executive Director of UN-Habitat) in Quito in 2016 during the UN-Habitat III conference; he vociferously pointed out that the current model of laissez-faire driven urban development model is completely unsustainable and that we must go back to the basics of planning.

Now, what does it mean? In simple terms, it means that the free-market economy drove the model of treating cities as “engines of growth”, and anything, but growth is sacrosanct; such logic is plundering the social and ecological fabric through processes like- land monetization; privatization of service utilities, usurping of urban commons, etc. This is the neoliberal paradigm of urban development.

Historically it is proven that this is incorrect. Samuel Stien, a US-based planner in one of his seminal works-“The Capital City”, points out the combination of this nexus between urban planners and the big real estate capital giants like ‘Blackstone’. Such models are completely unsustainable, both ecologically and socially, and create humongous amounts of inequity in the social system. Maximizing profits also ruin the urban ecology and resilient capacities of the cities.

Let me share two anecdotal experiences explaining the above. The first one is an interaction with the mayor of Montreal in a world mayors congress. She pointed out how the federal government-driven mobility system of more highways and cars (because of push from oil and automobile capital) had even jeopardized their city mobility and did not focus on public transport. They were, she said, revisiting the entire strategy and bringing in a shift from private automobile-driven mobility to public transport, thus also reducing their carbon footprint.

The second one is from the building typologies. The push from ‘glass capital’ to ensure “dead walls” in the building typologies made of glass. This did not just increase the energy intake for cooling and heating purposes in respective climatic scenarios. This typology has also proven that the glass is the worst form of health hazard, particularly noticed during COVID-19. Instead, more ventilated houses must be the way forward.

Hence, to imagine secure and better adaptability-led urban systems, one must focus on urban planning, driven by people’s interests. Such planning must focus on health, decent, affordable, and sustainable housing, and infrastructure. Simultaneously, the report points out that “retrofitting, upgrading and redesigning existing infrastructure, combined with planning and designing new urban places, can utilize existing knowledge on social policy, nature-based solutions with safeguards and grey/physical infrastructure to build inclusive processes of adaptation into everyday urban planning and development.

The Indian cities are considered one of the most vulnerable from a climate change impact perspective. The coastal towns and cities are already facing the perilous danger of receding shorelines. The towns in plains and mountains are experiencing both heat island effects and frequent flooding.

The vulnerability has increased due to faulty city development processes in the last few decades. Akin to the global trend, Indian policy decisions were also adapted to make cities competitive and attract investments from global capital. This began in the early 90s but was accentuated with the present regime. To do this, city planning was handed over to the big transnational corporation consultants, who in connivance with the developmental authorities(DDA, MMDA, GMDA, etc., invariably all city development projects were prepared by such authorities), pushed for hard infrastructure development in tune to large capital.

For example, in the mobility sector, the push was and continues to be for more flyovers, expanding the road networks in the cities instead of public transport. Likewise, waste to energy plants, large capital-intensive water, and sewage treatment plants, more real estate development without giving ample space for open green areas, and urban commons was the desired trajectory.

The latest addition of such reforms is the ‘smart city plan’; these cities were supposed to be lighthouses for BJP’s model of urban development. However, most of the smart cities chosen for development have proven to be where urban flooding has increased. Because hard infrastructure without a comprehensive plan has damaged the existing water channels, thus blocking their pathways. Patna, Gurgaon, etc., are part of such plans.

India needs to revisit its planning strategy, which should be people-centric. Simultaneously, it should empower local governments to meet their adaptive capacities and support them in preparing their disaster atlas to ensure minimum damage to lives and assets.

Tikender Singh Panwar is the former deputy mayor of Shimla and is currently a senior visiting fellow at the IMPRI Impact and Policy Research Institute and an advisor to the Samruddha Bharat Foundation.