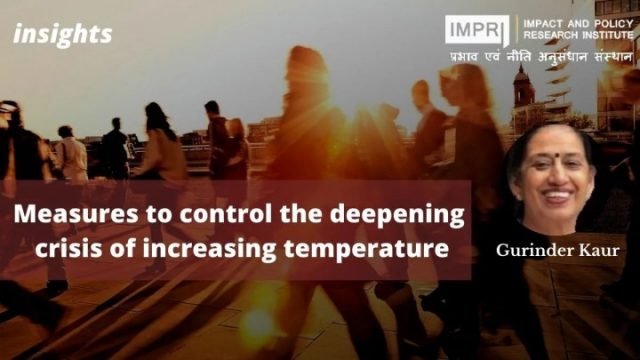 The third installment of the Sixth IPCC report

Growing faster than previously thought, rising global temperature has led to a sharp rise in the number of natural disasters, such as extreme heat and cold, short-term rainfall, droughts, floods, hurricanes, and the like. The third installment of the sixth IPCC report discusses numerous strategies to limit greenhouse gas emissions in different sectors and presents realistic calculations to stop the global mean temperature increase by 1.5 degrees Celsius.

Emissions of greenhouse gases in the decade 2010-2019 were 12 percent higher than in 2000-2010 and 54 percent higher than in the 1990-2000 decade despite the IPCC’s repeated warnings that the time to limit dangerous global warming is running out. If greenhouse gas emissions are not cut sharply and continue at the current rate, by the end of the century, all the countries in the world could face a rise in temperature of 2.4 to 3.5 degrees Celsius. This will force all the countries of the world to bear the brunt of more natural calamities.

The budget for the remaining greenhouse gases is likely to expire before 2030, thus limiting global warming to the 1.5 degree Celsius limit of the Paris Climate Agreement. This sixth installment of the report also suggests that if the average global temperature rise is to be limited to 1.5 degrees Celsius by the end of the century, then all the countries of the world should cut  43 percent of their total emissions of greenhouse gases by 2030. The report warns that we have very little time left, but it is still possible that we can overcome it, which requires swift action and determination. If not now, the never-ending situation may arise.

All the countries of the world still have options, all that is needed is willpower. The United Nation Secretary-General Antonio Guterres has said that although the road is narrow and difficult, all nations must now work to save humanity. We are on a fast track to climate disaster: Major cities underwater, unprecedented heatwaves, terrifying storms, and widespread water shortages. This is not fiction or exaggeration. It is what science tells us will result from our current energy policies.

A team of scientists has said that the sixth report is a file of broken international climate agreements and empty promises that describe each promise sequentially. Although efforts to curb global warming began with the “Earth Summit” in Brazil in 1992, no meaningful steps have been taken so far.

The fifth report of the IPCC in 2014 found that no country in the world could escape the effects of global warming. It will hit all the countries, rich and poor, small islands and large continents. In the first and second installments of the sixth report, it is clearly stated that the rise in temperature is due to human activities and the worst hit are the poor people and the poor countries.

After the release of the IPCC report in 2014, although all the countries of the world had pledged to reduce their greenhouse gas emissions under the Paris Climate Agreement in 2015, most of the countries have not paid any attention to it. Actually, most countries make promises and agreements at conferences but refrain from putting them into practice.

The sources of energy must be rapidly changed. Efforts to replace coal, oil, gas, and diesel with renewable energy sources such as wind, water, and solar must be accelerated. China, the United States of America, and India should shut down their coal-fired power plants as they are currently emitting far more greenhouse gases than any other country in the world.

The third installment of the sixth IPCC report offers some positives, the cost of generating solar and wind energy has decreased by 85 percent since 2010. If all the countries of the world produce energy from sun and wind instead of coal, then perhaps they will be able to control the rise in temperature.

The report suggests paying more attention to agriculture and forest conservation. All the countries should sow/plant crops in different regions of their country according to the local environment. In many places profitable crops are sown/planted that do not match the environment and natural resources of the area, resulting in an imbalance of natural resources and environment.

For example, the Government of India through its Minimum Support Price policy has imposed the paddy crop on  Punjab to alleviate the shortage of food grains in the country, which is responsible for its rapidly declining groundwater table and increasing air pollution. The crop also releases methane gas into the air, which is more capable of heating temperature than carbon dioxide.

Forests are called the lungs of the earth because forests release oxygen into the atmosphere for respiration of all kinds of organisms and absorb carbon dioxide from the atmosphere. In order to balance the natural environment, forests must cover 33 percent of the area in each country.

At the same time, care should be taken that the forest/tree species should be adapted to the local environment. According to a 2018  IPCC report, humans have transformed 70 percent of the earth through their activities to satisfy their cravings, with many ecosystems being wiped out and many on the brink of extinction. Therefore, all the countries should make every effort to maintain the existence of ecosystems.

The third installment of the sixth IPCC report has suggested necessary changes in land-use practices, reduction of carbon emissions and pollution in industries, low carbon buildings, and improvement in means of transportation. Cities emit more greenhouse gases than villages, that is why they are also called ‘ Heat Islands’.

We need to reduce activities in cities that consume more energy. Roadside and unnecessary electric lights in homes should be turned off. These days buildings in cities are using modern technology to replace wood and bricks with glass which requires more energy to keep them cool and hot and glass releases more hot air into the atmosphere than wood and bricks. Therefore, governments and people should redesign cities and their activities.

Vehicles emit large amounts of greenhouse gases into the atmosphere. According to the third installment of the sixth IPCC report, if the necessary modifications are not made in the present mode of the transportation system, the emission of carbon dioxide from the mode of transport alone is sure to increase by 50 percent by 2050. The report suggests that governments could reduce one-fourth of the energy consumed in transportation by building car-free infrastructures such as pedestrian and cycling roads.

It is also important to mention here that if greenhouse gases emitted from the means of transport are to be reduced, then every country must make the means of public transport so efficient that people automatically abandon the means of private vehicles and use public transport. Instead of car companies, companies that make public transport such as buses and trains should be encouraged by giving subsidies. Tax rates on private vehicles should also be increased. In addition, air traffic is growing rapidly which is generating a large number of greenhouse gases, there is an urgent need to find new sources of energy in this area.

In addition to the above suggestions, the report also suggested changes in eating habits. One of the major reasons for the change in land use is the growing trend of non-vegetarian food. The increasing trend of non-vegetarian food is largely responsible for deforestation. Large-scale deforestation is taking place for livestock shelters and fodder. Livestock is also releasing large amounts of carbon dioxide and methane gases into the atmosphere which are warming the environment.

The report specifically states that high-income households account for 36 to 45 percent of total greenhouse gas emissions, while low-income households account for only 13 to 15 percent. According to this IPCC report, we now have very little time to save the environment and human life. Therefore, we must rapidly reduce greenhouse gas emissions from various sectors. Energy should be replaced by renewable sources instead of coal, gas, and petroleum products. Developed countries and high-income people need to make drastic changes in their way of life. According to the report, if the world’s richest segment changes its energy consumption trend, greenhouse gas emissions could be reduced by 40-70 percent. We need to electrify public transport.

The developed countries are emitting more greenhouse gases into the atmosphere than the developing countries. Therefore, developed countries should rapidly reduce their emission of greenhouse gases with the help of modern technology. In order to provide financial and technical assistance to the poor and developing countries to compensate for the losses caused by climate change, the developed countries should now generously help instead of evading. All the nations of the world must unite and take swift action to stop the rise in temperature or else the earth and its inhabitants will be pushed towards an unpredictable future.

Read more by Dr.Gurinder Kaur at IMPRI Insights on Counter Magnet and Satellite Towns are not Necessary for Shimla.

Read more by Dr.Gurinder Kaur on Implications and Solutions: Air Pollution in Delhi and Surrounding Cities at IMPRI Insights