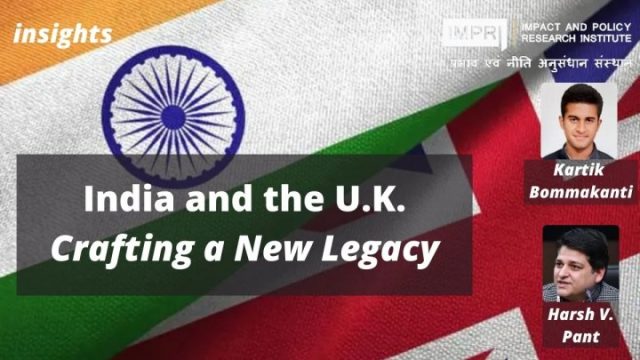 Despite the challenge posed by the war, the India-U.K. relationship has been on an upward trajectory

The war in Ukraine has brought unexpected changes in the world as global powers seek to recalibrate their foreign policies. India’s position has been in the spotlight in recent days with New Delhi hosting diplomats and dignitaries from various countries. On March 31, the U.K. Foreign Secretary, Elizabeth Truss, visited New Delhi as a part of a wider diplomatic push. She had visited India last October. Ms. Truss met with External Affairs Minister S. Jaishankar and also participated in the inaugural edition of the India-U.K. Strategic Futures Forum, a Track 1.5 Dialogue.

Despite the challenge posed by the Ukraine crisis, the India-U.K. relationship has been on an upward trajectory, exemplified by the conclusion of a Comprehensive Strategic Partnership on May 4, 2021. The agreement also established a 2030 Roadmap for India-U.K. relations, which primarily outlines the partnership plans for the bilateral relationship. During her visit to New Delhi, Ms. Truss emphasized countering Russian aggression and reducing global strategic dependence on Moscow by underlining the importance of democracies working cohesively to deter aggressors.

Furthermore, she highlighted the importance of developing deeper ties between Britain and India in the Indo-Pacific which would not only result in job creation but also foster security in the region. She also furthered talks on defense-related trade and deepening cyber security and defense cooperation between the two countries.

A new joint cyber security program is set to be announced, which aims to protect online infrastructure in India and the U.K. as both parties attempt to carry out joint exercises to combat threats from cybercriminals and ransomware. India and the U.K. also plan to hold the first Strategic Tech Dialogue, a ministerial-level summit on emerging technologies.

Additionally, the U.K. and India have agreed to strengthen their cooperation in the maritime domain as the U.K. will join India’s Indo-Pacific Oceans Initiative and become a major partner on maritime security issues in Southeast Asia. In 2021, HMS Queen Elizabeth and the Carrier Strike Group took part in a military exercise with the Indian Navy in the Bay of Bengal before proceeding to exercise with the navies of Singapore, Malaysia, and Thailand.

India is a key strategic partner for the U.K. in the Indo-Pacific both in terms of market share and defense, as was underscored by the signing of the Defence and International Security Partnership between India and the U.K. in 2015. The U.K. is a regional power in the Indo-Pacific as it possesses naval facilities in Oman, Singapore, Bahrain, Kenya, and British Indian Ocean Territory.

The U.K. has also confirmed £70 million of British International Investment funding to support the usage of renewable energy in India, which will help in building renewable energy infrastructure and developing solar power in the region. In January, India and the U.K. managed to conclude the first round of talks for an India–U.K. Free Trade Agreement. The negotiations reflected shared ambitions to secure a comprehensive deal between the fifth and sixth largest economies in the world as technical experts from both sides covered over 32 sessions encompassing 26 policy areas.

The first round of negotiations laid the groundwork for subsequent rounds which were held in March 2022. India and the U.K. are expected to meet this month in New Delhi with the expected possibility of signing an early harvest deal. New Delhi has sought easy market access for Indian fisheries, pharma, and agricultural products besides duty concession for labor-intensive exports.

For Britain, a successful conclusion of an FTA with India would provide a boost to its ‘Global Britain’ ambitions as the U.K. has sought to expand its markets beyond Europe since Brexit. Britain has been trying to seize opportunities in the growing economies of the Indo-Pacific to cement its place on the global stage as a serious global actor.

Amid a renewed optimism about the trajectory of the India-U.K. relationship, British Prime Minister Boris Johnson is expected to visit India at the end of April. Mr. Johnson and Prime Minister Narendra Modi last met on the sidelines of the COP26 in Glasgow in November 2021 where both leaders focused on the India–U.K. Climate Partnership. During his visit, negotiations on the FTA are expected to gain further impetus as the 2030 Roadmap aims to double bilateral trade between India and the U.K. by 2030.

Both India and the U.K. are serious about overcoming legacy issues and engaging in robust dialogues to promote cooperation on strategic and defense issues both in the Indo-Pacific as well as at the global level. The newer areas of cooperation — namely, fintech, market regulation, sustainable and green finance, and cyber security — have emerged as the new frontiers of this engagement.

The notable success of the collaboration with Oxford-Astra Zeneca and the Serum Institute of India in producing Covishield vaccines in India has been just one of many instances of potential successful cooperation. The forthcoming visit of Mr. Johnson to New Delhi signifies the importance of India’s role in the dynamically changing global order as New Delhi prepares itself to host multiple foreign leaders in the upcoming months and the G20 presidency in 2023.

As India seeks to carve out a new role for itself in the evolving global order as a ‘leading power’ and the U.K. recalibrates its strategic outlook post-Brexit, this is a unique moment in India-U.K. ties.

The top leadership in the two nations remain committed to building a lasting partnership and in the process, older issues like Pakistan have become marginal in the bilateral discourse. New geopolitical realities demand a new strategic vision from London and New Delhi. It is time to seize the moment and lay the foundations of a partnership that can respond adequately to the challenges of the 21st century.

This article was first published in the Hindu as India and the U.K.: Crafting a new legacy on 12th April 2022

Rahul Kamath is Research Assistant with ORF’s Strategic Studies Programme. His interests include Europe and the European Union with a focus on Central and Eastern European affairs