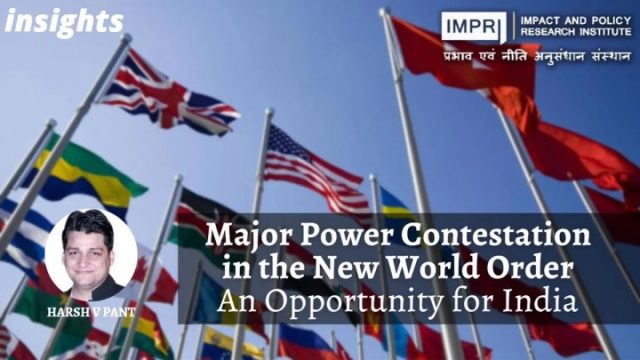 In this age of major power contestation and withering away of the multilateral order, geopolitical equations are being rejigged. To say that the year 2022 has been a tumultuous one would be an understatement. Even as the year comes to an end, Russia continues with its bombardment of Ukrainian cities, targeting Ukrainian energy infrastructure with missiles and drones. Russian President Vladimir Putin has defended the attacks as a response to a blast on the Russian bridge to annex Crimea in early October. Moscow is hoping to demoralize the Ukrainian population; instead, the Ukrainian resolve seems to be steadfast, refusing to wilt under the below-freezing temperatures with disrupted energy supplies.

The US is now supplying the Patriot air defense missiles to Ukraine, responding to the growing air threat amid concerns that Iran may supply Russia with longer-range ballistic missiles. Despite some voices in Europe calling for dialogue, it is unlikely to materialize anytime soon.

The world’s second most powerful nation, China, is facing multiple pressures. In a matter of days, the Chinese Communist Party reversed its zero Covid policy as it came under pressure from the wider public that was tired of Xi Jinping’s strict Covid measures. China eased its stringent Covid restrictions suddenly after protests erupted last month in the city after city, with some even demanding Xi’s resignation.

And now with the Covid restrictions gone abruptly, the health system is struggling to cope as infections are rising rapidly. But internal challenges are not preventing Xi Jinping from taking a backseat on the aggression front. Recent clashes along the Line of Actual Control (LAC) in the Tawang Sector in Arunachal Pradesh underscore Beijing’s intent to continue to make an effort to unilaterally change the status quo along the border. The fact that Indian forces have resolutely rebuffed a quantitatively and the qualitatively superior army would further drive the Chinese Communist Party into making an effort at teaching India a lesson.

That this is happening at the time of sharpening geopolitical and geoeconomic contestation between the US and China makes New Delhi particularly vulnerable to Chinese coercion. This competitive pressure due to an intensified US-China rivalry is only likely to intensify in the coming years as the US strengthens its partnerships in the Indo-Pacific and tightens the screws on technology exchange with China. The Biden administration has announced a series of export controls in recent months to cut China off from US technologies, targeting Beijing’s ability “to obtain advanced computing chips, develop and maintain supercomputers, and manufacture advanced semiconductors.”

Geopolitics is back in the driving seat as trust becomes an essential factor in shaping economic decisions. As Washington makes policy moves to deny access to critical technologies to China and restructure supply chains away from Chinese overdependence, it recognizes the need for new partnerships with like-minded nations. In the words of US commerce secretary Gina Raimondo, “In our competition with China to shape the 21st-century global economy, we [the US] cannot go at it alone.” She also underlined that other nations also “voice similar concerns about China’s behavior and a shared desire to cooperate and coordinate our policies around the rules, standards, and values that advance our collective national security.”

The corporate sector is coming to terms with this new phase in geoeconomics. Morris Chang, founder of Taiwan Semiconductor Manufacturing Co. (TSMC), which is setting up its $40 billion first advanced chip plant in the US in more than two decades has warned that “globalization is almost dead and free trade is almost dead” while “a lot of people still wish they would come back, but I don’t think they will be back.”

This may be an exaggeration, but as Washington pushes for supply chain restructuring in critical industries due to foreign policy and national security concerns, this is certainly ushering in a new phase in globalization. Forces of untrammeled economic globalization, once viewed as a panacea for all global problems, are now under retreat. And if emerging technologies are going to determine the course of the next phase of geopolitics charts, then the polarization of their supply chains is the new reality that policymakers and market forces will have to contend with.

Political trust is likely to drive economic and technological cooperation despite the costs it would impose on nations. If the US started this process of economic recalibration, it is Europe that is shaping its final contours. What China’s rise and assertion did for the US, and Russia’s aggression vis-à-vis Ukraine has done for Europe. It has finally made Europe realize the limitations of its ambition to emerge as “an empire of norms.” Europe has finally woken up to the challenge of global disruptors, be it in Eurasia or in the Indo-Pacific.

With the center of gravity of global politics and economics shifting to the Indo-Pacific, there is a renewed realization in the West that while Russia may be a short- to medium-term problem, the real challenge is China, which has to be tackled head-on as the Moscow-Beijing axis is only going to get stronger in the coming years. The West will continue to use various instrumentalities at its disposal to reduce its economic reliance on China for critical products and limit China’s access to strategic technologies even as it will seek new strategic partnerships with like-minded nations.

Beijing will respond in kind, of course, but the old economic order that it could exploit to its advantage no longer exists today. India’s role will be key in the emerging geopolitical order, and with its G20 presidency, it will be able to shape the global agenda in 2023. But beyond that, this is a moment when Indian policymakers will have to carefully assess their policy choices given their long-term implications.

Using the extant balance of power to its advantage is key to a nation’s rise in the global hierarchy. This is an inflection point in the global order. New Delhi needs to appraise it seriously and respond proactively.

This article was first published in Financial Express as An Inflection in world order on December 21, 2022.

Read more by the author: Indo-Pacific and the new normal