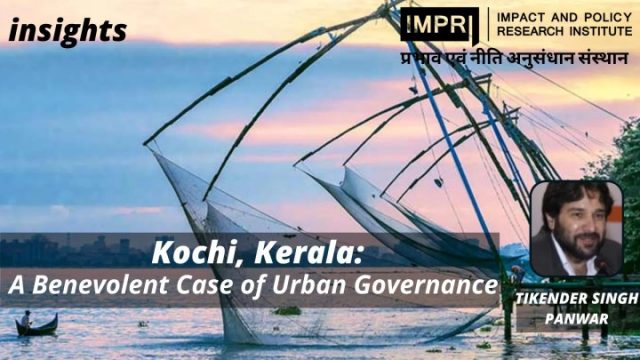 By providing affordable meals to the poor and working class and launching a new accommodation facility for women, the City Council is showing how a 21st-century urban center can govern with compassion and empathy.

Kochi, the name describes itself. A city of ports where the Dutch, Portuguese, Jews, and British have left their imprint is now governed by the Left Democratic Front and led by its mayor, Anil Kumar of the CPI(M). The city has a population of over 3.3 million and is spread over an area of over 95 square kilometres.

A recent visit to the city to meet the elected councillors belonging to the LDF brought in a new paradigm of a compassionate city. A city that has planned with modern tools of inclusivity carved out a new plan called ‘Samridhi’, which was championed by the elected council of the city.

It all started during the COVID period when there was a lockdown and the poor, particularly the daily wagers, were finding it difficult to sustain their livelihoods. Hence, the city council took a new initiative under the LDF. The city council started providing free meals to the needy and to those who lost their means of livelihood. The practice continued during the COVID days. And as the lockdown was lifted, it was felt that the free meal service of the municipality must stop.

However, the mayor and the city council thought otherwise. They initiated another scheme, called the Rs 10 Samridhi scheme, where a full meal is provided to the residents for the above price. It started with one meal, and now there are three meals-breakfast, lunch, and dinner being served under the Samridhi scheme.

The residents buy a single meal for Rs 10. Those who cannot even pay that amount are also given a meal. The meal provides rice, sambar, one vegetable, papad, and achar. There is no limit to eating, and the residents can have multiple refills. Then there is also a parcel service for those who wish to carry food to their homes.

There is also an add-on to the Rs 10 meal. Those who wish to have fish, chicken or beef can pay extra and have added items.

A day’s visit revealed everything. The poor were there; the middle-class sections were also there. On asking a young student why she was having a meal in a Rs 10 canteen, she said, “Firstly, the food is very good, very hygienic, and also full of variety.”

The entire cooking is done by the women’s self-help group, Kudumbshree. There are now nearly 48 women workers doing this work. The kitchen is very hygienic, and the staff was given training before the scheme was commissioned.

Along with the Samridhi meal scheme, the next project, which will be operational in a week, is “She Lodge,” within the same precincts. As the name suggests, “She Lodge” will allow women to find a place to stay in Kochi at very reasonable rates. The total cost/person is kept at Rs 100/day. The plan is to accommodate around 200 women in the lodge with all modern facilities and a meal of Rs 10. Those women visiting the city to take exams, appear in interviews or find other works can find a safe place to stay. There is a provision for both dormitories and cubical rooms for the women to stay in.

The Kochi municipality is doing all this under the LDF governance model.

The current urbanization model, an extension of the 1990s transformation of cities from ‘city manager’ to ‘city entrepreneurs’, has shown how perilous this whole idea is. The idea of treating cities as entrepreneurs and one city competing with another to attract investments for ameliorating their problems has fallen flat.

Various redevelopment projects from the JNNURM to AMRUT and finally to the SCM(Smart City Mission) are not in sync with the ground realities in the cities.

The plans made by these development authorities are a dictum on the people living in the cities. The basic ethos of these plans is to make cities financially sustainable by levying user charges; enhancing property tax collection; pushing for capital-intensive technologies in the making and running of utilities, thus passing on the burden on the common people, etc.

Take, for example, solid waste management in the cities. Something that can be done in a decentralized and democratic manner; instead, the Central government is pushing for more than 100 waste-to-energy plants run by private players. These private plants will either demand a tipping fee from the cities or seek a ‘buy back energy’ model; either way, this will burden the common people. In contrast, people have yet even to be considered for such technologies.

This contributes to the massive gap between the poor and the rich in urban centers. The shift from the conventional form of capitalist production systems to more information-based technologies and the informalisation of the urban economy is adding compounding problems. This is making large sections of the urban working populace poorer and further marginalized, who are losing control over basic assets like housing, etc.

The recent Oxfam report has also pointed out this gap in urban centers. The difference between the top 10% and bottom 10% asset holders is 500 times in rural India; this is 50,000 times in urban India.

In such a background, interventions like Rs 10 meal scheme or “She Lodge” by the Kochi municipality must be seen as a direction trying to restrict the trend of growing pauperization of the urban populace.

What India requires is not smart cities, guided by interests of large capital in the IoT (Internet of Things) field; India requires compassionate cities that can provide some basic facilities to its people, like water twice a day, proper social infrastructure, health, education, safe cities for women, children and the elderly; and liveable cities that generate employment and creativity.

This article was first published in News Click as Kerala: Kochi Paving the way for Compassionate Urban Governance on Nov 29, 2022.