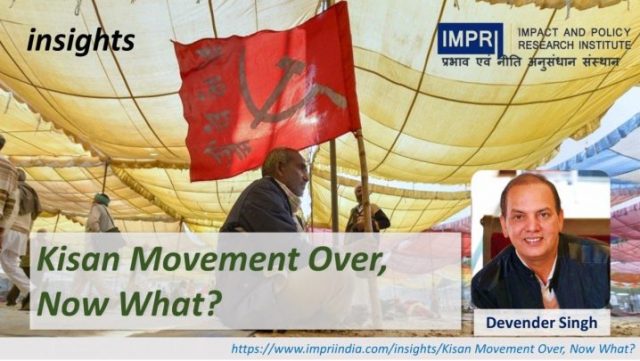 The government has taken back the three farm bills. The Repeal Act has been passed by the parliament. And, as demanded by the Samyukt Kisan Morcha, the umbrella front of 30 farmers’ organizations, the government has given in writing on their other demands as well. So now, when the farmers have won and have returned to their homes triumphant, what are the key takeaways from this more than a yearlong peaceful movement? Different people will draw different conclusions and learnings but I think the following five are the key takeaways that warrant acknowledgment and action;

First, there should be no doubt that it is a great victory for farmers because this government is considered ‘tough’ and not the one to go back on its decisions. Various national and international newspapers have called it ‘most significant concession made by this government’ (Ellis-Petersen 2021), ‘rare political retreat by the Prime Minister – his hand forced by the year-long farmers’ agitation’ (Ara 2021), and ‘climbdown on the farm laws represents the most significant political retreat by his government in its two terms, despite its crushing dominance in Parliament’ (Roy 2021). This is one of the most successful movements of people across the globe in recent times; a movement that lasted for 378 days, and in which, more than seven hundred kisans laid their life. A completely peaceful movement, where more than 1 million people participated on days of special mobilizations – one lakh tractors and one million people participated in the Tractor Rally on 26th January, India’s Republic Day.

Second, there is an urgent need to gain the trust of the farmers. The repeal of the three farm bills is the first step in this direction, not the end of it. The governments at the center and states need to do much more to make farmers feel wanted and respected and to show that government cares for them. The way the three bills were brought in hurriedly and without any consultations with states or farmers, first in the form of ordinances, and then as Acts through the parliament, again, with not much discussion and without agreeing to the opposition’s suggestions or demand to refer the bills to the concerned select committee of the parliament, made farmers suspicious of the intent behind the bills. This was done when the country was fighting with the COVID 19 pandemic and there was no immediate emergency-like situation in Indian agriculture to opt for an ordinance route.

Farmers felt cheated because farmers were hoping for a better deal. After all, they had played a crucial role in Mr. Modi’s electoral triumph in 2014 because, in the run-up to the 2014 parliamentary elections, he had promised to double their incomes in five years by offering minimum support prices (MSPs) for their produce (sold to the public food-procurement agency) that were 50% above total cultivation costs. The government sought to deal with the angry farmers much as it has done with all democratic protests. It initially ignored the demonstrators, before claiming that they were being misled and manipulated by opposition forces. The government then implied that the Sikh farmers were ‘anti-nationals’ and ‘terrorists’, and used brute force to quell peaceful protests. Pliant media and social media trolls were unleashed in an effort to undermine the farmers and discredit their demands.

Third, it needs to be recognized that farmers’ concerns are real; so many kisans, old and young, women and men, and children left their home and hearth behind, braved the smoldering heat, chilling cold, rains, and above all abominations and abuses, shows that farmers’ concerns are real and need recognition and action. Telling them that they do not know what is good for them, that they are being misled, that they are working against the interest of the nation do not help the cause of anyone – farmers, government and its acolytes, and the nation. Farmers perceived the bills an attack on farming culture and their livelihood. Land and agriculture ‘have not merely economic significance as a resource for survival and a political significance as the material basis for power; it also has a social basis as the person’s sense of belonging to a specific cultural community, and it establishes a cultural link to traditions, ethos and way of life’ (Pimple and Sethi 2005; pp. 253). hence, the protests were also about their survival, survival of kisani, farming culture and dignity.

Fourth, farmers and Indian agriculture need support. Over the years, outputs have gone down, inputs costs have gone up, vagaries of weather due to change in weather patterns -problems for farmers have been augmenting for some time. Better remunerative price of their crops is the starting point, not the end. Farmers’ need income support. Prime Minister Narendra Modi and the BJP had generated high hopes and got the support of farmers in 2014 elections by promising that the Swaminathan Commission recommendation of fixing MSP according to the formula C2+50% will be implemented once they come into power. The movement has also shown that this support should be in the form of public support and not privatization. This movement has been the strongest protest against the neo-liberal policies and corporate capture of state policy making.

Fifth, ecological concerns are for real. They need to be heeded by all stakeholders including kisans. Whether it is the monoculture of wheat and rice farming and resultant over-use of water or the degradation of land due to over- and misuse of too much chemicals – fertilizers and pesticides or pollution because of stubble burning – ecological concerns have to be taken into account in the agriculture policies and reforms. And they cannot be left to be dealt with only by farmers; adoption and transition to better ecological practices have to be supported by the State.

To conclude, it can be said that the kisan movement’s significance is wider. It goes beyond the immediate issue of the three farm bills. It has shown that corporate capture of the state and policy can be successfully thwarted. It also reinforces the notion that will of people is supreme, and provides hope to other groups such as Public Sector Units employees which are being privatized. In social terms also, it has brought people of different religions and castes closer as Roy (2020) writes, “the narrow social origins have since diffused to include support from such diverse social groups as the Dalit Army, the Zameen Prapti Sangharsh Samiti and the Khet Mazdoor Unions. Furthermore, the Hindu Jat farmers appear to be seeking reconciliation with their Muslim neighbours in western Uttar Pradesh, almost a decade after communal violence ripped the social fabric of that region’.

Read another piece by the author titled Haryana’s Big Stride in Sports in IMPRI insights.

Read another piece by the author titled 10 Sutras on World Population Day in IMPRI insights.

Devender Singh was with the United Nations Population Fund (UNFPA) from 2015 to 2021 where he worked on population and development issues. Currently, he is pursuing a programme in Global Studies at the University of Freiburg, Germany. He can be contacted at devchaudhury@gmail.com.