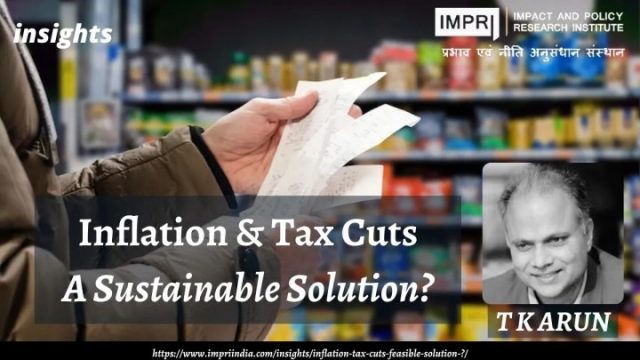 Now that the Union government has reduced its levies on petrofuels, are we out of the woods on inflation? The basic thing to understand about inflation is that it is a function of a whole lot of things other than taxes and subsidies, and that offering tax cuts and subsidies is more politics than economics.

India collects very little of the income generated every year as tax. Tax/GDP is about 17% of GDP for the Centre and the states combined, and about two-thirds of that comes as indirect taxes. The good thing about the new method of presenting our national income accounts is that there is transparency as to how much of our GDP is value added and how much, tax on goods and services, net of subsidy.

Some Love It Hot

Changing a rate of tax here, extending some subsidy there and restricting exports to enhance domestic availability — these serve to signal to voters that the government is at work. Containing inflation calls for macroeconomic management, with regulation of the supply of some key essentials playing a role in the short run.

Inflation can come from either excess demand or supply disruptions, or a combination of the two. The way to curb excess demand is to raise interest rates, for the non-government sector, and for the government to exercise fiscal restraint and not buy up more goods and services than the private sector could spare, just because the state can borrow at the cheapest rate in the economy.

Before turning to measures to tame inflation, let us understand that some influential people gain a lot from inflation that is elevated, but not yet out of control. Inflation is a boon for those who carry a large burden of debt.

The loan amount is fixed, and does not go up with the rate of inflation. As a proportion of their income, debt would come down, unless their income growth turns negative.

The government, of course, is the biggest beneficiary of inflation. Nominal GDP would grow faster than if inflation were tepid. As a proportion of GDP, the debt the government has to service would come down.

The other big beneficiary is industry with a high debt load and relatively steady demand for its output. Energy, whether transport fuels or electricity, face inelastic demand, apart from basic staples.

Inflation sorts people into two kinds: those whose incomes grow, along with inflation, and those whose incomes stay constant (or even disappear, as when their jobs and businesses fall prey to inflation). Organised sector workers see their income catch up with inflation, via things like dearness allowance or handsome raises and bonuses. Unorganised sector workers, and often, their employers, see their incomes stagnate.

When income lags the cost of things you consume, real consumption comes down. Another way of describing this is that there is a shift in the income distribution away from those whose incomes lag prices, towards those with pricing power. This is what justifies special taxes on windfall profits.

Inflation affects the exchange rate. The economy in which prices rise faster than in another will see its currency depreciate against the currency of the economy with lower erosion of purchasing power. Exchange rates are affected not just by inflation or interest rate differentials, but also by perceptions of relative risk and growth potential. Right now, the dollar has risen against practically all other currencies, so, even as the rupee has lost value against the dollar, its trade weighted exchange rate against a basket of currencies has declined less. But imports whose price is designated in dollars will see their rupee price go up. Inflation, in this manner, can reinforce itself via the exchange rate and the cost of imports.

Industry that has huge external borrowings has reason to fear inflation and depreciation of the currency. Their debt servicing burden in rupees would grow.

Inflation arising from supply disruptions should be allowed to feed through the system, to let people curb consumption and find substitutes. Only when the price rises of the first round begin to feed into a generalised cost increase should higher rates of interest curb demand.

Repressing fuel prices by forcing public sector oil marketing companies to sell below cost does threefold harm: it thwarts possible energy efficiency and demand reduction; it makes India look a bit like China, with private fuel retail business made to suffer on account of political expedience; and it eats into taxable profits.

The poor need growth, not just stable prices. So, in an economy like India’s, monetary and fiscal policy must maintain a fine balance between growth and inflation. Eating into taxable profits by curbing exports drains fiscal capacity and private investment, both vital for growth. Reducing indirect taxes also hurts fiscal firepower, but, at least, shores up real consumption. Subsuming fuel taxes into GST is the right step.

This article was first published in The Sanjaya Report as You cannot control inflation with tax cuts.

Read another piece by TK Arun on GST-The New Rule for GST by the Supreme Court? in IMPRI insights.

Read another piece by TK Arun on Davos The fall in Davos’ Relevance in Present times in IMPRI insights.