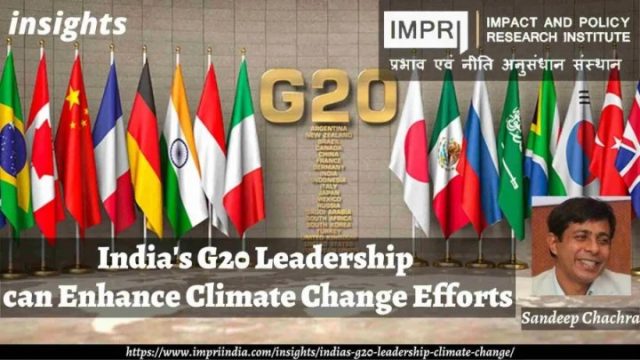 India’s proposal at the G20 presidency to phase out all fossil fuels, including gas and oil, sustainably and equitably construes the much-needed step away from planet-scale extinction of habitats and destruction of livelihoods.

The Presidency of G20 has shifted from Indonesia to India and will then go to Brazil, bringing an opportunity to a more inclusive world order. The G20 Presidency is supported by the troika consisting of the previous, current, and incoming Presidencies.

In the eyes of our world, the current combination of Global South countries—Indonesia, India, and Brazil—could energise a step towards a better world, even as pandemics, conflicts, economic shocks, and climate change push millions back into poverty and oppression.

Despite attempts to divide it, the recently-concluded COP27 at Sharm el Sheikh saw a unity of purpose by G77 + China. In this unity, the 134 developing economies pushed for a global loss and damage fund. While this is a landmark deal, we need much more progress in cutting fossil fuel emissions and rapidly ensuring progress on climate financing commitments. If advanced in a spirit of feminism and just transition, the next two years of the G20 with India and Brazil could offer a game-changing possibility.

At COP27, India advanced a bold proposition apart from its leadership and solidarity with the G77 + China proposals. Seen by some as a tactical gambit to negotiate against continued pressure on the Global South to phase out from coal earlier than committed, India’s proposal to phase out of all fossil fuels, including gas and oil, sustainably and equitably, actually construes the needed big step away from planet-scale extinction of habitats and destruction of livelihoods.

We must recognise that climate change most severely impacts the lives of indigenous peoples, women and majorities of our working peoples, who already face multiple precarity. Continued fossil fuel dependence risks gravely breaching the 1.5 degrees centigrade target. India’s narrative on sustainable lifestyle as an approach to tackle conspicuous consumption of the rich while ensuring justice also found its way into the implementation plan at COP 27.

Walking into ecstatic crowds at the UN Climate Summit singing his name, President-elect Lula da Silva of Brazil boldly promised to chase down climate criminals while pledging to protect Amazon and indigenous peoples and committing that Brazil would ensure the developing nations get what is “owed” to them to deal with climate.

With the recent positions taken by India and the commitments by Brazil, the incoming G20 President, hope is invoked, motoring popular expectations.

India’s G20 Presidency theme is ‘Vasudhaiva Kutumbakam’–‘One Earth, One Family, One Future’. A significant moral compass, as the very idea of a planetary family, invokes values of seeing humans as natural custodians of ecological resources and biodiversity, encouraging a critical engagement with indigenous knowledge and wisdom and investing Nature with rights, which are held by the communities who have done least damage to Mother Earth.

Speaking on December 10, 2022, on the occasion of Human Rights Day, Smt. Droupadi Murmu, President of India, noted, “Just as the concept of Human Rights exhorts the society to consider every human being as no different from us, we should treat the whole living world and its habitat with respect. We must learn to treat Nature with dignity”. Going further, the Indian President spoke of the right of rivers, invoking the rights of “mother nature indirectly”.

Perhaps aware of these wide-ranging expectations, India’s G20 Sherpa Shri Amitabh Kant opened the Sherpa track of G20, noting that the G20 Presidency for India “means that so far, we were getting agenda items from the developed world, we were reacting to them. This is the first time since Independence we can set our agenda.”

There is a lot on G20’s shoulders. It accounts for over 75% of the global GDP and trade and 80% of the world’s emissions. But, of course, the responsibility for emissions is disproportionately distributed among the Global North and Global South members, as is power. Thus, it is for the Global South members within G20 and, more particularly, the current troika supporting the G20 Presidency to herald a “just” way forward for all. For instance, thus far, the G20 have pledged climate action but made no significant commitments. Yet, from this body, our planet needs commitments and action.

There is a need for concrete pledges on climate financing and a calling to account for past failures to pay. Similarly, debt cancellation, not merely restructuring debt, needs to come back to the agenda of G20. According to IMF, 60% of low-income countries are at high risk of or already in debt distress. A growing number of middle-income countries are also suffering high debt service burdens, severely impeding their ability to respond to peoples’ suffering on account of climate impacts, as the case of flooding in Pakistan forcefully demonstrated.

In addition, more and more people are forced to seek refuge or migrate because of climate change. An ActionAid and Climate Action Network South Asia research report predicts that more than 62 million South Asian people will be forced to migrate from their homes due to climate disasters by 2050. The danger of vulnerable developing countries entering a vicious cycle of worsening climate vulnerability and unsustainable debt burdens is fast becoming a reality.

And that is where the challenge lies for those who have or will assume the leadership of a body like G20. How does G20 leadership propel agendas and actions from the vantage point of climate justice and the Global South enabling reparations for majorities of the working peoples of the Global South for the grave injustices of history?

How do agendas and agreements coming out of G20 escape the subterfuge of Greenwashing and market solutions which have proven only to benefit business owners? What accountable processes should we set up to bring the climate criminals to book? How can the ecological services of our peoples–including pastoralists, small-scale fisherfolk, waste pickers, forest dwellers, indigenous peoples, small farmers, and the landless–be recognised and celebrated?

In our quest for the common good of humankind, how do states ensure their obligation to respect and protect the environmental justice defenders who face continued dangers and sometimes even death for their tireless work of protecting the environment? And not least or last, how does such leadership set examples by putting in place frameworks, policies, programmes, and mechanisms in its own countries to ensure those who have contributed the least to climate distress and suffer the most impact and precarity are protected and compensated, even while mitigation and adaptation efforts unravel to their needed level.

Rhetoric needs tangible and urgent ground action. Legacies blossom when they make our world a better place for all and once the most vulnerable see them realised.

This article was first published in YourStory as How India’s G20 presidency can help fight climate change on December 15, 2022.