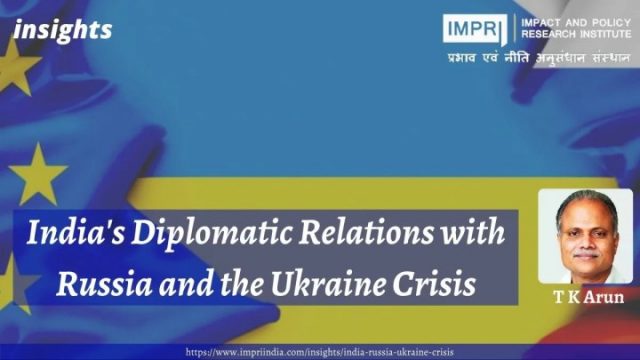 Where should India stand on the standoff between Russia and the Western allies over Ukraine? From the limited point of view of a sovereign nation’s right to choose its allies and military pacts, as well as to host foreign troops and arms, Russia’s demand for a Western guarantee against either Ukraine’s membership of the North Atlantic Treaty Organisation or deployment of Western arms or armament in Ukraine would, on the face of it, violate accepted global norms.

India is a traditional defender of national sovereignty, even against doctrines such as the global community’s ‘Responsibility to Protect’ persecuted minorities within national borders. That would mean that India should oppose Russia and endorse American and European demands for Russia to back off from whatever it means to do with its massive troop deployments along Ukraine’s border, in both Belarus and Russia. But that would be a mistake.

Back in 2014, when Russia annexed Crimea, to energetic and unanimous condemnation by the West, India recognized the annexed Crimean Peninsula as a part of Russia and abstained on a UN resolution upholding Ukrainian territorial integrity. The same reasons that persuaded India to overlook Ukrainian sovereignty and support the annexation of Crimea remain equally valid now.

India’s interest lies in a multipolar world, in which India itself would emerge as a pole of global power.

Since 2014, the world has evolved, to make China the principal challenger to American power, rather than Russia. Chinese universities publish more substantive research in science and technology with strategic implications than other non-American universities.

China’s hypersonic missile that orbits the earth, makes its re-entry into the atmosphere at a point far removed from where missile-detecting radars have traditionally been deployed and glide to its target faster than sound has been described by US officials as a near-Sputnik moment. The Sputnik moment refers, of course, to that significant event that shattered America’s smug confidence in its technological superiority over the Soviet Union, the launch of the first manmade satellite, Sputnik, by a Russian rocket, in 1957.

It may be worth noting that the Baikonur Cosmodrome, from which Sputnik had been launched and from which Russian spacecraft continue to be launched, is located in Kazakhstan. If Russia were to be stripped of access to facilities such as its naval base or cosmodrome or arms manufacturing facilities built during Soviet times and spread out across the vast expanse of the erstwhile Soviet Union, Russia’s status as the successor state to the Soviet Union would have no meaning.

So, even if we grant that Russia should have Crimea, why accept the demand that Ukraine should be out of NATO’s reach, that Ukraine should somehow be a no man’s land between the West and Russia? That is because major powers have always exercised their right to be secure in their neighborhood.

Remember the Cuban missile crisis, which took the world to the brink of nuclear war between the Soviet Union and the US? Cuba, a sovereign nation, had, after a foiled attempt backed by the US to invade and overthrow Cuba’s Fidel Castro regime, the so-called Bay of Pigs invasion, invited the Soviet Union to place some of its short and medium-range ballistic missiles in Cuba.

Here was one sovereign nation inviting another sovereign nation to deploy its wholly-owned weapons on its sovereign territory. Why should the US have been so excited, performed a naval blockade (officially designated a quarantine, to avoid a declaration of war), and readied its missiles in Turkey and Italy pointing towards the Soviet Union? Because Cuba is all of 140 km away from the Florida coast, virtually in America’s backyard.

If the world was willing to side with the US in its demand that the Russians remove from the American backyard their missiles and warplanes capable of dropping nuclear bombs on the US, why should the world not side with Russia now? Sovereignty alone is not what matters. The integrity of the world’s power structures matters as well.

When Gorbachev was trying to implement Glasnost and Perestroika, and reduce tensions with the West, NATO agreed to not expand eastwards. But then, the Soviet Union collapsed, and promises for NATO to not expand eastwards also collapsed, particularly with East European nations liberated from the Soviet yoke demanding membership of the defense alliance which accepts the Three Musketeers’ motto of ‘One for All and All for One’ — an attack on any member of the alliance would be deemed an attack on the entire alliance and the alliance, as a whole, would respond.

Putin has rhetorically asked if the Americans would allow Russian missiles to be deployed in Cuba or Venezuela today, based on the principle of national sovereignty, applying which to Ukraine, the West refuses to give the guarantee that it would not be given NATO membership. For the resolution of the Cuban missile crisis, President Kennedy dismantled American missiles stationed in Turkey, and covertly, those stationed in Italy as well.

If today, the West refuses to respect a buffer between Russia and NATO, it would only be because Russia is incomparably weaker vis-à-vis NATO than the Soviet Union was vis-à-vis the West in the Sixties. Why expect Russia to accept that without demur?

From the point of view of not just India, but of the entire world, it makes sense for Russia to remain a node of global power, balancing not just the US, but also, increasingly, China. A weakened Russia would be forced, given its posture of rivalry with the West, to play second fiddle to the West’s principal rival, China. For the sake of global multipolarity, Russia should remain a strong center of global power, minus a NATO deployment across its border.

India should support the cause of a multipolar world that prevents China from occupying the entirety of the space for a counterweight to the United States.

First published in The Federal Why India should support Russia in its standoff with the West over Ukraine on 23 January 2022.