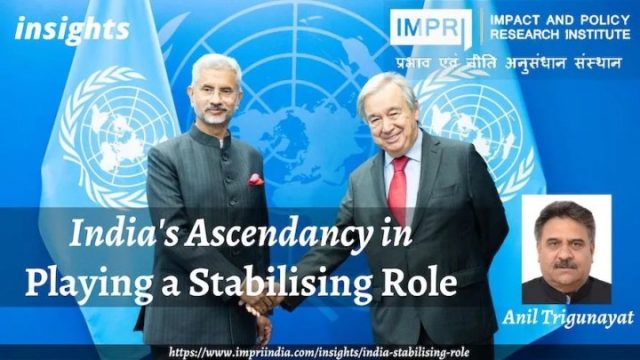 It appeared from media reports and commentaries as if India was the flavour at the 77th UNGA where India was ably represented by her Foreign Minister (EAM) Dr S Jaishankar. This is not a eulogy for the EAM but he is known to call a spade a spade which you could only do when you are convincing and represent a power that is taken seriously otherwise it becomes a rant of the disadvantaged.

Until December this year India will also be occupying a non-permanent seat where during its Presidency and tenure it has acquitted itself creditably through a proactive and principled approach be it on Afghanistan, Palestine, Libya, Yemen, Syria and other hotspots, Pandemic, Maritime security and international law, effective and efficient peacekeeping or for that matter on the ongoing Russia-Ukraine war or volatile situation in the Indo-Pacific and the Taiwan straits. This was clearly a reflection of New India’s robust and resilient foreign policy demarche.

One of the key demarches included the quest for a reformed multilateralism as India continues to reiterate, support and propagate the UN Charter and sovereignty and territorial integrity of all states that bigger powers take as a game to play around. In her over a dozen abstentions on the Russia-Ukraine crisis the focus has been to end the hostilities, protect human rights and provision of uninterrupted humanitarian assistance.

India has called out states sponsoring or shielding terrorists like Pakistan and China. It stuck to preference for dialogue over dispute while castigating and calling out, what is obviously wrong. India has always stood against the external military interventions and regime change agendas of the super powers, be it in Iraq, Libya or Russia-Ukraine war where continued devastation has become the norm.

India is the sole and sane voice in the international discourse as well as for the underdeveloped and developing world which are suffering the grave consequences of the war and pandemic on a daily basis. Indian Prime Minister spoke to President Putin and President Zelensky to cease hostilities and avoid nuclear and humanitarian catastrophe and return to dialogue and resolution of issues in accordance with international law while urging that the ‘Era of War is over’. India is ready to play its part in diffusing the crisis.

Of course, the critics and those blinded by alliance structures and mindsets would denigrate India’s sane voice falling on deaf ears on both sides of the spectrum which is ridden by myopic geo politics. Dr S Jaishankar has often called out the hypocrisy and double standards of several western countries time and again but clearly said at the UNGA as to on whose side India was, adding “And our answer, each time, is straight and honest. India is on the side of peace and will remain firmly there. We are on the side that respects the UN Charter and its founding principles. We are on the side that calls for dialogue and diplomacy as the only way out.”

This is why the Mexican President repeated his suggestion for forming a committee with PM Modi, Pope Francis and UNGA to mediate for permanent peace between Russia and Ukraine. It is not something that happens every day.

War is not an option but prompting escalation is a norm by super powers. Unilateralism is becoming an increasingly dangerous dimension and currency of the debilitating and transitioning global order. Might is right in which the UN becomes a mere talking shop and UNSC a blunted tool by the P5 which has been its biggest bane. If recourse to UNGA is becoming frequent why not give adequate teeth to its resolutions which should become binding irrespective of the P5 opinions orvetoes. Hence UN reforms are a must if the organization has to remain effective or functional.

India has stopped demanding for a seat on the expanded UNSC but it has begun to claim it is a matter of right due to its undisputed credentials of being the largest democracy, 2nd largest population, one of the top five economies and markets, fastest growing economy and contributions to the peacekeeping and above all its policy and principles of ‘Vasudhaiv Kutumbakam’ and ‘Vaccine Maitri’ that were so evident.

No wonder more than a dozen Heads of State remarked about India’s yeoman effort and assistance during the pandemic at the UNGA. India @ 75 is ready to take the leap of faith to become a developed and advanced economy that is based on reality and reservoir of her untapped potential for larger good.

One of the major challenges facing the world is of climate change or degradation when our very existence is threatened. With 1/6th of the world population India is not only concerned but committed in action to reduce and mitigate the adverse impact. Minister Jaishankar was categorical while referring to the exemplary work by the ISA (International Solar Alliance) with ‘One Sun – One earth’ principle laid down by PM Modi, he reiterated “Climate action and climate justice are particularly noteworthy in this respect. In their pursuit, India has worked with partners on the International Solar Alliance, the One Sun-One World-One Grid initiative and the Coalition for Disaster Resilient Infrastructure.

We stand ready to support any collective and equitable endeavour to protect our environment and to further global wellness. “Lifestyle for Environment” or LiFE, as declared by Prime Minister Narendra Modi in Glasgow on the side-lines of COP26 is our homage to Mother Nature.

India remains deeply committed to fighting climate change under the UNFCCC (United Nations Framework Convention on Climate Change) and the Paris Agreement with focus on green growth. We do so on the principle of common but differentiated responsibilities and respective capabilities, in the light of different national circumstances. We have announced our updated Nationally Determined Contributions after COP26, he added.

As India takes over the G20 Presidency it is committed to advance the cause of the poor and indebted countries. While obliquely referring to the debt trap of some Dr Jaishankar outlined “we are sensitive to the challenges faced by developing countries. India will work with other G-20 members to address serious issues of debt, of economic growth, food and energy security and particularly, of environment. The reform of governance of multilateral financial institutions will continue to be one of our core priorities.” Hopefully, Africa through African Union will become a member of the G20 during India’s presidency.

During his over 100 interactions with key international leaders, interlocutors and his counterparts Dr Jaishankar was able to confer and convey the prevailing international concerns and what India can offer as a responsible and founding member of the UN and most of the international organisations. He also attended meetings of the L 69, G 4, G 20, India- CELAC, CARICOM, QUAD, IBSA and BRICS ministerial as well as trilaterals like France -India-UAE, India France Australia and India Australia and Indonesia among others on the side-lines of the UNGA thereby keeping the multi-alignment policy with reformed multilateralism at its core while securing and according primacy to India’s national interests.

In sum and substance, EAM conveyed convincingly that in these turbulent times, it is essential that the world listens to more voices of reason stating “we have a very worried international community”. He, however, said India can play a stabilizing role. He also said India can help depolarise the world. World needs to experience more acts of goodwill. India is willing and able to assist on all counts which, he assured the international community.
And this is the India way.

India’s Statement delivered by the External Affairs Minister, Dr. S. Jaishankar at the General Debate of the 77th session of the UN General Assembly (mea.gov.in)