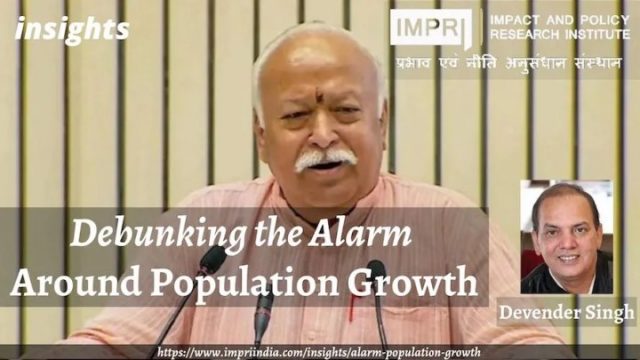 The chorus around India’s population growth refuses to die down. In his address on the occasion of Dussehra on October 5, Rashtriya Swayamsevak Sangh (RSS) chief Mohan Bhagwat raised the issue of population growth, its religious ‘imbalance’ and the need for a population policy. He said, “Population control and religion-based population balance is an important subject that can no longer be ignored.”

Owing to his stature in the Sangh Parivar and the importance of the annual Dussehra addresses, especially among RSS members and followers, it seems imminent that several others will join the chorus.

But any alarm around population growth and the need to control India’s population ought to be seen as disingenuous and immediately repudiated. This is because India has consistently been on the path of decreasing fertility and declining population growth for four decades now. It is in fact safe to say that India has entered the low fertility stage. The total fertility rate (TFR), per the National Family Health Survey (NFHS) 5, has come down to 2 – a notch below the replacement level fertility rate of 2.1.

The TFR is defined as the number of children each woman will give birth to if she lived to the end of her child-bearing years and in line with prevailing age-specific fertility rate.

Barring four states (Bihar, Meghalaya, Uttar Pradesh and Jharkhand), all Indian states have TFR lower than 2.1. This decline has followed a secular trend: the TFR has been consistently declining across the religious spectrum, including among Muslims.

Also important is that the desired TFR in India is now at a low of 1.6, and 1.8 for Muslims, indicating that most families want fewer children than they’re having right now.

This is an indication of a gap in the need for and supply of family-planning methods – a paradigmatic shift that requires correct understanding and appropriate policy refocusing. Herein lies the first key opportunity to consolidate our gains on the family-planning front by reaching out to hitherto unreached areas and people with appropriate methods and counselling to address their unmet needs.

Opportunities of the Growth

Another potentially transformative opportunity lies in the makeup of our population. While the population in most countries is decreasing, India’s population is and will be increasing in the years to come, and most of this increase will be in the young and working-age populations. India, with a median age of 28.7 years, is a young country with a potential demographic dividend, an opportunity that will last from 2005 to 2055, with the ‘working age ratio’ being highest from 2021 to 2041.

How well we prepare to harness it, by investing in education, health and skill development, and how many employment opportunities we can create for our young people will decide whether we benefit from it or allow it to backfire. Over the years, the talk on India’s possible demographic dividend has been dwindling, which is understandable because these conversations lead one to the topic of employment, especially among the young, among whom the unemployment rate is at an all-time high.

It is not that the government, the Bharatiya Janata Party or the RSS are unaware of the situation. Dattatreya Hosabale, the RSS general secretary and the second-in-command in the RSS hierarchy, spoke of high unemployment at a programme of the Swadeshi Jagran Manch on October 3.

Along with the opportunities, there will be challenges too. The first and foremost challenge is demographic diversity. Simply put, India encompasses three major demographic groups: five states have TFR comparable to the least developed countries (above 2.1), 17 states have TFR equal to or lower than 1.7; and the remainder have a TFR between 1.8 and 2.0.

Because of these differential TFRs, there will be a surplus of young and ‘looking for work’ population in one part of India and an ageing population in other parts. For example, per population projections of the National Commission on Population, 55% of the population growth in India between 2011 and 2036, will occur in Bihar, Madhya Pradesh, Maharashtra, Uttar Pradesh and West Bengal.

Lopsided population growth across states and geographical regions plus skewed economic development will give a fillip to another challenge: the migration of young people from the north-central states to the states in western and southern India. The north-central region will have a surplus young working-age population while the south will require younger people to keep its wheels turning, maintain economic productivity and care for the elderly.

Yet another challenge will be the ageing scenario. India is fast ageing into a big senior citizens’ society. From the 104 million older persons (60 years and above) in 2011, there will be 425 million in India by 2061, per population projections by the UN Population Fund – a more than a four-fold increase. Every fourth person in India in 2061 will be 60+. Another way to look at this is that India will be an old country before becoming a rich country.

Of course, the differential population growth will also entail social, cultural, economic and political tensions between states. So instead of raising the meaningless spectre of population growth, imbalance and control time and again, we need to focus on the demographic opportunities and challenges ahead for India.

This article was also published at The Wire as “Let Us Bury the Ghost of Population Growth Once and for All” on October 7, 2022

Also read more articles by the Author on IMPRI Insights

Watch IMPRI #WebPolicy Talk The State of Population and Development – #PopulationAndDevelopment | Panel Discussion on India@75: Most Populous and?