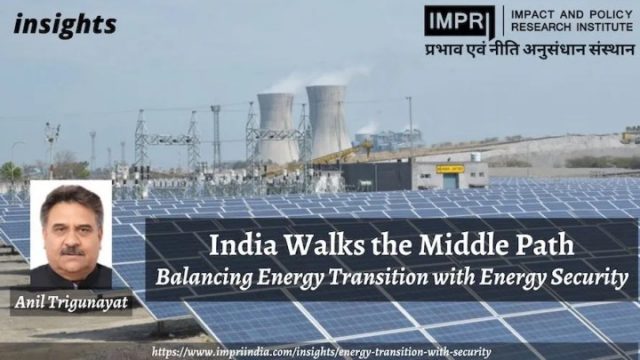 COP27 in Sharm al Sheikh is fast approaching. It has been a year since the world set various ambitious climate targets at Glasgow, and planned for a transition to renewables. At the time, India had been criticised by some in the West for being too cautious, too slow, and focusing too much on investment in hydrocarbons.

Now, it is fair to say that the world has come round to India’s point of view. Market volatility, and a global supply glut, have meant that the investment flagged and sought by the Modi government is seen as a wise step in securing India’s energy transition without compromising its security. But India can not rest on its laurels, our partners are as much a model for our future as we are for them.

The crisis in Ukraine revealed deep flaws in the global energy system. Sustained underinvestment in hydrocarbon production, and the overreliance of some markets on one source of supply, left the industry and consumers vulnerable to shifts in demand. For many industry observers, it was clear that some governments had spent so long thinking about the next twenty years, that they had neglected to think about the next two.

25% of the growth in global energy demand over the next twenty years is going to come from India. That makes India’s energy future the world’s energy future, and gives us a responsibility to make sure that we are benefiting from the best ideas. Many of the large hydrocarbon producing nations, such as Australia, US, and the UAE, have stepped into the recent gap in the global market and combined offerings of sustained gas with agreements over renewable energy. It is a given that, the two will go hand in hand if nations intend to balance energy security, and energy equity, with long-term climate goals.

India is already leading the pack, with plans to increase the role of gas in our energy mix from 6% to 15%, and earlier this month, started bidding for the 26 oil and gas blocks and 16 coal bed methane blocks to meet the unprecedented global interest in Indian exploration.

Meanwhile, we are also boosting renewables. Last year we signed a green partnership with the US, and announcements in the private sector from players such as Mukesh Ambani show there is appetite for India to become a credible alternative to China in green energy production. Only recently Indian and Egyptian firms signed $8bn Hydrogen energy deal. Denmark , Sweden and France are other credible partners as are some in the Middle East and Gulf. India needs it all in order to reduce dependencies on traditional hydrocarbons where decarbonisation has become an instant requirement.

Balancing these two means looking to partners like Australia and the UAE, who, though they have considerably smaller populations, have succeeded in placing themselves at the centre of global gas production, with an eye on being at the centre of the future of renewables.

Australia is already one of the three largest LNG exporters in the world (behind the US and Qatar), but it has balanced this with investment in projects like The Asian Renewable Energy Hub, a solar, wind, and hydrogen project which has received significant backing from major firms like BP. One of the largest renewable projects in the world, it has the potential to help nations like Japan and South Korea meet their decarbonisation goals. The AREH is precisely the kind of project India should be looking to house, on a much larger scale, for domestic needs.

Meanwhile, in the Gulf, the UAE has played a leading role supporting Europe’s natural gas requirements (see the Germany-LNG deal last month), while also setting up long-term deals around blue hydrogen. Spearheaded by ADNOC and MASDAR, the UAE has combined investment in projects like the Mohammed bin Rashid Al Maktoum Solar Park, one of the world’s largest solar grids, with the creation of a new Fujairah LNG facility, which will double the UAE’s export capacity to 9.6m tonnes per year.

Hydrocarbon investment does not mean undercutting transition goals. Where India has utilised biofuels as a feedstock to drive down emissions and has exceeded its own targets of 10 % mix before time while launching the 20% mix by 2030, the UAE has led the way in cutting down methane emissions in its plants, and utilising its Barakah nuclear power plant to decarbonise refining. The UAE is a model for this approach, and the trade agreement signed with India earlier this year affords plenty of opportunity to share learnings and explore routes for collaboration.

As the UAE’s Minister of Industry and Advanced Technology, and Group CEO of ADNOC, Dr Sultan Al Jaber, said earlier this year, ‘We have a responsibility to the billions of people of the world to ensure they have access to energy’.

Over the last year India’s doubters have been proven wrong, the world needs to balance security with transition, hydrocarbons with renewables. Many of our partners are now making the right steps, they have as much to teach us, as we have to them. Two can tango for the mutual benefit and for the larger universal goal.

This article was also published at The Economic Times as What India can learn from partners on balancing energy security with transition on October 23, 2022