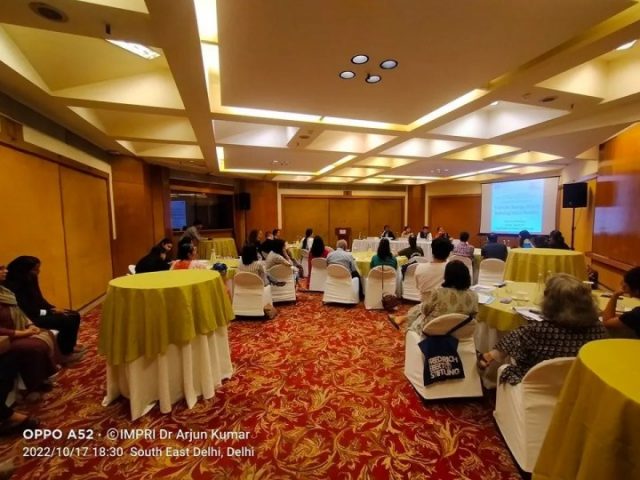 A consultative workshop was organized by IMPRI Impact and Policy Research Institute in collaboration with Friedrich-Ebert-Stiftung (FES), India Office on Feminist Foreign Policy (FFP): Exploring India’s Position at the India Habitat Centre, New Delhi on October 17, 2022. The workshop began with Dr Simi Mehta giving a brief background of the event, the theme, and the experts for the event. She mentioned that FFP is gaining ground as a result of peacebuilding and peacemaking measures around the world by transnational feminist solidarity.

She also included that the concept of FFP provides a robust framework to understand the power mechanism in the current global order. She then opened the floor for expert speakers while setting the agenda of the workshop by placing key aspects of the discussion into which the experts would delve. It included but was not limited to: the core concept of FFP, how inclusive FFP is, women’s role in Indian politics, countering gender-based violence and discrimination, United Nations (UN) Resolution 1325, etc. She also pointed to the Online Monsoon School Program on FFP, organized in the month of September 2022, where the deliberations around gender and international relations were held.

She invited the Deputy Director of FES India, Mr Richard Kaniewski, for opening remarks wherein he initiated by citing the example of Sweden as a front-runner in the formulation, establishment and practice of the FFP. He rationalized the workshop by reasoning that this approach highlights the values of women’s rights and gender equality as a central tenet of policy along with focusing on the structure of internal relations and diplomacy itself. He further elucidated that recent international dynamics enliven states like Germany which have inclined their foreign policy to be broadly based on feminist concepts, especially in the wake of the Ukraine war.

He contended that defining certain characteristics of behaviour according to special gender would produce stereotypes that are not very fruitful towards achieving gender equality, gender justice, as well as women’s rights in all parts of society. He advocated for leadership positions and roles for women in businesses, academics, administration and also in the international context. He further mentioned the four core ideas and values of democracy, elucidated by Germany’s first democratic leader, are-  Freedom, Solidarity, Peace and Social Justice- underpinned by gender equality as one of the keystones to fulfilling these values. He ended his remarks by quoting the father of the German social democratic movement, “There is no liberation of humanity without social independence and gender equality”.

Prof KP Vijayalakshmi began by drawing attention to the conventional warfare and catastrophes that are back while indicating the war in Ukraine. Every government is blaming the whole world for the calamities, conflicts and trade that are affected by global headwinds. Prof Vijayalakshmi has been involved in promoting women’s participation at every level and believes that mainstreaming gender and decision-making is the only reason she undertook the task. She iterated that women are highly active in political systems, like exercising their voting rights, demanding political space and even in foreign policy or transnational politics, but remarked that the return of conventional warfare has severe consequences for them and their children.

She mentioned the concept of Women, Peace and Security (WPS) as part of the broader FFP framework and UN resolution 1325 which demanded more inclusive civil society groups and organisations at the global level for women. She elucidated three core pillars of inclusion of women – first, several reports of  Inter-Parliamentary Units (IPUs) mentioned that women are marginalised in politics and/or less represented but this is not because of less participation of women; second, employing the multi-stakeholder approach has resulted in the growth of women and people from marginalised sections. But she questioned the qualitative change i.e., giving women responsible positions, like leading the peace delegation or defining the terms of the peace agreement.

She also iterated the binaries that undergird or contextualise women’s role in politics. She explained that equitable and intersectional societies will produce better and healthier societies for humans which social and economic indicators which would reduce the conflicts in the world. In describing the binary of women being mere participants and not changemakers, she mentioned that “the uterus demands a lot of responsibilities and every woman has one”. Third, FFP takes the bottoms-up approach and includes not only women’s rights but also advocates for other vulnerable sections of society. She ended by saying that managing conflicts is not enough, resolving them becomes the impact of FFP and calling out multilateral institutions to continue their advocacy for the agency of women to bring the FFP core values into society.

Ambassador Partha Ray negated the idea of FFP as a transatlantic concept and iterated that it took several years for western countries to institutionalise the Universal Adult Franchise since they democratise the government, he cited the example of France but India and Israel were only two countries which provided through constitution the Right to Vote for women as soon they declared independence. He shared anecdotes from his distinguished career as an ambassador.

Ms Prerna Singh discussed her experience as a citizens’ representative from North Municipal Corporation of Delhi (MCD) from the Indian National Congress (INC) for over 10 years. She told that despite fifty per cent of seats being reserved for women at the municipal level, women’s participation is still low due to leadership positions being desirable for men; one of the binaries as a stereotype elucidated from her own experiences. She criticised the social setup that discourages and restricts women from participating in the political process by citing the binaries existing in society. For example, women are weak due to their biological ability to conceive and the social environment doesn’t allow women to work during pregnancy reimposing the binary.

The workshop concluded with a few participants asking pertinent questions from our panel of experts. This was followed by Dr Simi Mehta delivering a vote of thanks to all the experts and the attendees.