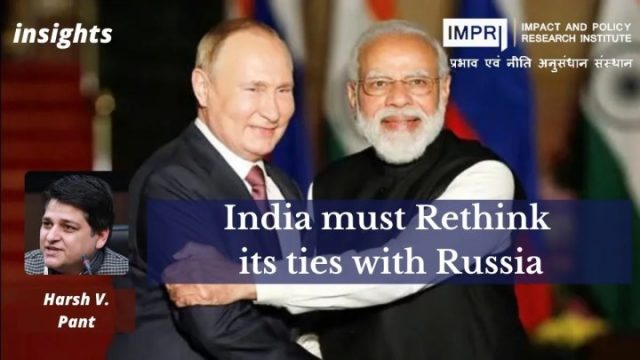 Through its actions in Ukraine, Russia has challenged the global order in fundamental ways and India’s foreign policy won’t be immune from its reverberations

As the Russian invasion unfolds in Ukraine with dramatic alacrity, most Indians seem to be united in their condemnation of, no, not Russia, but the West. In one of the most brazen violations of a weak State’s sovereignty and territorial integrity in recent memory, a big section of the Indian intelligentsia is tying itself up in knots in trying to defend the indefensible. Knowing full well who the aggressor is in this case, we continue to target the West, the North Atlantic Treaty Organization (NATO) and, worse still, even blame the victim.

It is Ukraine, some strategic experts tell us, that is at fault in trying to be a sovereign State, in overreaching its right in deciding for itself where its interests lie. If only Ukraine could have compromised, nothing would have happened. It is Ukraine that should have realised its place in the regional hierarchy and played along with Russia, instead of dreaming of becoming an independent State.

And then, of course, there is the West with all its talk of democracy and autonomy that continues to entice nations and is responsible for this mess in Europe, the worst crisis since World War II. Across the political spectrum, there is a unique convergence in India in refusing to condemn Russia for this bizarre show of strength.

If this were the United States (US) attacking any other nation like this, sections of our political class would be out on the streets, demanding India cut off ties with the US, and organizations big and small would be burning American flags. But an eerie silence pervades India even as we witness one of the most egregious violations of State sovereignty in recent times. Instead, we are trying, oh so very hard, to justify Russian actions.

Across the political spectrum, there is a unique convergence in India in refusing to condemn Russia for this bizarre show of strength. If this were the United States (US) attacking any other nation like this, sections of our political class would be out on the streets, demanding India cut off ties with the US and organisations big and small would be burning American flags.

The Indian government’s reaction is understandable to a certain extent. In his outreach to Russian President Vladimir Putin, Prime Minister Narendra Modi appealed for an immediate cessation of violence and called for concerted efforts from all sides to return to the path of diplomatic negotiations and dialogue. New Delhi’s primary concern is the safety and security of its citizens in Ukraine and the impact of the crisis on the global economy that is just about beginning to recover from the Covid-19 pandemic.

Diplomatically, India has to weigh the balance between its ties with the West and those with Russia. The latter is India’s primary defense partner and at a time when Indian soldiers are eyeball to eyeball with their Chinese counterparts at several points along the Line of Actual Control (LAC), antagonizing Russia is not really an option. New Delhi, therefore, has to tread a cautious path and that’s what it seems to be doing at the moment.

But it’s the non-governmental reaction in India that’s befuddling to say the least. Ukraine is being sacrificed at the altar of great power politics and yet there seems little sympathy for it. There is a lot of blame that can be apportioned to various actors – the way NATO expanded after the end of the Cold War without taking into account Russian sensitivities and its long-term consequences;

the way Ukraine was mismanaged over the years and its foreign policy was bereft of any sense of direction; the manner in which the Biden administration conveyed its priorities; and the divisions within the European Union on its future course of action vis-à-vis the Russian show of strength in Ukraine. But none of this takes away from the basic reality that Russia’s invasion of Ukraine has no leg to stand on.

Russia’s violation of Ukrainian sovereignty should be an issue of principles for India, which has supported the norm of sovereignty globally. New Delhi will find it difficult to talk of a “rules-based” order in the Indo-Pacific if it is unwilling to stand up for the same principles elsewhere.

The fact that the West was lackadaisical in the application of this principle universally doesn’t make this issue any less germane for India. However, it can be argued, and rightly so, that morality has little place in the rough and tumble world of global power politics. And so, it is at the strategic level that India should start reassessing the impact of the Ukraine crisis on its foreign policy trajectory.

The fact that the West was lackadaisical in the application of this principle universally doesn’t make this issue any less germane for India.

This crisis and the Western response will have a significant bearing on the strategic environment in the Indo-Pacific, a theatre that India claims is different from the European one. But China is watching carefully and planning accordingly.

The China-Russia entente is blossoming into a full-fledged strategic partnership. Many in India may not like this, but it is happening and after the Ukraine invasion, Vladimir Putin’s need for Xi Jinping’s support is only going to grow manifold.

Despite India’s historic ties with Russia, Moscow has been more vocal than even China in showcasing its opposition to the Indo-Pacific construct and the Quad platform. Russia has even begun to flirt with Pakistan.

India has been trying its best to keep Russia in good humor but the structural realities of the global order are ensuring that Russia and India are drifting apart. The foundations of the partnership are weakening by the day. The long-term trajectory is rather clear. Russia was important to India at a certain time in its history and there are still areas of convergence between the two.

But that convergence is shrinking whereas the partnership with the West is burgeoning. Today as Russia continues to play the role of the great disruptor, India should be thinking about reconfiguring its ties with Russia. Perhaps if India were not so dependent on Russia for its defense needs, New Delhi’s response to the present crisis would have been different.

Russia has challenged the extant global order in fundamental ways and Indian foreign policy won’t remain immune from its reverberations, howsoever hard we may try to convince ourselves that everyone, except Russia, is responsible for the unfolding crisis in Ukraine.