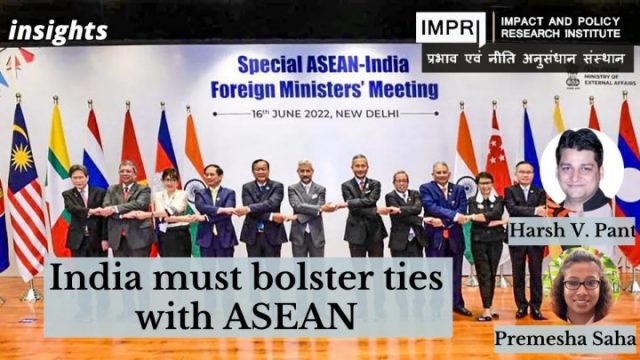 India’s ‘Act East’ policy is a core tenet of its Indo-Pacific vision. This was underlined at the special Association of Southeast Asian Nations (Asean)-India foreign ministers’ meet hosted by New Delhi on June 16 to mark the 30th anniversary of India’s ties with Asean.

In his keynote speech at the security conference, Shangri-La Dialogue, in 2018 in Singapore, Narendra Modi had stressed on Asean’s centrality and unity ‘at the heart of the new Indo-Pacific’. When India launched the Indo-Pacific Oceans’ Initiative at the 2019 East Asia Summit in Bangkok, Thailand, countries like Indonesia, Singapore and Vietnam also became India’s partners in this initiative.

Asean, in trying to balance relations between US and China, is also making an effort to engage with other potential like-minded partners in the Indo-Pacific. The strengthening of relations in the geopolitical sphere has also given a push to the IndiaAsean economic ties, with Asean now India’s fourth-largest trading partner engaging in bilateral trade in 2019-20 worth $86.9 billion. India already has a free trade agreement (FTA) with Asean, spanning goods, services and investment.

The strengthening of relations in the geopolitical sphere has also given a push to the India-Asean economic ties, with Asean now India’s fourth-largest trading partner engaging in bilateral trade in 2019-20 worth $86.9 billion.

These ties took a hit when India walked out of the China-inclusive Regional Comprehensive Economic Partnership (RCEP) in November 2019. Though many have argued that RCEP is a China-centric economic framework, the Asean countries believe it to be an Asean-led mechanism. So, when India decided not to be a part of this initiative, IndiaAsean relations were hit.

India already has FTAs with 13 of Asean’s 15 members. India now has to actively engage with the grouping in trade and investment so as to ensure that it considers this region as a potential economic partner, and that New Delhi’s decision to pull out of RCEP was based on the singular fact that the latter was not meeting the objectives India hoped for.

The Indo-Pacific Economic Framework (IPEF) has four pillars: trade; supply chains; clean energy, decarbonisation and infrastructure; and tax and anti-corruption. Barring Cambodia, Laos and Myanmar, other Southeast Asian nations are part of IPEF. With this initiative launched on the sidelines of a Quad summit, most Asean countries agreed to be a part of IPEF, notwithstanding their concerns that mechanisms like the Quad may impinge on Asean centrality. This presents another opportunity for India, alongside Quad member-countries, to work with the Asean countries towards establishing sustainable and diversified supply chain networks from an overly China-dominated one.

The Joe Biden administration defines the IPEF as ‘a 21st-century economic arrangement designed to tackle 21st-century economic challenges, ranging from setting the rules of the road for the digital economy; to ensuring secure and resilient supply chains; to helping make the kind of major investments necessary in clean energy infrastructure and the clean energy transition; to raising standards for transparency, fair taxation and anti-corruption’.

These are, indeed, the main challenges engulfing the Indo-Pacific. But it is too early to assess how successful IPEF as an alternative would be. Unless concrete steps like providing greater market access are taken to make it an attractive proposition to member-countries, it may just remain one of the many initiatives simply given a name by the US. So, India needs to continue its engagement both with Asean and individual membercountries on a bilateral basis.

This article was first published in The Economic Times as Why engagement with ASEAN should be high on the priority list for India on 20 June 2022.