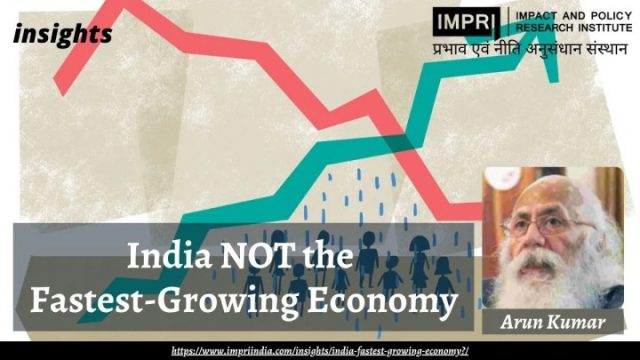 This picture implies almost no growth and high inflation since the pre-pandemic year. So, the tag of the fastest growing economy means little. If an economy drops sharply and then rises equally fast to reach its earlier level, that cannot be taken as an indication of a rapidly growing economy.

True, the last quarter (January-March 2022) data was impacted by the Omicron-related lockdowns in January and February. It was further impacted in March by the supply disruptions following the war in Ukraine and the severe COVID-19 lockdown in China. Going forward, while the lockdown in China is over, the war-related impact is likely to persist since there is no end in sight. Thus, price rise and impact on production are likely to persist. The rapid rise in prices will impact demand from the vast majority of citizens who are losing out. That will reduce growth further.

Data as the problem

More worryingly, the issue is about correctness of data. The annual estimates given now are provisional since complete data are not available for 2021-22. They may be better than the second advance estimates released three months ago as more data become available. There is a greater problem with quarterly estimates since very limited data are available for estimating it. So, the data for the fourth quarter of 2021-22 released now is even more problematic

The first issue is that during 2020-21, due to the pandemic, full data could not be collected for Q1. Further, for agriculture, quarterly data assumes that the targets are achieved. But in Q1, a lot of fruits, vegetables, flowers, milk and poultry products could not come to the market, and rotted and wasted. This is more than 50% of the agriculture output. Thus, the growth rate of agriculture was certainly less than the official figure of 3%.

For instance, Goods and Services Tax (GST) collection data are used. But, it is well known that GST is collected almost entirely from the organised sector. In brief: very little data are available for quarterly estimates; and even less is available for the unorganised sector. Since the same method is used to estimate the annual growth rate the errors get repeated.

If better data became available after the shock of the lockdown, and it got used, there should be substantial revision in the previous year’s quarterly data. But if one compares the Q1 2020-21 data in the latest release with the data released in May 2021, the change is 0.3%. Does this imply that the high frequency data used is very well able to predict quarterly GDP? This is unlikely to be the case when a shock is administered to the economy which changes the parameters of the economy. The data remaining largely unchanged implies that the same error is being carried forward.

If GDP data are incorrect, data on its components — private consumption and investment — must also be incorrect. Most often, ratios are applied to the GDP to estimate them. But, if the GDP is in error, then the ratios will yield erroneous results. The other main components — government and external trade — may be assumed to be reasonably accurate even though this data is revised over several years.

Further, the ratios themselves would have been impacted by the shock of the lockdown and the decline of the unorganised sectors. Additionally, private consumption data is suspect since according to the data given by the Reserve Bank of India which largely captures the organised sector, consumer confidence throughout 2021-22 was way below (not marginally lower) its pre-pandemic level of 104 achieved in January 2020. So, consumption could not have come close to its pre-pandemic level.

In brief, neither the total nor the ratios are correct. Clearly, consumption and investment figures are over-estimates and very likely because the decline in the unorganised sectors has not been captured.

Read another piece by Dr Arun Kumar on the Aryan Khan Drugs case- The Slackness in India’s Justice System in IMPRI insights.

Read another piece by Dr Arun Kumar on Stagflation- Economy in Stagflation in IMPRI insights.