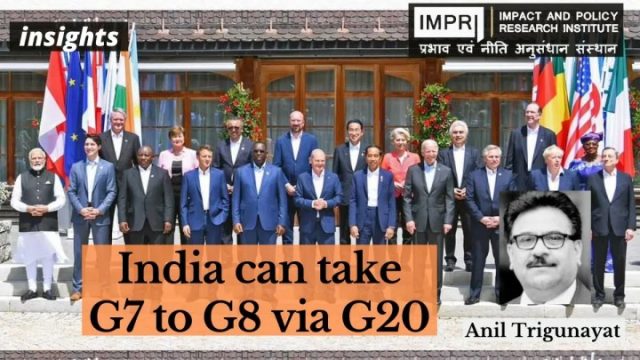 The G7 Summit (June 26-28), in Schloss Elmau in the beautiful Bavarian Alps, sadly may not rise to the German Presidency’s goal and theme of ‘Progress Towards an Equitable world’. German Chancellor Olaf Scholz would prefer to focus on other major global challenges and it not to be hijacked by the ongoing Russia-Ukraine war which is very much on the agenda. But, it is being held under the shadow of devastating impacts of the Corona Pandemic and the Russia-Ukraine war with Europeans on the economic edge, hence his hopes may be belied through only proforma discussions. Comrade Zelensky is the real theme at least for the US as the White House Fact Sheet reads.

G7 countries including Canada, France, Germany, Italy, Japan, the UK and the US, which are the most developed and powerful by any standards, were not able to rise against the pandemic as expected be it the fight against the virus or handling it or for that matter creating vaccine equity and access to the poorer world that is the remaining 90 percent of the population. No wonder the South African President accused the developed world of indulging in ‘Vaccine Apartheid’.

Acrimony at the recent WTO and in the aftermath of India and South Africa’s proposal for an IPR waiver of the vaccines is a testament to continued apathy even as the world is facing its real geopolitical moment when adversarial positions would further compound the crisis. The food and energy crisis has compounded the health crisis even more in the wake of the war.

Hence expeditious energy transition, ensuring food security, accelerating economic stability and prevention against pandemics and defying the climate change will remain priorities while strategising over the earlier commitments like Build Back better to Global gateway Initiative with $600 billion commitments to counter Chinese BRI and containing the fall out of Russian misadventure would keep the leaders on the toes. Hopefully, some sanity will prevail to find ways to cut the losses by helping stop the war at the earliest.

The weaponisation of financial instruments and crippling unprecedented sanctions by the West against the Russian invasion of Ukraine and the catastrophe it has caused through a consequent weaponisation of energy and food are challenges enough for an economically stressed G7 and if you add the erstwhile G8 in Russia the world is in a spin and there is none to stabilise it nor there seems to be a desire to get down the high horse of arrogance on either side. In situations like this, the powers see through a coloured prism that only makes them myopic.

If the trail of meetings like the ‘United for Food Security’ followed by NATO meet and acidic statements are to be gone by, one could expect more sanctions (but how to avoid the self-defeating impact) and more confrontation and further plight for the global south as the unbridgeable split between the two sides widens.

Following the virtual BRICS summit under the Chinese Chairmanship, Indian Prime Minister Narendra Modi heads to Germany ( his second visit in less than two months) where he will be meeting some G7 leaders and invited guest democracies of Indonesia, South Africa, Argentina and Senegal. Incidentally, all four of them were also very much at the BRICS Summit ( June 23-24) while India and South Africa are already the partners and the other two are aiming to join in a BRICS plus arrangement even though its NDB (New Development Bank) admitted new members and is going strong.

As the G7 +++ Summit will mostly focus on the Ukraine crisis and more measures against Russia and India’s approach that has not been to the liking of the West, may keep them guessing. India has maintained a clear and consistent and principled stand for peace, democracy and dialogue and early cessation of hostilities in the Russia–Ukraine war that is becoming insane by the day. The Western countries do not like the Indian stance and would rather see the exact opposite and toeing their line. But that is not going to happen.

Hence, PM Modi will be addressing some sessions and focus on the environment, energy, climate and green technologies, food, security, health, counter-terrorism, gender equality and democracy most of which were on the BRICS agenda as well being the global concerns. Some others like in the recent past may accuse India along with China of financing the Russian war machine least realising and willfully oblivious to their own bulky pounds adding to the pennies of India.

The sheer value and volume of European imports and that of even the US in certain areas is what makes the Russians confident even as they try to expand and diversify their own country-specific trade basket toward Asia. In this dog-eat-dog world only, a fool will not serve its own national interest.

This is the third consecutive G7 Summit to which India has been invited even though it has been part of the G7 outreach events since the 2000s. The first two being in France and UK. Given her fast-growing economic status, being the largest functioning democracy, a voice for the underdeveloped and developing countries and being the fastest-growing market — India has become a virtual reality at the G7. She has become an indispensable bridge with a moral and material authority despite some actors grudging her autonomy in status and stance.

In 2023, taking the mantle from Indonesia, New Delhi will be chairing and hosting the G20 Summit with a much wider remit and diverse stakeholders. Hence, in certain ways, this G7 Summit is a continuum and curtain-raiser for the G20 and would be a good learning curve on the shape of things to come and the choices to be made with regard to the future challenges among the geopolitical contestants. India’s strategic autonomy will obviously come in handy.

Former British Prime Minister Gordon Brown (2008) pitched for India’s inclusion in the UNSC and G8 by reiterating that “A Security Council without India cannot be a Security Council reflecting the reality of the day and a G8 that discusses the world economy without involving India can not be a G8 that is discussing all the details of what needs to be done in the world economy”. So did US officials like Karl Inderfurth or former French President Sarkozy. India has often been referred to as the Pacific’s true star as the pivot shifts strategically towards the South and the Indo-Pacific.

Given the fact that India also has strategic and super strategic partnerships with most of the G7 countries and is the largest democracy with a great economic heft and market, some calls have been made to expand G7 to G8 by including India unless G7 – although an informal group wishes to behave like a rigid alliance ridden with monologues and unifocal narratives. Moreover, PM Modi’s personal relationships with nearly all the leaders, including with the Canadian PM Trudeau this time, is a big plus. On balance, a wise interlocutor is any day better than the bevy of sycophants.