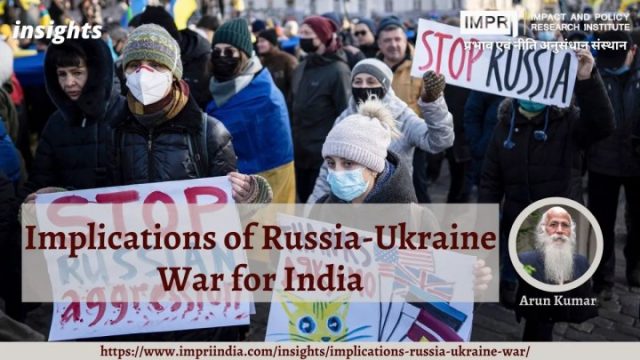 The Russian invasion of Ukraine is unlike the many ongoing conflicts in various parts of the world – whether in Arab countries or in Africa or between India and China. A military superpower, Russia, has decided to invade Ukraine which is backed to a certain extent by the US and NATO. While the latter have repeatedly stated that they will not send their troops to defend Ukraine, they are imposing tough sanctions against Russia and its rulers.

These will have long-term consequences. New elements will be introduced into the ‘new normal’ that the world was headed towards due to the ongoing pandemic. The implications will be both national and international and long term and immediate. The issues will be political and economic with inter-linkages between them. Since the war, directly and indirectly, involves many countries, the implications emerge from the international situation. It is within that framework that the implications for India and its people can be understood.

War has immediate consequences for global trade, capital flows, financial markets and access to technology. Sanctions being imposed on Russia by the rich countries will not stop the war and nothing much will change in the immediate. The real impact will be seen over time on political and economic relations between the two sides.

It is almost certain that the Cold war of the 1950s will reemerge between an Eastern Bloc consisting of Russia and China on one side and the Western powers and their allies on the other side. Since the world today is far more globalised than in the 1950s, the impact will be greater. It will also be more since in the 1950s the two blocs already existed while now there is a sudden major disruption.

Global trade will be immediately impacted by sanctions on both sides. Exports and imports will be hit and the existing supply bottlenecks due to the pandemic will aggravate. The Western powers are likely to insist on other nations stopping trade with Russia. For instance, they will ask other nations to stop their import of energy from Russia and threaten sanctions against those nations and companies that continue to trade with Russia.

This would include China, otherwise, the sanctions on Russia will not bite. Since China is the biggest trading partner for many of the rich countries, this will disrupt trade massively and lead to further supply bottlenecks. The US may act to increase the supply of petro products and ask friendly OPEC countries to also do so, to prevent prices from shooting up and disrupting the world economy.

Ukraine is a major exporter of agricultural produce and their supplies will get disrupted, leading to an increase in food prices. Commodity prices had already been rising and this will continue since some of the critical supplies come from Russia and China. Consequently, inflation will kick up globally and impact the purchasing power of people and weaken demand which was already hit by the pandemic. With liquidity ruling high due to the quantitative easing during the pandemic, inflation can kick up quickly. This will slow down global growth.

Global capital flows will decline since many countries would want their capital to invest at home rather than abroad. This along with the sanctions on financial flows will impact the financial markets. The stock markets will decline not only due to this factor but also due to increased uncertainty facing the world and the likely end of quantitative easing by Central Banks in the face of higher inflation and moves to increase interest rates. All this will adversely impact private investments.

Growth will be hit as a result of these adverse changes in consumption and investment. Budgets of nations will be impacted as military expenditures rise. The already high fiscal deficits in the budgets will rise further and most likely setback social sector expenditures which will impact the poor the most. Authoritarianism will rise in most countries on the grounds of the need for national unity and need for a strong leader to steer the nation through a crisis.

Dissent will be frowned upon and might have public support. A fall out of all this could be reduced attention towards the pandemic, which most nations are assuming is now in an endemic phase. The WHO has cautioned against this. Global vaccine inequity could rise in the name of national requirements.

The pandemic was forcing the world towards a ‘new normal’ and that is likely to have newer elements due to greater deglobalisation and greater competition among the two blocs. There will be greater distrust between the important nations on the two sides and cooperation on important world matters will decline. Already the pandemic had sown discord with some countries believing that the coronavirus was deliberately spread or leaked out of a laboratory. The hawks and the right-wing will gain ascendency.

China and Russia will get pushed closer to each other and given the strength of the Chinese economy and the technology available with Russia, the cold war will not be between very unequal blocs as was the case in the 1950s. So, potentially it could be more dangerous. Globally, the rich nation’s bloc will not be seen as a reliable ally since recently, the US deserted its allies in Afghanistan and now it has left Ukraine to fend for itself.

With two comparatively equal blocs competing for influence in the developing countries, the latter may get a greater degree of autonomy. But there will also be the danger of managed regime changes which can destabilise nations and aggravate conflict within them. This will accelerate the trend towards rule by authoritarian regimes.

The current moves to freeze the assets of Russians in Western banks and to cut off credit to their companies would force them to devise alternative international payments systems independent of the dollar. Those companies like the Chinese, which defy Western sanctions will also need such a payment system. So, two trading and financial blocs will emerge. The Chinese and the Russians have large foreign exchange reserves and a surplus in trade that they can successfully create a bloc. All this will have uncertain consequences.

With deglobalisation and a greater need for investment in the home countries, global capital flows are likely to decline with less going to the developing world. This may be partly compensated by the reduced flow of capital from the rich countries to China. But MNCs will make the developing world compete with each other for its capital by offering more concessions. This will work against the interest of the workers.

The military-industrial complex everywhere will be strengthened as militarisation increases. As more and more armament is used up in the conflicts and more arms are offered to countries, profits of these companies will rise. Producing more armament is like producing machines to destroy them to produce more. This will help overcome to some extent the shortage of demand in the world economy and boost employment.

With greater investment in armament, there will be a shortage of high technology for civilian use and that will slow down growth while raising inflation and decreasing investment in social sectors. All this will aggravate poverty in spite of more employment. Inequalities will rise further with workers getting marginalized and capital making higher profits.

Expenditures on R&D will increase and the technology companies will do even better than they did during the pandemic. Old style companies producing intermediate technology goods in the developing world will suffer as their exports decline with deglobalisation and production in the home countries.

Given these tricky developments and global uncertainty both in the short and long run, India will face a difficult situation. India will see an immediate impact on inflation (already ruling at high levels) with rising in fuel and food prices. Other prices will also rise as supply bottlenecks get aggravated due to sanctions and the war situation. The investment climate will deteriorate due to the uncertainty. Capital flows into the country will decline to lead to a further decline in the stock markets. The P/E ratio was already ruling at high levels and such a big shock was bound to hit stock prices.

Demand for gold is likely to increase leading to its increased import. This along with the high bill for petro goods will mean that the imports bill will rise. Exports are likely to be hit due to the decline in growth in the world economy and deglobalisation. With capital flows declining the Balance of Payment which was already turning adverse will deteriorate further. Consequently, the rupee will weaken compared to the dollar which will aggravate inflation further. All these factors, uncertainty, demand, investment, inflation and BOP, will reduce the rate of growth of the economy which was badly hit by the pandemic.

Budgetary arithmetic will also be impacted. While due to inflation the targets may be met, this would not be so in real terms after adjusting for inflation. Expenditures will increase while real revenues will be hit due to slow down and other difficulties. The already high fiscal deficit will increase further and in such circumstances, it is the social sector and capital account expenditures that are curtailed. The support to the poor then declines.

India depends on imports for critical defence equipment. It will face difficulty in procuring defence equipment already contracted since both the rich countries and the Russians will delay deliveries, given their own requirements. This will mean India’s preparation to face China and Pakistan will weaken. China could take advantage of this development and push India harder. Further, relations with both the US and Russia are likely to become tricky since we are forced to stay neutral between them while both expect support. While neither may antagonise India but the support that was available till now may weaken.

In the longer run, India will have to restructure its international relations in the new Cold War scenario and especially given the relations with China. That is India’s most important concern and not Ukraine’s. In fact, in the last two years while facing the Chinese obduracy we only got lip service from the Western powers and silence from Russia.

With deglobalisation impacting growth in the world, trade, capital and technology flows, India will have to strengthen its economy on its own. The public sector will have to play an important role since the private sector will not be able to boost itself on its own when demand is short. The country will have to strengthen its R&D which will require putting its education sector in order and the disastrous NEP based on substituting teachers by technology will have to be given up. Actually no matter how good a Policy unless the milieu is correct it would not translate into reform and the NEP only strengthens the existing milieu.

Social sectors will have to receive a much higher priority so that the productivity of workers rises and their degrading living conditions improve. That will not only provide the market for the growth of the Indian economy but strengthen the country. We would have to resist the temptation of the rulers to turn more authoritarian because that would only dissipate the nation’s energies.

First published in The Wire, What India Needs To Do To Deal With the Consequences of the Russia-Ukraine War, on February 26, 2022.

Arun Kumar, Malcolm Adiseshiah Chair Professor at the Institute of Social Sciences, New Delhi and author of `Indian Economy’s Greatest Crisis: Impact of the Coronavirus and the Road Ahead’. 2020. Penguin Random House.

The State of Finances of Cities in India – IMPRI Impact...