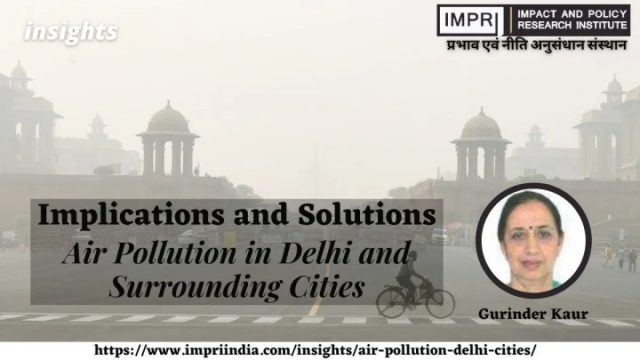 The IQAir World Air Quality Report: 2021, released on March 22, 2022, highlights that India’s capital Delhi has been named the world’s most polluted capital for the fourth consecutive year. Of the 50 most polluted cities in the world, 35 are in India and 10 of the top 15 most polluted cities in Central and South Asia are in India, four in Pakistan and just one in China. India also ranks fifth among the countries most affected by air pollution. India’s air quality is deteriorating day by day due to air pollution (World Air Quality Report, 2021).

Top 15 Most Polluted Cities of the World

This is not the first report which highlighted the rising air pollution in Delhi, National Capital Region and other Indian cities. Alas! Whenever some international organisation releases a report on air pollution in India, the government of India starts rejecting it outright. In 2014 the Environment Performance Index Report by the Yale Centre for Environmental Law & Policy of Yale University and the Centre for International Earth Science Information Network of Columbia University was rejected by the then Union Environment Minister, Anil Dave.

A 2016 WHO report was rejected by the then Union Environment Minister, Harshvardhan, saying such ranking is irrelevant. In 2019 Union Environment Minister, Prakash Javadekar, has gone still further in rejecting an international report of air pollution in India. When a Member of Parliament expressed concern over the rising air pollution in the country saying that if the government pays so much attention to clean air, people should not die prematurely from the diseases caused by it, Prakash Javadekar replied that air pollution has nothing to do with diseases and also said that no Indian research proves this fact but these critics are just scaring people. This irresponsible statement of Prakash Javadekar was also discussed at the international level.

At the 25th Conference of the Parties (COP) in Madrid (Spain) Maira Naira, Director of the WHO, said that people of all classes and ages are suffering from airborne diseases and their average age is also declining. At the same time, Maira Naira quipped that there is no research that shows that air pollution does not affect Indians and forgives them. Now the question arises that if air pollution does not affect Indians, then why do the Delhi and the Union governments blame their neighbouring states for Delhi’s pollution every year? Why are Delhi schools closed on high pollution days in winter? Why is construction work halted for some time? Why is there a need for an even-odd system of running vehicles on roads? and why is there a need to install smog towers in Delhi?

According to a report by Greenpeace Southeast Asia’s Air Quality, in 2020, 120,000 people in India died of air pollution-related diseases and the country suffered a financial loss of Rs. 2 lakh crores. As many as 54,000 people died in Delhi, 25,000 in Mumbai, 11,000 each in Bangalore and Chennai and 6,700 in Lucknow. According to a report by the State of Global Air 2020, 116,000 children in India could not even complete the first month of their lives due to air pollution. PM 2.5 is generally considered to be the most harmful air pollutant when it enters into our body through breath and causes diseases like asthma, brain stroke, heart, and lungs.

In September 2021, a study was conducted by Dr Arvind Kumar of Lung Care Foundation and Dr Sandeep Salvi of Pulmocare Research and Education Foundation (PURE) of India. Their study has revealed that in Delhi, Mysore and Kottayam, the percentage of children suffering from asthma, allergies and childhood obesity in highly air-polluting areas is higher than in low air-polluting areas. One in three school-going children in Delhi suffers from asthma, more than 50 per cent suffer from sneezing, 44.9 per cent from itchy watery eyes while 22.6 per cent of children in Mysore and Kottayam suffer from asthma. School-going children in Mysore and Kottayam have also a much lower percentage of air-borne diseases than Delhi. The percentage of diseases is directly related to the level of air pollution. Another research study was conducted by the University of Chicago in the United States of America, air pollution also affects the average age of individuals.

According to the World Air Quality Report released on March 22, 2022, Delhi is also the most polluted capital and the fourth most polluted city in the world. Among the ten most polluted cities in India, the other nine are Bhiwadi in Rajasthan, Ghaziabad, Jaunpur, Noida, Baghpat, Greater Noida in Uttar Pradesh, Hisar, Faridabad, and Rohtak in Haryana. Most of these cities are located around the National Capital Region. It is clear that the activities taking place in the country’s capital and the surrounding cities are responsible for the increasing air pollution here. Air pollution is mainly caused by vehicles, coal-fired thermal plants, industrial units, construction works, burning of waste dumps and the like.

The increasing number of vehicles in these areas is responsible for the increasing PM 2.5 concentration in Delhi and its surrounding areas. Although the Delhi government has announced to cancel the registration of more than one lakh diesel-powered vehicles older than 10 years, this will not solve Delhi’s air pollution problem as people have to use vehicles while moving from one place to another. The need for more vehicles has to remain, so the same number of new vehicles will come on the roads. Older vehicles will continue to run in the vicinity of the National Capital Region.

The only difference will be that new vehicles will run on the roads of Delhi. In order to reduce air pollution in and around Delhi, public transport needs to be streamlined and increased in proportion to the population. Doing so will reduce the number of private vehicles on the roads, which in turn will reduce the amount of greenhouse gases emitted by vehicles. Reducing the number of private vehicles will also eliminate the hassle of widening roads and creating new parking spaces.

The amount of greenhouse gases in the atmosphere can also be reduced by converting the vacant parking lots into green belts as the vegetation in the green belts will start absorbing these gases. Reduction in the construction of roads, under-bridges and overbridges will significantly reduce the pollution from construction works. The government of Delhi and the administration of surrounding cities should expeditiously shut down all coal-fired power plants to generate electricity and use renewable resources for this purpose and install air purifying devices in industrial units to ensure that harmful gases released from the industrial units do not endanger the health of people and pollute the environment.

The use of modern technology to deal with the piles of garbage, intuitive labelling of disposed of garbage before being collected, labelled as recycle, compost or trash, use disposed waste to generate alternate sources of electricity, use recycling technology to waste to give it a second life. With Delhi having an international airport, thousands of vehicles pick up and drop off passengers from neighbouring states every day, which emit large amounts of pollutant gases into the atmosphere. So, the union government needs to make arrangements to operate domestic as well as international flights from the airports of neighbouring states. Air pollution is on the rise in our country, we must take immediate steps to curb it.

Read more by Gurinder Kaur at IMPRI Insights on Counter Magnet and Satellite Towns are not Necessary for Shimla.