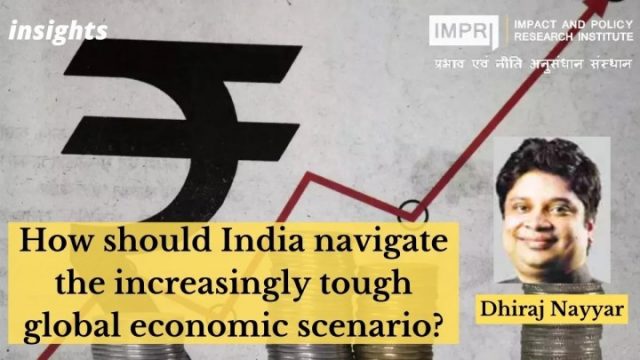 The global economy is in a tight spot, haunted by the spectre of slowing growth and accelerating inflation. In India, RBI finally threw its weight behind inflation, raising the repo rate by 40 bps and the cash reserve ratio by 50 bps. Already, a lot has been said about RBI being behind the curve. But is it really? And what can the GoI do to protect growth while battling inflation?

While it is true that India is among the fastest growing economies, the fact is that this growth is on a low base following two years of pandemic. Recently, growth expectations have been revised downwards by RBI and international agencies following the Russia-Ukraine war. Private investment and consumption, the two main drivers of demand, are hardly showing signs of overheating. If indeed there were signs of excess demand, it would be fair to say RBI is behind the curve. But that is not the case.

The reality is that there are two major factors that have led to elevated inflation levels, in India and the world. First is the side-effect of the monetary loosening in response to Covid that created an abundant supply of cheap money, a lot of which found its way into commodities and other asset classes. Since commodities, in particular, are fundamental to all production, there is an overall inflationary effect.

Second is the fallout of the war in Ukraine, which could not have broken out just as the world was beginning to grow out of the pandemic-induced slowdown. The effect of the war, sanctions and supply disruptions has put upward pressure on all prices, but of oil and wheat in particular, which are again a fundamental requirement of every economy.

The world is witnessing a fuel and food (more broadly commodities)-led inflation. Of course, Economics 101 tells us that it isn’t only actual price rise, but also inflationary expectations that ultimately determine the course of an inflationary episode. Interest rates are a blunt instrument to curb inflation caused by supply side factors. But they can rein in and anchor expectations. That would prevent a scenario of hyperinflation.

However, a hike in rates, now inevitable globally, will put downward pressure on growth. Other than monetary policy, the only other macroeconomic policy measure available to policymakers is fiscal policy. But almost every country has stretched its fiscal limits during the pandemic. Global debt is at record levels. Any further fiscal expansion will only put additional upward pressure on interest rates particularly in emerging economies like India. So, must growth be sacrificed to control price rise?

Politically, at least in India, inflation is far more damaging to governments than slow growth. While in the latter scenario (where growth is slow, but still positive), there may be a slower-than-desired rise in standard of living, in the former there is a very rapid decline in the standards of living particularly of the poor and lower middle classes. There is every likelihood of GoI being aligned with RBI in its latest decision in an effort to nip in the bud any possibility of double-digit inflation.

Fortunately, in India, policymakers have another lever to boost growth even if they are constrained with monetary and fiscal policy. It is microeconomic but with macro consequences — structural reform. To be fair to the government, a number of major structural reforms were implemented during the pandemic. But there is a lot more than can be done to unleash entrepreneurial potential and energy.

One option is to fast-track disinvestment, particularly privatisation. The efficiency and productivity gains to the economy will be massive. Second is to carry out reform of land and labour laws. This may be difficult at the level of the Union government. But Narendra Modi can persuade BJP-run state governments to implement aggressive land and labour reforms. Just as the timing is awful for macro policymakers, it is ripe for structural reformers as the world looks to diversify its production supply chains. The potential to attract job-creating manufacturing is huge.

Third, a new focus on health and education. This may not be the time to allocate more from the budget, but regulatory processes can be eased to allow private and foreign capital to enter. This will not only improve human development, but it will also be an active contributor to jobs and growth, as these are very large services sectors that have underperformed.

India can still find a sweet spot in an increasingly tough global economic scenario. But it calls for yet another round of deep structural reforms. Unlike many advanced economies, at least India has that additional lever.

This article was first published in The Economic Times as India needs to find a sweet spot in an increasingly tough global economic scenario on 4 May 2022.