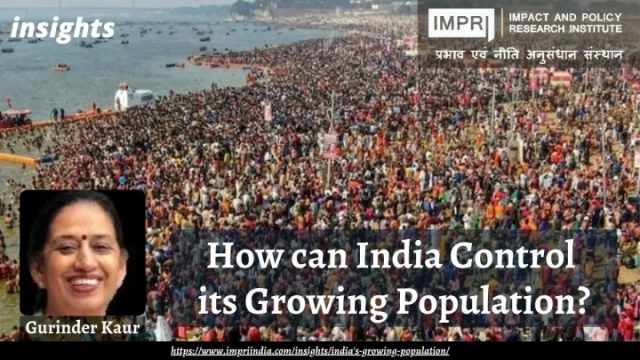 This slight increase in India’s population over China’s in 2023 will make India the most populous country in the world. According to this report of the United Nations, the world’s population will cross the mark of 8 billion on November 15, 2022. By 2038 it could be 9 billion and by 2080, 10.4 billion. The report also reveals that 50 per cent of the growth in world population by 2060 will occur in eight countries- the Democratic Republic of Congo, Egypt, Ethiopia, India, Nigeria, Pakistan, the Philippines, and the United Republic of Tanzania.

The top ten countries by population in 2022 are China, India, the United States of America, Indonesia, Pakistan, Nigeria, Brazil, Bangladesh, the Russian Federation, and Mexico. In 2050, China will slip from first to second, Indonesia from fourth to sixth and Bangladesh from eighth to tenth rank, while the United States of America will remain at third, Pakistan at fifth and Brazil at seventh rank in 2022.

The average age of the population of Central and South Asia, Latin America, and the Caribbean islands has decreased by 3 years between 2019 and 2021, while Australia and New Zealand have increased by 1.2 years due to lower mortality rates during this period. In Bolivia, Botswana, Lebanon, Mexico, Oman, and the Russian Federation, the average age has dropped by 4 years between 2019 and 2021.

In low- and middle-income countries, the birth rate has remained almost stable. Birth rates throughout the world have dropped dramatically already. The COVID-19 pandemic contributed to it by limiting all forms of migration.

After that, the world’s population will begin to decline. According to the report, China will remain the world’s most populous country for another year until June 30, 2023. After that China will control its population and scale down from the first to the second rank. India will move from the second to the first rank. It is not a matter of pride for India to be number one in terms of population, but instead it’s a matter of great concern as our resources are not increasing in proportion to our country’s population growth.

But even with this reduced fertility rate, China’s population was growing rapidly, which was very important for the Chinese government to control. As a result, the Chinese government strictly implemented the ‘One Child Policy’ in 1979. Although the policy was largely criticized around the world, China overcame population growth during the period between 1979 to 2015. In 2015, this scheme was completely stopped, allowing people to have two children and in 2021, three children.

After the implementation of the ‘One Child Policy’, China’s fertility rate dropped to 2.52 in 1985, and 15 years later in 2000, China’s fertility rate dropped below the replacement ratio (2.1) to 2.0. On the other hand, India, which started planning under the National Programme for Family Planning to control population in 1952, 27 years before China’s ‘One Child Policy’ (1979), achieved the replacement ratio in 2000.

Apart from the government’s National Programme for Family Planning, the reason for the declining fertility rate in India is also people’s perception of small families. Although no ‘One Child Policy’ has been drawn up and imposed in India like China, the National Family Health Survey-5 has revealed that the fertility rate in the 29 states and union territories of the country ranges between 1.1 to 1.9. This is a positive aspect of the Government of India in controlling population growth. To curb India’s population growth, the Government of India must ensure public health services, female literacy, and employment.

Increase in public health services will reduce infant and maternal mortality rates. According to the National Family Health Survey-5, still 11 per cent of children are being delivered at home and 24 per cent of children are deprived of vaccinations. Although reduction of fertility rate is an important aspect to control population growth, at the same time, infant mortality also affects population growth.

If a child dies early, it will affect both the fertility and birth rates, which will both increase because the parents will always be afraid of being childless. For balanced development of children, their diet should be rich in nutrients. In India, 36 per cent of children are underdeveloped due to lack of nutrients in their diet. Case in point, about 67 per cent of the country’s children are anemic.

Out of the states in India which have higher fertility rates than the replacement ratio, three states: Bihar, Jharkhand, and Uttar Pradesh have very low female literacy rates. Bihar has 49.5 per cent, Jharkhand 44.5 per cent and Uttar Pradesh 42.8 per cent illiterate women. There is a direct correlation between fertility rate and literacy rate. In states where the literacy rate of women in particular is high, both birth and fertility rates are low. Therefore, the government should ensure the education and employment of girls to control population growth.

The report concluded that the percentage of population aged between 25 to 64 will be higher in the developing countries. In India too, the percentage of population in this age group is higher than the other two categories, viz less than 25 years, and above 64 years. The government should provide maximum employment opportunities for this section of the population. Lakhs of educated youth are migrating abroad every year due to lack of employment opportunities in the country.

This international migration is resulting in brain-drain, capital-drain, and loss of demographic dividend. China has made such an arrangement in the country that almost every citizen gets employment according to their ability. China took full advantage of its large population to achieve a high rate of economic growth of the country. Our government should also take full advantage of this category (25-64 years) to increase the economic development of the country by employing them according to their ability.

To check the population growth, the government should implement the National Programme for Family Planning seriously. There is no need for the Indian government to strictly implement the ‘One Child Policy’ like China but provide guaranteed education and employment to its people. Proper implementation of family planning programmes is an important indicator of economic development. With the benefits of economic growth, people become aware and voluntarily reduce their family size keeping in mind the needs and facilities of the members of the family.

We don’t have time to think, we should act immediately to control the growth of our population. This would become possible by adopting a pro-people and nature-friendly economic development path.

Read another piece by Gurinder Kaur- How to Protect the World from the Wrath of Rapidly Rising Heat Waves? in IMPRI insights.

Read another piece by Gurinder Kaur- How to Improve the Low Ranking in India’s Environmental Performance Index? in IMPRI insights.

Read another piece by Gurinder Kaur- How to save India from the wrath of Heat Waves? in IMPRI insights.