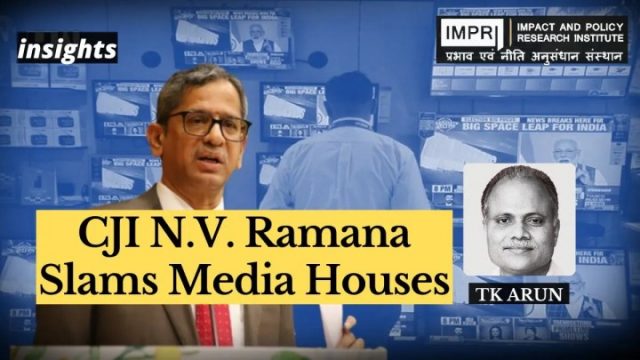 It is altogether tempting to agree vehemently with Chief Justice NV Ramana’s observation that the media runs Kangaroo Courts on subjects even experienced judges struggle with. However, in fact, the learned judge does injustice to both marsupials and journalists.

The conduct of sections of the media has been atrocious, indeed. We have seen that in cases that combined celebrity with alleged moral turpitude, such as Sushant Singh Rajput’s suicide or the Narcotics Control Board’s futile attempt to paint Aryan Khan as a drug lord.

As the public salivated for sensational detail, the media slobbered over what it dished out to feed that appetite. In cases where the atrocity of a crime leaves observers seething for retributive justice, we see the media fuelling the rage to a point where punishment matters more than punishing the guilty — in the Telangana gang rape of December 2019, when the police shot dead four alleged culprits ‘while trying to escape’, much of the media celebrated the killings, valorising the Telangana Police’s effort to play Avengers in a manner that potentially left the actual perpetrators at large.

In the controversy over alleged remarks against the Prophet, in the alleged crimes of journalist Mohammed Zubair against Hindu sensibilities, in conjuring up the bogey of a population explosion in India, and in countless other instances, large sections of the media have played a divisive, irresponsible role that damages democracy rather than serves as its Fourth Estate, alongside the Executive, the Judiciary and the Legislature.

Instead of informing and educating the public and posing the right questions to those in power, sections of the media happily serve to insulate the rulers from criticism by constantly criticising the critics and their bona fides. This entails reaching a summary judgment on assorted matters to exculpate those in power.

Is the solution for the media to hold its tongue and wait for the judicial pronouncement on any allegation of crime or impropriety?

The kangaroo gets roped into proceedings of arbitrary justice on account of its ability to bound across distances that make a human long-jump champion look lame. Arbitrary legal proceedings with scant respect for evidence and pre-determined outcomes are understood to leap over logic, due process and substantial proof. It is this metaphorical leap, rather than any lynching proclivity this grass-eating, cud-chewing cousin of the cuddly Koala harbours, that has produced this idiomatic association between the kangaroo and mob justice.

When sections of the Indian media combine in themselves judge, jury, prosecution and witness, that most certainly is not a welcome development. But what is the solution? Should they cease and desist altogether and wait for official press releases from the court registry to print the news? Or are there solutions available within the media itself?

Fact-checking websites are a good example of correctives from within the media. But the fact remains that a lie gains the credence of truth when repeated a thousand times on TV and a hundred thousand times on social media, which reproduces messages from other media, other parts of the world and from times past — even if countered by the odd fact-checking site.

If more responsible media sources proliferate and they stop shying away from calling out the false reportage that appears on other journals and sites, audiences would be trained to figure out which sources can be trusted and which ones should be disregarded. Right now, solidly reliable media sources stolidly refuse to scrutinise and criticise irresponsible coverage by other media sources, even as they themselves stick to the straight and narrow.

This must change. Media must accept that combating fake narratives is as much a part of the job of informing the public and holding those in power to account as laying out the facts and their context for their audience’s benefit.

If even this is not enough to counter irresponsible journalism, there remains the recourse of legal remedy. False accusations can invite the charge of libel. Now, this is a very sensitive territory, but not all that difficult to negotiate.

In the famous Sullivan case of the 1960s from America, the US Supreme Court delivered a unanimous verdict that serves as a guiding precedent for fixing the bar for media overreach. The New York Times carried an advertisement by supporters of Martin Luther King Jr, in 1960, against the highhandedness of the police in Montgomery, Alabama, against civil rights marchers. The Montgomery police chief LB Sullivan sued the New York Times for defamation, based on several factual inaccuracies in the advertisement.

The Alabama county court upheld the charge of libel. New York Times appealed in the Alabama Supreme Court, which endorsed the county court verdict. NYT took the matter to the Supreme Court. In 1964, the US Supreme Court ruled that when the plaintiff in a libel suit against the press is a public official, the charge of libel would stand if and only if the report in question was filed with actual malice, that is, with the knowledge that the report was false or with reckless disregard for veracity.

The mere presence of inaccuracies in the report would not suffice to sustain a charge of libel. Later, in 1967, in another similar libel case, the US Supreme Court expanded the meaning of the term public official to mean any public figure.

These principles have been upheld by Indian courts as well, most recently and lucidly by Justice GR Swaminathan of the Madras High Court. Where the public interest is involved, freedom of expression needs breathing space, and that means the press should be free to make mistakes, provided there is no actual malice, constituted by knowledge of falsity of what is reported or reckless disregard for whether what is reported is true or false.

The Chief Justice would be well within his rights to think aloud on irresponsible reportage by media, and warn it of legal consequences if it persists, but would fail to defend free speech if he does not, simultaneously, speak loud and clear of the high bar for determining that the media oversteps the limits of free speech—that of actual malice.

Justice Swaminathan’s ruling would automatically invalidate the framing of a libel charge against journalist Ravi Nair for his stories about the Adani Group. The company and its promoters are very much public entities and whether crony capitalism operates in India or not is very much a question of the public good. If the journalist has made mistakes in his reportage, the company and its promoter are welcome to nail them in court, but to hold him guilty of libel, actual malice would need to be established. For the police to frame such a charge even prima facie is to ignore the ruling of the Madras High Court on the expansive limits of press freedom with regard to libel.

When the media reports scams — for example, the so-called 2G scam or the coal scam — it is not on the basis of completed investigation and court verdicts.

As it so happens, the trial court found no evidence of the scam as alleged and has acquitted all those charged in the 2G scam. But the media relied on the misguided assessment of ‘notional loss’ by the Comptroller and Auditor General of India.

The allegation of a big scam in the allocation of telecom licences was a major factor in undermining the credibility of the UPA government, and served the political interests of the BJP and a new anti-corruption party, the Aam Aadmi Party. Did the media deliberately engineer this shift in the political mood, with premeditated malice towards the UPA? Few would think so. The media was doing its job.

It erred in not correlating with the scam allegation the Supreme Court’s reply to a Presidential Reference that followed in the wake of the Supreme Court order cancelling 122 telecom licences.

The reply to the Presidential Reference held that auctions are not the only or inevitable method of allocating public resources to private parties, thus undermining the basic assumption of the Court’s verdict cancelling licences.

The media, by and large, preferred to run with the notional loss thesis, ignoring the vast sums collected over the years as licence fees and spectrum charges as hefty shares of telecom revenues, and focusing on the ‘failure’ to hold auctions to collect charges upfront. The media stuck to this course, thanks, in part, to the pusillanimity of the UPA leadership, which not only failed to defend its defensible actions but also cancelled the spectrum allocation to Devas for high-speed satellite broadband, indirectly validating the proposition that spectrum allocated without auctions smelt of corruption.

What is relevant in the context of the Chief Justice’s charge against the media is whether the media behaved irresponsibly or not in raising the ‘2G scam’ as a matter of public concern.

The cause of transparency and public accountability is best served by a media that errs on the side of going overboard in identifying possible scams than by one that withdraws into self-censorship. Should the Chief Justice of India make pronouncements that turn the thermostat further down, at a time when trigger-happy arrests and libel charges against journalists already have a chilling effect on media freedom? India ranks 150th out of 180 countries in media freedom, as it is.

This article was first published in The Federal as Chief Justice Ramana gets it wrong on the media on 27 July 2022.