Home Insights Gold Monetization Scheme: An Unfinished Agenda
Facebook
Twitter
WhatsApp
Linkedin
Email
Print
By Raj Kumar and Dr. Arjun Kumar
India is the second-largest importer of gold after China. According to the World Gold Council (WGC), the gold consumption in India was around 750-850 MT in 2019, and in 2018, it was 760 MT, being almost entirely met from imports. According to the Economic Survey 2018-19, gold imports stood at 32.9 US billion dollars, comprising 6.4% of the total imports. Also, estimates suggest that more than 20,000 MT of gold lies idle with the consumers of gold in the country while India continues to increase its gold imports.
In this scenario, to reduce the dependence on imports of gold, the Gold Monetization Scheme (GMS) was launched by Prime Minister Narendra Modi on November 5, 2015. The objective of GMS is to mobilize the idle gold held by households and institutions in the country; and put this gold to productive use, which could have a multiplier impact on India’s economy and foreign exchange reserves. For instance, by monetizing the gold deposits, gold could be made available for the gems and jewelry sector and, over time, reduce the country’s dependence on the imports of gold.
The GMS is a revamped version of earlier existing ‘Gold Deposit Scheme’ (GDS), 1999, and ‘Gold Metal Loan Scheme’ (GML) linked together. But the performance of this newly launched scheme is not very encouraging, therefore sometimes people suggest that Gold Monetization is not practice/feasible in India due to socio-religious factors associated with Gold Demand.
This article discusses the structure of GMS, analyses GMS performance and its implications, and highlights the issues associated with the present structure of GMS and suggests the way forward.
Structure of the GMS
All deposits under the GMS shall be made at the Collection and Purity Testing Centre (CPTC). Depositors also can deposit their gold directly with the refiners that have facilities to carry out final assaying so that they can issue the deposit receipts to the depositor. However, at their discretion, banks may accept the deposits of gold at designated branches, especially from the larger depositors.
The depositor shall produce the receipt showing the 995-fineness equivalent amount of gold issued by the CPTC to the designated branch, either in person or through the post. On submission of the deposit receipt by the depositor, the designated branch shall issue the final deposit certificate. Institutions like temples or big depositors can directly approach the refiners also for gold purity certificate, which can be used to deposit gold under GMS.
Table 1: Term Deposit Plans under GMS and utilization of gold under respective plans

It must be pointed here that the deposits of gold, under the MLTGD plan, are accepted by the banks on behalf of the Central Government. For collection under MLTGD, the Central Government pay the handling charges[2] and commission[2] to the banks to cover the cost associated with gold deposits and ensure their meaningful involvement.
The structure for GMS is pictorially depicted below (Figure 1). There is a Tripartite Agreement between CPTC, Bank and Refiner regarding the modalities of acceptance of gold deposit under GMS. This makes CPTC a critical part under GMS as it is the first point of interaction with the customers.
Figure 1: Flow Chart of the Gold Monetization Scheme 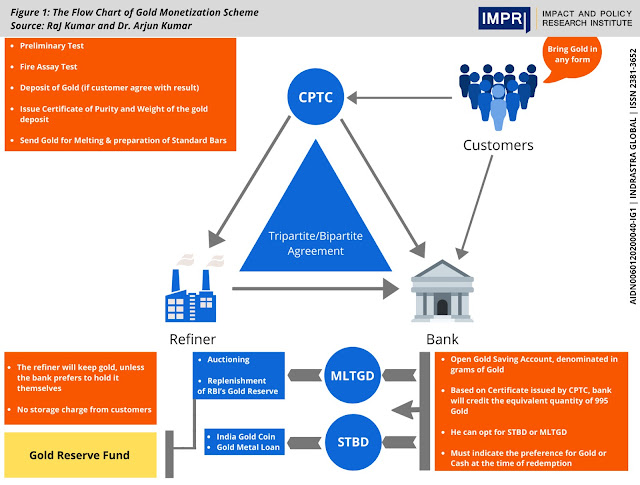 Performance and its implications
Mainly institutions like temples have deposited gold under different term plans of this scheme with about 50% deposits under STBD and other 50% under MLTGD. The fact that the gold is available with household/institutions is more than 20000 MT, total gold collected so far under the GMS is about 20 MT, negligible in comparison. This performance has raised concerns about the efficacy of the scheme altogether. These are reflected in the following insights:
a. Under STBD, banks have operational autonomy. Banks have been seen to pursue depositors for STBD despite the low-interest rate. Further, banks will be aggressive for STBD only if they can make some profit out gold collected and properly incentivized and remunerated. Moreover, banks can also be mobilized by providing operational autonomy even for MLTGD.
b. It has been observed that despite the initial delay in interest payment, handling charges and commission, due to procedure and administrative reasons, about 50% of deposit is under MLTDG, indicating that depositors/institutions are comfortable and confident with the government (with sovereign guarantee) dealing with MLTGD under GMS.
c. A more rationalized and progressive enabling interest rate structure on gold deposit under GMS would encourage institutions/depositors to join the scheme, especially under STBD (see current slabs in table 1).
d. Provisions of one-time incentives like commission and handling charges (as explained in structure diagram above) have limited effectiveness for continual expansion of the scheme and need to compliment upon adequate performance. While this provision is a necessary condition, more requires to be done towards making it sufficient for the success of the scheme.
e. Under GMS, retail deposits have been reported at a very low level. Clearly, CPTCs have not been able to perform and deliver their envisaged role in GMS structure, and hence, their role needs to be restructured so that it also builds confidence among banks and refiners.
In the next section, some issues with the present structure are discussed.
Issues associated with the present structure
a. GMS is targeting only the stock of gold and ignores the flow of gold in the form of imports (around 800-1000 MT annual). Consequently, the interlinkages between customers and jewelers are untraced.
b. The credibility of CPTCs is ignored (the entire structure of GMS is based on the tripartite agreement among banks, refiner, and CPTC. However, due to the low net worth of CPTCs, the credibility of CPTC remains an issue). The entire process of GMS assumes that bipartite/tripartite agreements will be enough to boost the credibility of CPTC. Nevertheless, the gold market does not function on credit, and it mostly works on cash advance. This ignorance has costed the entire GMS system and most of CPTCs are non-functional (de facto), and thereby leading to low retail participation in GMS.
c. The present structure focuses more on the ‘deposit of gold,’ and it seems that ‘utilization of gold’ aspect is treated as taken for granted, i.e. it rests on Say’s Law that underscores that if there is supply, then there will be demand, suggesting lack of wholesome planning for the success of GMS.
d. The classification of GMS into STBD and MLTGD is not logical. It merely reveals the government’s desire to deposit gold for the long term. But such classification has resulted in some costs which could have been avoided while achieving the same objective if alternative classifications had been adopted.
e. The intention behind the GMS is to motivate individuals to deposit their gold but at the same time, this process adopted under the GMS assumes that the government/banks will be in the best position to decide what depositor wants from their deposit. Therefore, this scheme does not allow the depositor to behave in a rational way and hence the Scheme has remained unable to persuade individuals to deposit their gold. As a result, the entire scheme has become more process-oriented while overlooking the core of the monetization aspects.

g. GMS also lacks clarity in terms of enabling the depositors to overcome the suspicion about questions being asked from the tax department etc. for support of the ownership document of gold or demonstrating income source for the same. Therefore, GMS needs to work towards an ecosystem of secure and safe gold deposits and monetization incorporating practical and on-ground situations and facilitating Ease of Gold Deposits, for different stakeholders by providing an adequate environment.

h. GMS should create an ecosystem of the bullion banking system in India. Many standard operating mechanisms and levers like repo or reverse repo kind of system can be applied to cover some part of the loss incurred by banks/depositors due to systematic failure or to regulate the gold market.

k. The efforts and progress made under GMS do not seem to be part of any severe medium or long-term vision linked with the financial system or macroeconomic management of the economy. Instead, it suggests GMS as a dull approach to desperately reduce the dependence on gold import in the short-term to tackle the current account deficit.

Summing it up
To summarize, the poor performance of GMS is not a reflection of its potential; rather, it indicates that the scheme requires additional thrust and willingness towards reforming its design, structure, strategy, planning, execution, and monitoring. GMS, which can not only reduce the import bills on a sustainable basis, can also encourage the deepening of financial markets, monetization of gold and making gold into an asset class.
At a time where the country has been facing economic slowdown and uncertainty in banking and non-banking financial sector, it is high time for reforms and innovative amendments in the GMS to make gold monetization more lucrative for the target customers that ranges from households, religious institutions, private institutions, importers and market players, incorporating suggestions from the industry and other significant stakeholders. The role of GMS can be instrumental towards the vision of ‘New India’ and achieving the goal of US$ 5 trillion economy.
About the Authors:
Raj Kumar is an Indian Economic Service (IES) officer and presently posted as Deputy Director at India’s Ministry of Electronics and Information Technology (MeitY). Previously he worked in the Department of Economic Affairs, Ministry of Finance, where he worked on Gold related issues.
Dr. Arjun Kumar is Director of Impact and Policy Research Institute (IMPRI), New Delhi.

Global Unemployment and Inequality during 1991-2019: Reflections from Secondary Data –...

QUAD must focus on Indo-Pacific security – IMPRI Impact and Policy...

Global Unemployment and Inequality during 1991-2019: Reflections from Secondary Data –...