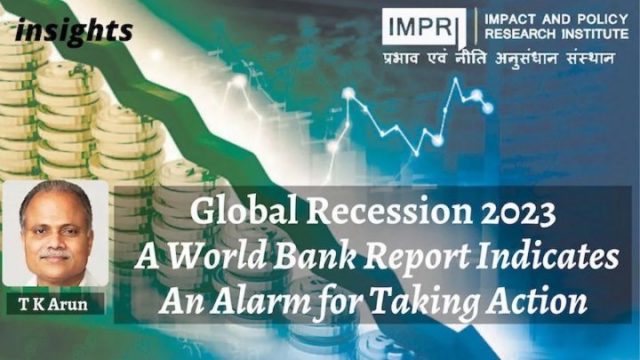 The report calls for some very delicately-balanced trade-offs in emerging markets and developing economies between fighting inflation and preserving growth.

The World Bank has come out with a report that holds out the prospect of a global recession in 2023, with world output growing slower than world population, and economies languishing before they have recovered to their pre-pandemic levels. The report calls for some very delicately-balanced trade-offs in emerging markets and developing economies between fighting inflation and preserving growth.

What the report does not spell out in so many words, but strongly implies, is that there are two sets of measures that can stave off recession. One is to allow greater immigration into economies like the United States that face a shortage of labour; the other is to stop the war in Ukraine, and resume normal supplies of commodities.

The report urges the following measures, apart from monetary, and fiscal measures:

2. Boost the global market supply of commodities, in particular, in supplies of food and energy while accelerating the transition of low carbon energy source economising on energy consumption

3. Strengthen global trade, removing global supply bottlenecks, and guarding against the threat of protectionism and fragmentation that could further disrupt trade networks.

In the US, a tight labour market forces up the wage rate, the wage increasing countervailing the effects of reduced demand from interest rate increases. The unemployment rate is a historical low of around 3.5 percent. Only by compressing demand ever more, by raising interest rates sharply, and, thereby, reducing the demand for labour and thus dampening the upward pressure on wages can inflation be contained — if one does not factor in the possibility of augmenting the domestic workforce with immigrants, large numbers of them.

Right now, immigration is a political hot potato in the US, with the Republicans accusing the Democrats of inaction on the waves of immigrants flowing into, or rather, seeking to flow into, the US from new hotspots of desperation, such as Haiti, Cuba, and Venezuela, apart from the traditional sources of migration across the country’s southern border, the Central American nations and Mexico. Some Republican governors of border states are sending the migrants who have crossed over into their territories all the way across to New York and Washington DC, to spite the Democrats.

But the fact remains that the pandemic led to the early retirement of lots of Americans, causing a fall in the labour-force participation rate. It is estimated that the workforce participation rate is 1.3 percentage points below the level of the pre-pandemic February 2020, and the decline is not just among the elderly, but across all age groups, including the prime working age of 25-54.

The easiest way to introduce some flex into the labour market stretched tight like a drum is to let in immigrants, only too eager to work, even if only at the minimum wage.

The cost-push inflation in energy prices is the product of Western sanctions on Russia, following that country’s invasion of Ukraine. Gas prices are soaring in Europe, in the wake of Russia squeezing supplies already, and possibly disrupting supplies further in winter. Russia has stopped gas supplies to Germany via the pipeline Nord Stream 1, but gas flows to Europe via Ukraine, along an older pipeline. That is ripe for disruption. Yet another pipeline, Turk Stream, supplies Turkey and Eastern Europe. Russia is unlikely to stop deliveries along this pipeline, given Turkey’s utility as a go-between, and some East European countries’ role in breaking European Union-wide unity on proposals such as a price cap on Russian hydrocarbons.

Ending the war would also free up stalled global trade, apart from that stalled by China’s Zero-Covid shenanigans.

Some food has started moving from the Black Sea to the rest of the world, but not the full range of exports from Russia, Ukraine, and Belarus — and that includes fertiliser, and fertiliser inputs, key to dampening food prices next year, metals and key metal products used in oil wells. Ending the war, and sanctions would resume exports from Russia, Ukraine, and Belarus, easing supply constraints on a range of goods key to taming inflation.

India can only champion such measures, but these are beyond India’s control. The World Bank also urges macroprudential measures to insulate developing economies from the spillover effects of monetary tightening in the rich world. This would be the right time to think of dampening volatile inflows of capital. The sudden exit of foreign portfolio capital leads to huge downward pressure on the exchange rate. The lower rupee leads to inflation, besides a stock market slide.

We can live with fluctuations at the stock market, but sharp rupee declines that make the entire range of imports more expensive are best avoided. It would be unwise to restrict outflows, or tax them. But it would not be a bad idea to levy a calibrated tax on portfolio inflows. That would reduce inflows and, therefore, subsequent outflows, alleviating sudden pressures on the exchange rate unrelated to anything happening in the domestic economy.

India must invest and grow more aggressively than at present. Economic slowdown in the rest of the world would push down the prices of many things that India needs, to build the new towns, roads, bridges and renewable energy facilities. India must import them, invest, build, and grow.

Growth is vital, to enable the poor to grow out of poverty. Prioritising inflation-taming to the point that policy chokes off growth would gladden the hearts of bond traders, but leave stomachs empty in large swathes of India.

Read another piece by TK Arun- India Overtaking Britain Economy: A Source of Satisfaction – Not A Situation to Brag Much About in IMPRI insights

Read another piece by TK Arun- Women being the Scapegoat in Every War: The Release of Bilkis Bano Rapists in IMPRI insights