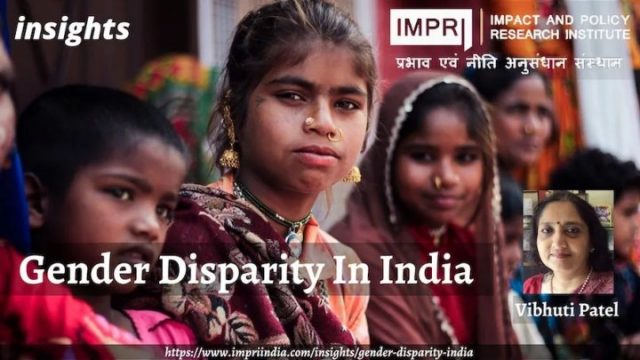 Census 2011 shows the child sex ratio among children of 0-6 years to be 918 girls for every 1000 boys in India. Pre-birth elimination of daughters is aided by new reproductive technologies. Gender disparity is a pressing issue in Indian society in 5 crucial areas- Health, Education, Employment, Safe and dignified life and decision making in private and public life. Even in the pyramid of poverty, women are at the bottom-the poorest among the poor. Girls are not encouraged to opt for Science, Technology, Engineering and Mathematics(STEM) subjects. Work participation of women in the gainful employment is abysmally low, currently 9 % as per the CMIE data. Among the working women, 92% are in the informal sector doing dead-end jobs.

Gender disparity has a profound effect on mental health worldwide. Some of the psychological effects of gender disparity include higher levels of stress, anxiety, depression, and post- traumatic stress disorder (PTSD) in women and people of marginalized genders.

With the prevalence of gender discrimination, and social norms and practices, girls become exposed to the possibility of child marriage, teenage pregnancy, child domestic work, poor education and health, sexual abuse, exploitation and violence. Many of these manifestations will not change unless girls are valued more. With improper education due to gender disparity, there has been disruption in the economic status of women. There is also less political participation of women. Women in politics are likely to bring welfare issues such as violence against women, childcare, and maternal health into consideration.

Changing the gender norms through progressive legislations and their judicious implementation, ensuring safety of girls and women in the family, community, schools and colleges and at the workplace, making content of education gender sensitive, raising aspiration of girls and mothers, recognition of ‘unpaid care work’ and decent wages for paid care-work are most important to address gender equality concerns. Gender equality has been proved to be the central driver of economic growth and human development. Improving gender balance is an important step for India’s development and its achievement of greater economic growth and gender equality.