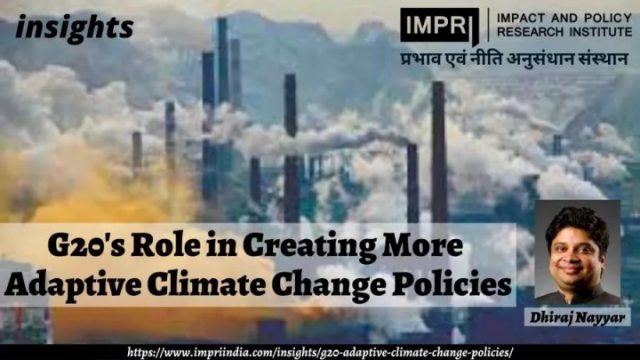 Much of the multilateral discussion and collective decision-making on climate change takes place at the annual United Nations Climate Change Conference (UNCCC), better known by its nomenclature of COP (conference of parties). There is a strong case to begin a parallel track, which radically changes the contours of the conversation under India’s presidency of G20. It is a terrific opportunity for India to lead the world into a more realistic pathway to achieving more concrete outcomes in the battle against climate change.

What goes in favour of COP is its inclusiveness since every nation in the world is a party. However, almost inevitably, every COP begins with a dire warning about global temperature rise and its consequences and ends with a rancour on who should bear how much responsibility, particularly regarding financing. It is relatively easy for countries to commit to distant net-zero targets without detailing the pathways to meet them.

Any discussion on the latter inevitably gets polarised between the advanced and emerging economies. And not without justification. The fact is that advanced economies have played a disproportionate role in creating the problem. But, in the end, outcomes, or the lack of them, are frustrating for all.

How can G20 contribute to Climate Change?

At first glance, G20 may not seem representative enough to address the climate change challenge. Can 20 nations decide on behalf of 195? Of course, it needs not-and should not -supersede COP. However, it can help move the needle in terms of creating pathways of feasible action, something that COPS don’t always achieve.

G20 membership contributes 85% of the world’s GDP. It also contributes to 80% of emissions. What these countries do to address climate change will make the biggest im- pact. They also have the financial muscle/GDP to take the lead. G20 is also the perfect forum to discuss the climate change issue in a somewhat different paradigm. The forum was originally conceived for finance ministers and central bank governors to convene on economic issues.

It was elevated to head of government level in 2008 after the Global Financial Crisis. Since then, it has become a talk shop for various issues, but the global economy remains the centrepiece. Can the focus of discussion on climate change be moved from the COP context of impending disaster and costs and obligations to one of the economic opportunities, business profit and a sustainable revival of the world economy?

The appetite for collective action is very limited. The world was not even able to coordinate an effective response to a once-in-century pandemic, particularly in the domain of vaccines. There has been little coordination to mitigate the fallout of the Russia-Ukraine war on energy or food prices. Governments across the world are constrained for fiscal space. There may not be much momentum for cross-border aid/ grants on climate change.

Where governments fear to tread, there is a case to make markets work. Ultimately, commercially viable technologies and innovations are the only sustainable pathway to sustainability. At least in the near term, no country will significantly subsidise another’s climate transition. But they may be willing and able to create the policy frameworks and allocate subsidies/ concessions within their borders to speed up the commercialisation of emerging technologies.

For example, achieving commercial viability in renewable energy (RE) took over a decade. From tariffs being several times those of fossil-fuel-powered energy, the cost of consuming renewables is now lower than fossil fuel-based power in much of the world. It is a for-profit sector that offers a better deal to customers while mitigating climate change.

That is the pathway other climate technologies need to travel, but faster. For now, electric vehicles (EVs) are much more expensive than petrol or diesel-powered cars of comparable size. Once the economics of that changes, as it has for renewable power, the transition to EVS will take off quickly.

In a nutshell, G20 members must use the platform to shape the narrative and discuss policies that make the entire climate transition an attractive economic proposition for firms (read: profits) and for consumers (read: lower costs). As the world grapples to emerge from a deep slowdown, the transition economy could be a sunrise sector that drives growth and creates new jobs. The one concession that G20 economies must make for the world is to enable technology transfer, which can be through commercial routes, investment, trade or licensing.

If G20 can create a favourable environment for the economics of climate transition technologies and products, then the noble goals of COP may become more readily achievable.

This article was first published in The Economic Times as Change Climate of Climate Action on December 12, 2022.