Home Insights Future Trading in Water: A Challenge to survival for the Planet and...
Facebook
Twitter
WhatsApp
Linkedin
Email
Print

In mid-December 2020, Wall Street began future trading in water for the American state of California. This was announced by the CME Group, a global markets company. Following this, the cost of water, so essential for life and survival will fluctuate just like the price of oil, gold, or wheat. Yet another gift of nature will now be up for sale in the speculation market, with a price that will depend upon the laws of availability and demand.

Water trading is the process of buying and selling water access entitlements, often ironically called water rights. The terms of the trade can be either temporary or permanent, depending on the legal status of the water rights. Some parts of the Western US, Chile, South Africa, Iran, and Australia already have water trading rights.

Future trading is about financial contracts which are obligatory. It allows the buyer to receive delivery of a particular asset or sell an asset at a pre-decided rate on a future date. This allows traders to speculate in the direction of the market.

In the case of water, the futures market will allow investors the right to purchase water at a specific price on a future date. Chances are that this could become a benchmark indicator of water stress in a region. In the American West, this will allow farmers, hedge funds, and municipalities to hedge bets on the future price of water and water availability. The trigger for this trade has been the drought and wildfires in states such as California.

For decades there has been a strong push to market and trade water as a commodity. The market is huge: The Business Research Company put the global bottled water market alone at a whopping $ 238 billion in 2017 and a CAGR (compound annual growth rate) of 9.99 percent between 2017-2021. In 2021, the market is estimated to be worth $350 billion. In India, this market reached around Rs 160 billion in 2018 and with a CAGR of 20.75 percent and is estimated to reach Rs 403.06 billion by 2023. This market is only for meeting drinking needs.

So far, there have been some successful pushback for water trade in several countries. This new move to speculate on a vital component of nature just adds to the limits that companies are willing to go to make profits, at the cost of the planet and the people.

The world is going through serious survival challenges:  Climate change, the COVID 19 pandemic and its fallouts, and the real risk of looming future pandemics. According to a paper recently published jointly by Dr. Fauci, the globally acclaimed director at the National Institute for Allergy and Infectious Diseases, and David Morens, epidemiologist we have in all probability entered what he calls the ‘era of pandemics.’ The authors for living in harmony with nature.

Climate change and the current pandemic share common features, cause, and effect. Both have painfully highlighted the importance of water. Both have heightened inequalities, between and within nations, and in India, also between the rural and the urban. The cause behind both are economic development models that unsustainably exploit nature. Both made it abundantly clear that there are limits to nature: If nature is hurting, so will humans. Unless collectively people of the world take care of the planet and its resources, we may not have a future to look forward to. Ecological scientists have lost no opportunity to stress that human health is linked to ecological health. 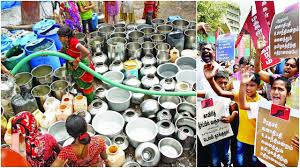 One of the major hits of global warming is going to be on the water. According to the United Nations, water shortages could affect five billion people worldwide by 2050.  If we continue in the current mode, demand will by far exceed supply. And when such a skewed equation comes into being, markets taking over this resource and speculating on it is a recipe for disaster.

This move to bet on water like a commodity is to demean it and use it as a tool for social, cultural, economic, and even territorial control. Severely criticizing the move, Arrojo-Agudo, UN Special Rapporteur on the Human Right to Safe Water and Sanitation said, “While there are on-going global discussions concerning water’s environmental, social and cultural values, the news that water is to be traded on Wall Street futures market shows that the value of water, as a basic human right, is now under threat.” The human right to safe drinking water was first recognized by the UN General Assembly and the Human Rights Council in 2010.

Can a value ever be put on water?

Water is more than a resource for survival: It is key for food security, health and hygiene, and economic growth. Water functions as the backbone of territories through rivers, wetlands, lakes, and aquifers, on whose sustainability our lives depend today more than ever in the scenarios outlined by ongoing climate change. It is a vital component of nature and its rejuvenation.

Natural rejuvenation is critical for our survival and development. The world over, water is linked and associated with civilization, culture, history, mythology, food, and way of life. It is associated with peace and happiness and what is held sacred. Can this resource so integral to humanity be up for speculation?

Proponents argue that the new market will clear up some of the uncertainty around water prices for farmers and municipalities, helping them budget for the resource. Yet, some experts say treating water as a tradable commodity puts a basic human right into the hands of financial institutions and investors, a dangerous arrangement as climate change alters precipitation patterns and increases water scarcity.

Water leads to peace and prosperity. Says Arrojo-Agudo, “Water has a set of vital values for our society that the market logic does not recognize and therefore, cannot manage adequately, let alone in a financial space so prone to speculation.”

As the voices for viewing growth beyond economic benefits and GDP are growing, steps such as this stymie the efforts. The focus and resources should be invested in augmenting and strengthening water resources and reducing water footprints, rather than speculation. The spread of this move should be avoided at all costs.

The article first appeared in Newsclick: Future Trade in Water Bodies Poorly for Earth and its Communities on January 7, 2021

Dr. Indira Khurana, is a water expert working with two and a half decades of experience and is based in New Delhi.