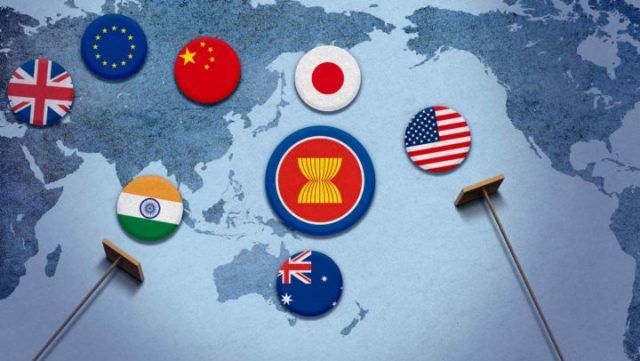 For more than ten years, the “Indo-Pacific” has grown in prominence as a geographical and strategic construct in foreign and security policy debate in India, Japan, France, the United States, Australia, and several Southeast Asian countries. Many consider “Indo-Pacific” as a new geo­graphical and geopolitical frame of reference that has begun to supplant the formerly dominating “Asia-Pacific” construct, at least in part if not entirely.

To highlight this important shift and address the issues that have arisen consequently, #IMPRI Center for International Relations and Strategic Studies (CIRSS), IMPRI Impact and Policy Research Institute, New Delhi organized a special lecture “From Asia-Pacific to Indo-Pacific: Issues and Challenges” with Prof. Chintamani Mahapatra under the series The State of International Affairs- #DiplomacyDialogue on 2nd November 2021.

The Rise of Indo Pacific

The discussion was initiated by the Moderator of the session, Dr. Simi Mehta who attempted to place the term ‘Indo-Pacific’ in its historical context. Quoting the words of James N. Mattis, the former United States Secretary of Defence that no one nation can or should dominate the Indo-Pacific region, Dr. Simi also points out that the US goal has very recently shifted to maintain US strategic primacy in the region. As a result, she opines, several questions have now arisen in this context, opening the floor for Prof. Chintamani Mahapatra to take the discussion forward.

Prof. Chintamani begins the discussion by talking about how operationally, Indo-Pacific is a relatively new concept despite the fact that it is intellectually rooted in German thinking. He points out that it was only in 2007 after the speech of the Japanese Prime Minister Shinzo Abe that the term grew in popularity around the world. However, in his opinion, this relatively new geopolitical construct is still evolving and each country has its own interpretation of the term.

He then talks about how this term has been heavily contested by several nations around the world. In fact, the term Asia-Pacific that was in use for the last 2 decades was also contested in the region, particularly by India. In the words of Professor Chintamani, India was uncomfortable with the definition of Asia-Pacific because despite having a long border with China and several other South-East Asian nations, India was not considered to be a part of the region, and consequently, was also declined membership of APEC.

Likewise, in his opinion, today when the term is being replaced by Indo-Pacific, several other nations like China and Russia, and the ASEAN countries are pretty hesitant in accepting it. While the former two countries thought of it as a ploy against China, the ASEAN nations were worried about losing centrality in the multilateral talks in the region. In fact, Prof. Chintamani states that even India did not accept the term immediately. However, this has changed since the Modi government came to power in 2014.

Prof. Mahapatra then attempts to highlight the fact that Asia-Pacific is subsumed under Indo-Pacific, and that the latter is in fact much larger than the former. He then points out that albeit the Chinese government’s opposition against the term for political reasons, Indo-Pacific is actually very relevant and crucial for China since most of its energy resources and raw materials traverse the Indian Ocean in order to reach China.

Issues and Major Developments in the Indo-Pacific

Prof. Chintamani then moves on to the major challenges in the region highlighting issues like terrorism, piracy, small arms proliferation, nuclear proliferation, drug trafficking, and most recently, the pandemic. He opines that as the pandemic is becoming a crisis of survival, the economic disruption caused by it is becoming the biggest issue in the region presently.

He also addresses the major policy-security developments in the region, primarily talking about two of them: 1) The relative decline of the US, and 2) the gradual rise of China. Keeping these two in mind, he mentions another development as a consequence.

Afraid of China’s growing and the USA’s waning powers, countries like Japan, India, Australia, and the ASEAN countries began to look for new avenues to pursue. Accordingly, in order to come to terms with the new developments, Japan looked towards India and Australia as reliable networks. Australia and India followed the same path and strengthened their relations with each other. As a consequence, new bilateral, trilateral, and quadrilateral activities began in the region. Similarly, two other trilateral movements that began in the region were 1) Japan, India, and France, and 2) AUKUS- Australia, the UK, and the US.  Beyond these triangles, another major initiative can be seen in the form of QUAD- the US, India, Japan, and Australia.

The Relative Decline of China

However, despite these developments, Prof. Mahapatra opines that in the near future, the world is in fact going to witness the relative decline of China as well. To back up his views, he points out the fact that most countries differ from China in very fundamental aspects, like for example their belief in a rule-based order, the UN’s Conference on Law of the Seas, peaceful resolution of disputes, developing an open and eco-friendly investment climate, and even ASEAN centrality for that matter.

He believes that these countries are also worried about several Chinese policies. He then spells these policies out to us: 1) China’s policies towards North Korea, 2) China’s engagement with the current government of Myanmar, 3) the debt-trap as put forward by China, 4) China’s cultivation of Taliban, 5) the muscle-flexing of China in the South China Sea and the East China Sea, 6) aggressive behavior of China vis-a-vis Taiwan, 7) the Chinese inefficiency in controlling the virus, and 8) the Chinese influence operations- penetrating into the media, universities and other institutions to create a more pro-China narrative.

In his opinion, China is using muscle-flexing abroad to build nationalist sentiments at home. Another concern that he addresses is the fact that China’s population might grow old before they grow rich because of the age and gender gap in the country. He also points towards China’s own grand economic problems at home citing examples of companies that have defaulted and contributed to the huge looming debt that China has fallen prey to.

China’s Response to the Indo- Pacific

Dr. Cleo Paskal then takes the discussion forward by talking about how these issues mentioned by Prof Mahapatra have actually shaped how the Chinese Communist Party looks at the world. She points towards the fact that Chinese weaknesses have now become evident and these can be pushed back supply chain resilience initiatives or the Quad, AUKUS, etc. because these initiatives challenge how China likes to operate which is to advance comprehensive power (of the party and consequently of the nation) bilaterally.

In her opinion, it is crucial to include the current state of Afghanistan in the Indo-Pacific discussion, as being a central Asian country, Afghanistan plays an important role in the Asia-Pacific because of its connectivity by land.

Besides all of this, Dr. Cleo also discusses a situation in the Solomon Islands (that switched from Taiwan to China in 2019) where Chinese political interference almost created a civil war in the last few days thus proving her point that their ability to destabilize across the region is indeed very high.

Indo-Pacific: Concept to respond to dynamics linked to China’s rise

Prof Patrick Köllner continued the discussion by giving his insights about the importance of the rise of China in actually evolving the concept of the Indo-Pacific. He compares the two terms Asia-Pacific and Indo-Pacific, placing the former in the age of globalization and economic interdependence in the region, the principal organizational expression at the time being APEC. In contrast, he places the latter as epitomized by the age that is shaped by geopolitical and geoeconomic dynamics that are linked to the rise of China, the principal institutional expression, in this case, being the QUAD.

He then lists the major developments in the policies of the Indo-Pacific, pointing out that the policies have 3 important dimensions: 1) developing a stable multipolar balance in the region that can accommodate both the rise in China and the fall of the US, 2) building and improving infrastructure in the region for better connecting parts of the Indian and the Pacific Ocean, 3) emphasizing the importance of maintaining commonly accepted laws of interstate behavior.

In his opinion, the term ‘Indo-Pacific’ is very different from the terms that were used in the past primarily because this term was mainly given by strategists. Therefore, the use of the term, he opines, is never a descriptive or value-neutral one, it is not a region that is clearly demarcated.

They did this, in his opinion, by enlarging the space and including the Indian Ocean and India into the picture.

At this juncture, Prof. Mahapatra points out that from the Indian perspective, the Indo-Pacific is neither viewed as an exclusive club of powers nor as a strategy. It is in fact viewed as all-inclusive.

The leaders of the 4 countries discuss everything from economics to climate change to vaccinations, that is, everything except military assistance which is to say that the effort of the QUAD is not limited to security and is indeed very comprehensive.

He also mentions the fact that the rise of China does not necessarily mean the decline of other nations. While China is rising, India is also rising. He also goes on to agree with Dr. Cleo that the decline of China is also dangerous for the world and that if the Chinese economy falters, the global economy is also bound to suffer.

The Role of the European Union

Prof. Patrick talks about the shared interests of the EU and India. In that, both are not interested in seeing this space dominated by a rising China. Both are in fact interested in a multipolar order in the region where the interests and perspectives of all players involved are respected.

According to Prof. Mahapatra, the role of the European Union is very crucial to developing a multipolar structure in the Indo-Pacific. The presence of France, Germany, etc. will prevent the rise of the US vs. China dynamic. He opines, therefore, that the active participation of the EU in terms of connectivity, investment, and overall involvement is very important to ensure peace and prosperity in the region.

Responding to a question on India’s outlook on Indo Pacific development Prof Mahapatra opined that India has already emerged as an important global player and looks at Indo pacific as a geo-economics construct where India can be an active player for peace, stability, and Prosperity. He underlined that India wants to constraint Chinese negative activities, to enable Chinese positive participation in Indo pacific for co-prosperity.

Prof Patrick shared his views that increasing convergence of interests and shared values offer scope for deepening India-EU cooperation in the region to secure global commons, maintain stability, and support economic prosperity in a cooperative manner and together shape a stable multipolar order.

Acknowledgment:  Palak Bothra is a Research intern at IMPRI